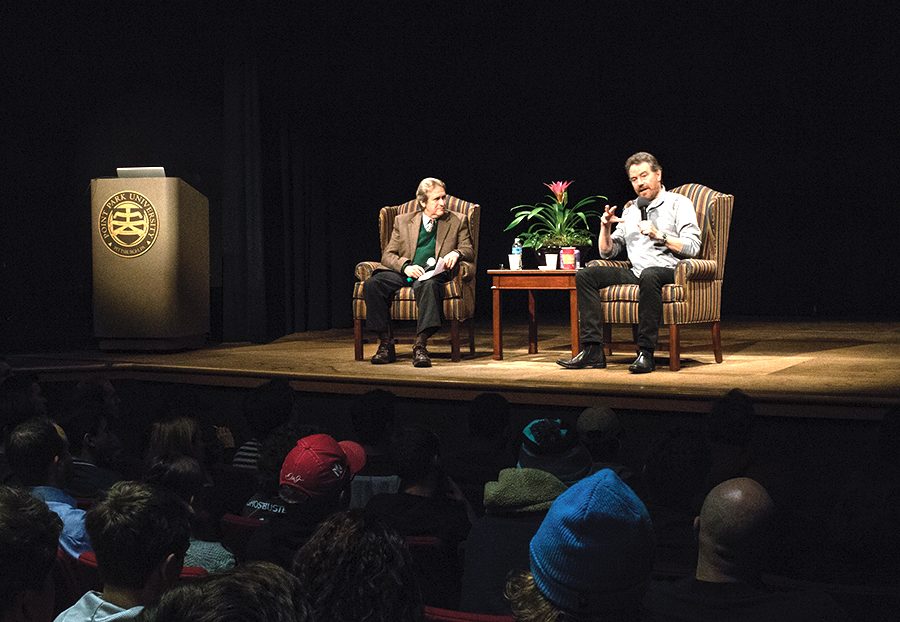 Cinema professor Steve Cuden shared the George Rowland White (GRW) Theater stage with Bryan Cranston, an actor and director known for his roles in Malcolm in the Middle and Breaking Bad, for a Q&A session where he shared stories and from his career on Nov. 16.

While students in the cinema and performance departments were the intended audience for the panel, the GRW auditorium was filled to capacity with students from all different majors to see Cranston. Cuden asked Cranston questions about his life experience, to which he replied in an often humorous manner, to the delight of the crowd.

Students in attendance also had the opportunity to ask questions about getting and maintaining a career in show business, and about Cranston’s life experience in the industry, including how to make a name for oneself coming out of college.

Junior cinema major Dave Randolph asked Cranston what mistakes he sees directors make in the professional world and how to avoid them. Cranston answered by saying that directors should also have experience in acting so they have a better understanding of how to direct.

“How dare [a director] tell me a piece of direction when [he has] never been in my shoes,” Cranston said, telling Randolph, whose concentration is directing, to take acting classes to become better at directing.

Although it was an unanticipated answer for Randolph, he said it actually excited him and that he took Cranston’s words to heart, as he said he will “probably take an acting class now.”

“[Cranston] made me realize how important it is to love what you do, it just burned my passion even more,” Randolph said. “Plus, Walter White said, ‘how dare you’ to me. That’s amazing.”

In terms of acting, Cranston shared that he originally went to college with the intention of becoming a police officer, but changed his mind when he had his first acting class where he got to kiss a girl he did a scene with. Later on in his career, Cranston said he got experience through “people watching.” Cranston said he would go to hospital emergency rooms to see the ways people act to use scenarios from real life in his own acting. He also advised that actors never stop working to stay focused and confident.

“I tell actors all the time, and this goes for writers and directors too, that they should never be bored; there’s always something you can do as a writer or actor,” Cranston said.

Senior musical theater major Gabe DeRose asked for advice about being an actor going out to Hollywood to begin a career.

“If you don’t love what you do – I mean love what you do – do not attempt to do it,” Cranston answered. “Not every one of you in this room is going to be successful in the profession you choose, but if you do love it, if it moves you, motivates you and empowers you, you must try it.”

DeRose said this experience was moving for him.

“I find myself very nervous about going out into the real world, but I think his words will really resonate with me for my whole career,” DeRose said.

Throughout the session, Cranston implied and also said directly that being a professional is not about fame or money, but about feeding your passion.

“You’re not here to get a job; you’re here to do a job,” Cranston said, remembering a piece of advice he got when he was just beginning his career.

Sophomore dance major Laura Barrett said she was in tears by the end of the panel.

“I was in awe of what he was saying,” Barrett said. “He was very positive, very funny, very intelligent…and he knows what he’s talking about and he really respects his craft.”

“The best message I got from him was that if you’re good at something, take pride in it,” Turk said on Cranston.

Cuden got in touch with Cranston to speak at Point Park through a mutual friend. Cuden, who said “Breaking Bad” is his favorite show of all time, was also excited for the opportunity to meet Cranston. The two met privately for 20 minutes prior to the Q&A session.

“Meeting him was just a great thrill, even though he is just another person, but someone that I admire enormously,” Cuden said.

Cuden said he thinks Cranston’s views about passion for your career applies to anyone, not just in cinema, acting or show business in general, and found it fascinating.

“I thought much of what he said was extraordinarily inspirational, and I heard many students say ‘oh my goodness, wasn’t he inspiring?’” Cuden said.

Cranston ended by saying that success eventually finds those who work for it.