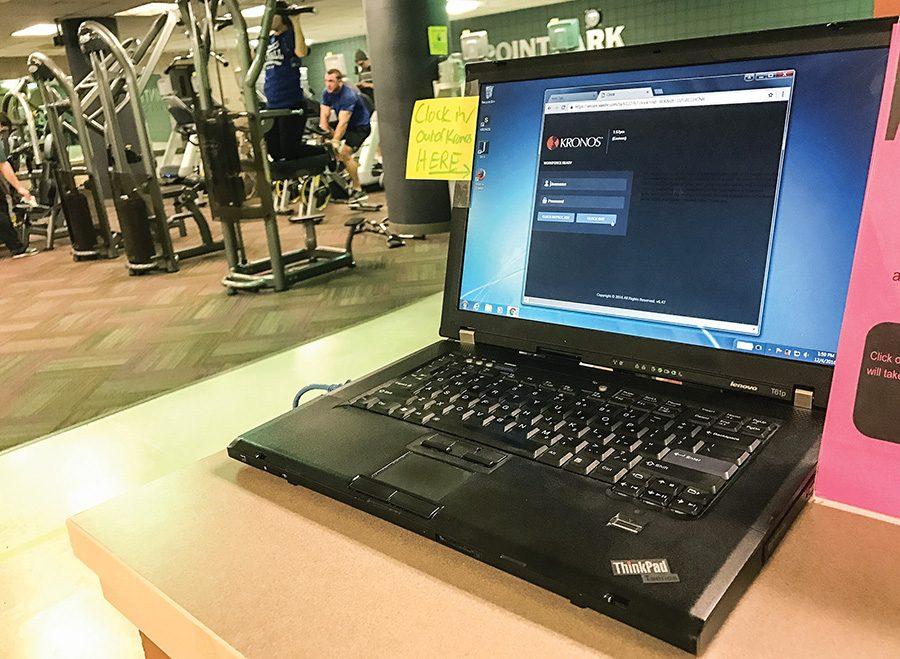 A laptop dedicated to the Kronos clock-in and clock-out system to track student work hours sits in the Student Center fitness center. Some student workers have had issues with the new software.

After acquiring a program called Kronos to log work study hours in replacement of timesheets, some students have experienced issues throughout the semester regarding the new system’s efficiency.

Most commonly, work study students have struggled logging into the system despite entering the correct username and password as well as accurately tracking hours. As a result, supervisors have had to manually edit the hours not properly logged through the system.

The university decided to switch to Kronos in response to the “unreliability of the timesheet” leading the university to “seek other means for capturing hours worked,” according to an email sent to the Globe by student employment coordinator Joan Dristas.

Timesheets in previous years were completed on paper and in a spreadsheet that would later require the work study supervisor’s signature before submission.

“While Kronos added minor expense, it allowed the university to be more efficient and to improve the timeliness and processing of timesheets,” Dristas said. “Once time is logged, student workers submit their timesheet electronically, and supervisors approve electronically. The supervisor has easy access to the timesheet and can check, edit and approve it right through the Kronos website.”

In practice, a handful of students have encountered difficulties accessing the server.

Catherine Huffman, a sophomore technical theater and dance double major, said she was unable to log in during the first two weeks of using Kronos.

“There have been multiple situations where my supervisor had to edit my hours,” Huffman said.

Working toward the completion of her apprenticeships, Huffman is employed at both the dance and playhouse costume shop; only the former has allowed her to successfully log in on the computer.

“The university was made aware that a small number of students, primarily at the Playhouse, were having difficulties with the Kronos system,” Corsaro said. “As a result, we are offering students access to a phone app that will correct the issue.”

Huffman was one of the select number of students permitted to use the Kronos app due to the limited number of computers at the Playhouse. While it allows quick, convenient access to clocking in, Huffman has yet to experience success getting past the home screen.

Junior funeral services major Patrick Fischer has also downloaded the app, but has yet to test its efficiency.

While traditionally clocking in on the computer, Fischer has also repeatedly asked his boss to edit his hours and had to revert to using the old timesheets.

“[Kronos] saves a lot of time and paper, but I feel like there’s something better that allows us to change something if we need to,” Fischer said, noting Kronos is “good in theory.”

Other issues can be addressed by emailing [email protected], although the program was described as “just a big adjustment” at the beginning of the semester along with  “a learning curve in the process to log in, change a password, and clock in,” according to Dristas.