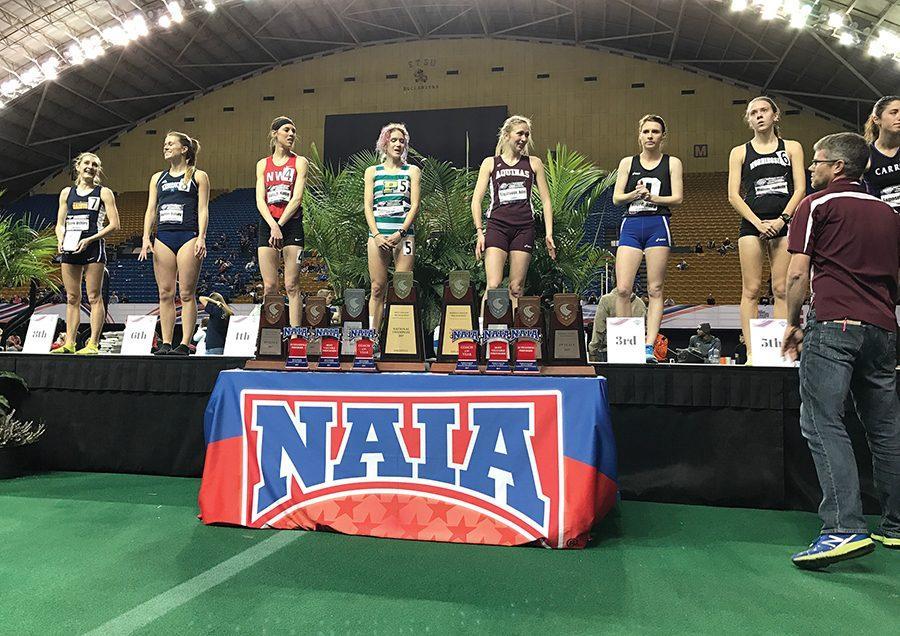 Anna Shields had a spring break she will never forget.

It was hardly a break, though. She was busy earning All-American status at the 2017 National Association of Intercollegiate Athletics (NAIA) Indoor Track and Field National Championships.

She claimed second place in both the mile and the 1,000 meters Saturday to earn All-American honors, becoming the first Point Park track athlete to complete the milestone.

The 26-year-old sophomore is in her first year at Point Park, where she has been able to reignite her passion for running and improving.

She was one of the best high school runners in New England during her junior year in 2008 and committed to run at the University of North Carolina.

A series of injuries and illnesses her senior year led her instead to attend Central Connecticut State University. After a frustrating freshman year, Shields redshirted her sophomore year and had a heart-to-heart talk with her coach.

She decided to take a break from running, moved into her own place and got a job at a bank.

“I just didn’t think I had it in me to do it anymore,” Shields said.

After competing in some races in 2015, she realized she still had potential to run at a high level. She then joined her former high school track coach as an assistant and discovered a passion for coaching.

But coaching opportunities are limited without a college degree, especially at the college level. She sought out Point Park, the closest NAIA track and field program to her Connecticut home.

A selling point for Shields was the excitement level of Head Coach Kelly Parsley at the prospect of signing her.

“He had a lot of faith in my potential, even though I hadn’t run track in a long time,” Shields said. “That excitement is really infectious.”

She signed with Point Park in June 2016 and began running on the cross country team in the fall, all while looking forward to track season.

When she got to the indoor season, Shields didn’t take long to begin dominating on the track, emerging as one of the top runners in the NAIA.

She started to see improvement, qualifying for six events at nationals.

“I got to do what I love,” Shields said.  “Yeah, there’s a lot of pressure I put on myself, and I was nervous. It’s amazing that I even get to be here. I was thinking about that a lot.”

She was joined at the meet at East Tennessee State University by five teammates from the Point Park men’s and women’s track and field teams.

Among those was Jryi Davis, who also had an unforgettable weekend.

Davis jumped 14.44 meters in the triple jump, giving him a sixth-place finish and NAIA All-American honors. He is the first field athlete in Point Park history to earn the honor.

“It was so amazing to watch,” Shields said of Davis’ jump. “I had tears in my eyes. I was so happy.”

It was an all-around happy weekend for the program that once again made history.

You can bet Shields isn’t done achieving on the track. And she’s optimistic for the team looking ahead to outdoor season.

“I’m really proud of how everyone on our team did (at nationals),” Shields said. “They were all amazing. I think that we’ll get to do it again.”