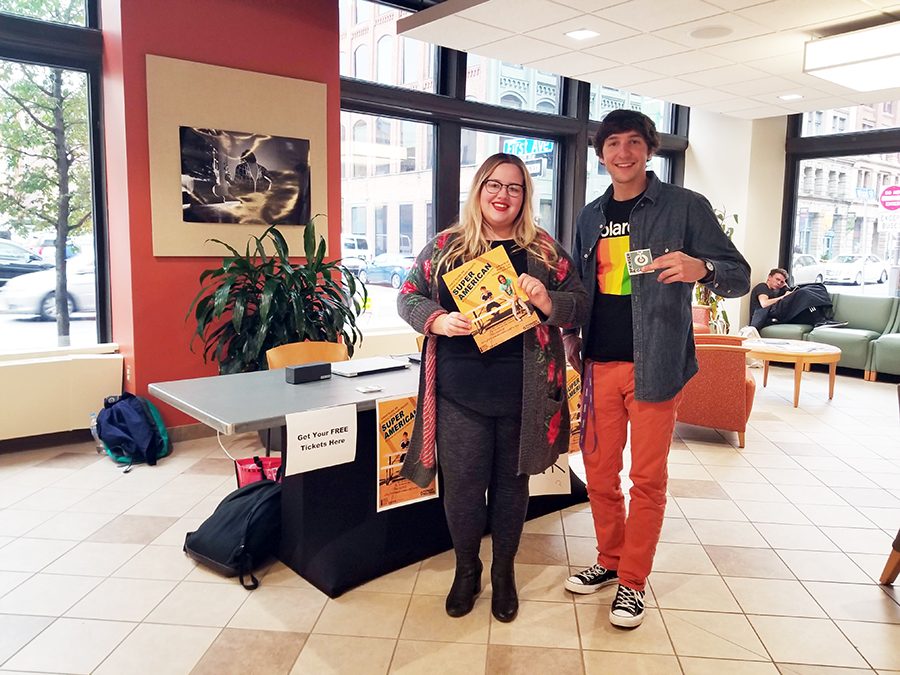 Kylie Koch and Chase Barron give out tickets in the West Penn lobby Thursday for an upcoming show at the Pittsburgh Playhouse featuring Super American, Young Lungs, and Chase and the Barons.

Young Lungs, a Pittsburgh based hip-hop artist, and Point Park’s own Chase and the Barons will be opening the show.

This is Pioneer Records’ and CAB’s first collaboration. Booking a national act is something they are proud of, according to Kylie Koch, marketing and public relations apprentice for Pioneer Records.

“It’s nice to have them in the title,” Koch said in an interview at their promotional table in West Penn Lobby last Thursday. “Because [Super American] is under the Warner Bros. umbrella, we were able to use that connection to book them at the Playhouse.”

Pop-punk isn’t the only genre to look forward to in the Rockwell Theater. Hip-hop will make an appearance with Young Lungs – to the delight of Royce Jones, sophomore broadcast reporting major.

“Maybe I’ll go if there’s a rapper,” Jones said in an interview in Academic Hall on Monday. “I hope they bring in more music like rap, R&B and soul.”

In an attempt to bring variety to their show, Chase and the Barons are hoping to add their own spin to modern classics, as well as playing some originals off of their upcoming album, according to Chase Barron, the lead vocalist of the band.

“We try to play the catchiest songs, especially ones where we can feature our sax-man Tyler [Handyside.]” Barron said in an interview last Thursday. “Some of the most receptive [original] songs we’ve played so far have been ‘Backseat’ and ‘A Day Off / Treehouse.’”

Ultimately, Chase and the Barons just want their audience to have fun – this upcoming show being no exception.

“We are really trying to take a humanitarian approach with our music,” Barron said. “Our music can be something that helps people forget how crazy the world is.”

The Barons’ quirky and bright outfits are one way they distract crowds, and some in attendance may take this opportunity to “go all out” as well.

“If I can wear glitter, I’ll be there,” Jones said.

Pioneer Records and CAB’s attempt to appeal to music fans of multiple genres gives them high hopes to bring in a full crowd.

“Tickets are free for students, so we are really hoping people take a break from school to come and check it out,” Koch said.