Full-time student has big future in the limelight, friends say 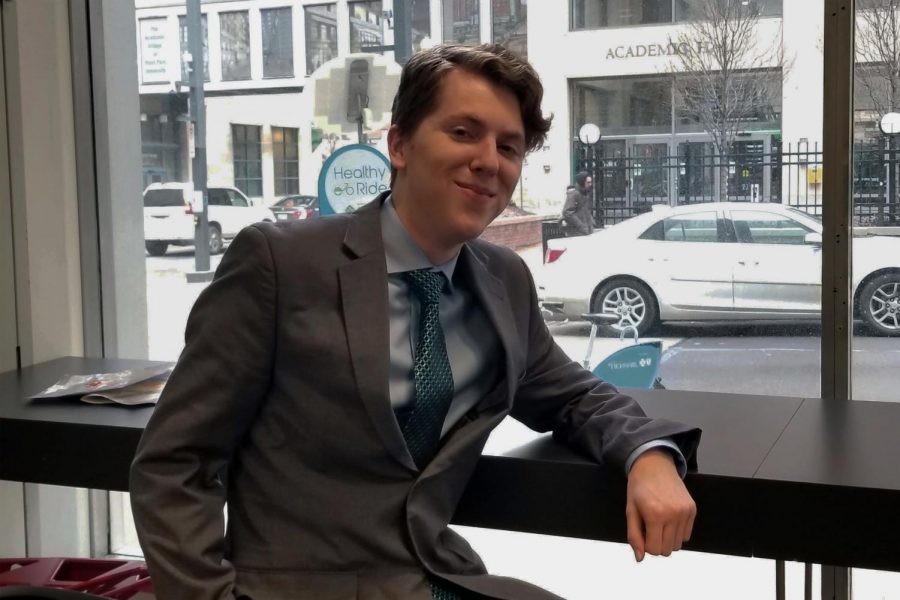 Sophomore Jake Berlin poses for a picture in the Center for Media Innovation on campus.

Jacob Berlin is a student known across campus for his larger than life personality. At first glance, one can immediately sense his radiating ambition.

Berlin, sophomore mass communication major, has a busy life in addition to his studies. From a young age, a passion for mixing tracks has been a role he’s continuously molded with the ability to pump up an audience when DJing shows.

When he’s not spinning records, he’s suiting up and discussing new policies as the youngest member of the school board in his home district of New Wilmington, Pennsylvania.

If he has an extra moment in his hectic schedule, Berlin performs stand-up on comedy stages around Pittsburgh, an outlet he finds he has the most freedom to explore new content.

Berlin’s hobbies and responsibilities carry a common thread he employs as a talent and passion – communication and relationship building.

“I really love any job that I get to talk to people,” Berlin said in an interview at the Center for Media Innovation last Thursday. “I try to look to people who I’d like to be like in my career and follow their steps.”

Berlin cites Seth MacFarlane as an influence, but recognizes the importance of looking for inspiration at every opportunity.

“I’m always trying to meet new people I respect and admire,” Berlin said. “Go wherever you can to meet people that help you grow as a person. Join as many clubs as you can. If anyone significant is in Pittsburgh, stand outside the stage door with a resume in hand.”

Berlin has been backstage himself quite a few times, performing at the Rex Theater in Pittsburgh’s Southside on multiple occasions as well as hosting his own rave in Lawrence County, Pennsylvania.

Cliff Rogel, who grew up with Berlin in New Wilmington and has done lighting work for his shows, said they were able to create a full experience for those in attendance.

“We were two kids that were pretty different; I had the technical knowledge and he had the knowledge of the crowd,” Rogel said in a phone interview last Sunday. “Jake has the personality to hype up the crowd and take things to the next level.”

The duo were able to sync tunes, lights, projections and video to mimic what live performances offered.

“We constantly looked at what big stages and production companies were doing,” Rogel said. “We strived to recreate that feeling in our gigs – even using snow guns and pyrotechnics in some of our shows.”

According to Rogel, Berlin’s DJing even caught the attention of Electronic Dance Music icon, Deadmau5.

This isn’t the only run-in with fame Berlin has had. A quick glance at his Instagram profile shows meet-ups with online celebrities – most recently Khloe Kardashian during a visit to Cleveland.

“I haven’t DJ’d for anyone famous yet,” Berlin said with a laugh. “But maybe I’ll get an invitation to Khloe’s baby shower.”

Though Berlin has visions of grandeur for his future, he still places importance and value in his grassroots work over the last two and a half years as a chairman of the buildings, grounds and security board in Wilmington County.

“I ran a write-in campaign the night before by just texting everyone who I knew would support me,” Berlin said. “I was inspired by working on Bernie’s campaign in Pennsylvania, West Virginia and New Jersey.”

Though his position isn’t quite as glamorous as he expected, Berlin carries his charisma into every endeavor.

“I find politics fascinating,” Berlin said. “It’s not always like what you see on CSPAN, it can be messy and discouraging but I always do the best that I can.”

His comedic performances seem to be one of his main outlets to let loose and have fun.

“My brain is always running; I’m always jotting down notes,” Berlin said. “It’s an outlet for being darker in my humor and an excuse to be edgier.”

Berlin has performed at comedy clubs around the city, including Hambones, Scarpaci’s and Trundle Manor.

As far as his studies go, Berlin has remained a successful student despite his many obligations, according to one of his favorite professors, Bob O’Gara.

“Fundamentally, he’s a very good student,” the public relations and advertising professor said in a phone interview last Monday. “He’s eager to learn; it’s positive to be a very inquisitive at this age.”

Berlin, who aspires one day to become a game show host, is someone who seems to make a heavy impression on those he comes in contact with, according to Rogel.

“Undoubtedly, I see him as a celebrity someday,” Rogel said. “He’s different from anyone I’ve ever met – seriously.”