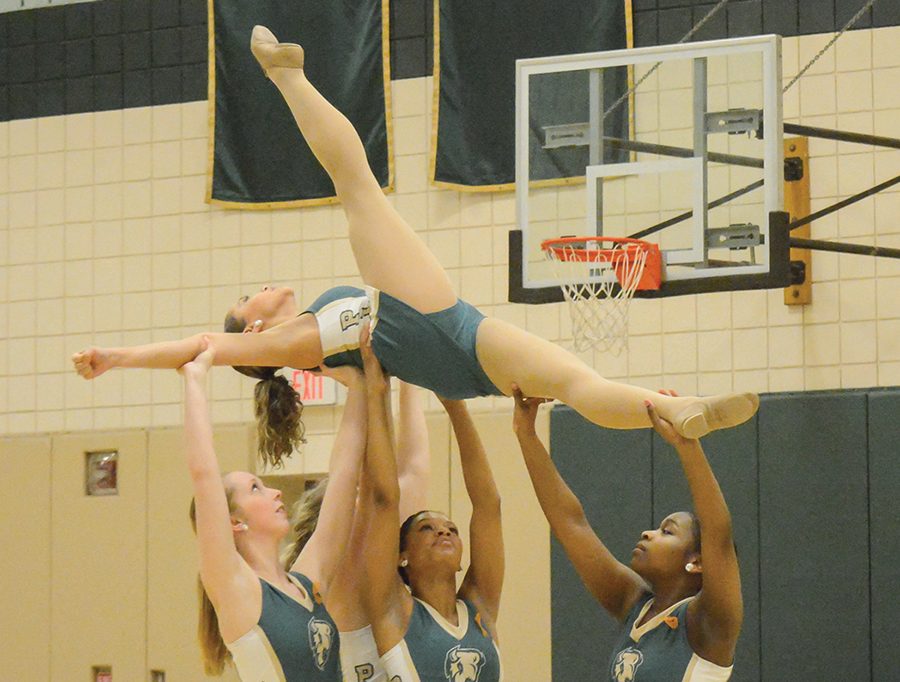 The dance team performs at Sunday’s Cheer and Dance Showcase, used as a dress rehearsal before the team competes at regionals.

Family, friends and students filled the Student Center Gym Sunday to watch Point Park’s competitive cheer and dance teams perform for the first time outside of a basketball game this year in Pittsburgh.

“A lot of our competitions are out of state and not local so this is definitely the time to have our families and friends come together and showcase what we have and what we’re bringing to regionals,” dance team member Alexis Diaz-Albertini said.

They used the Cheer and Dance Showcase as a dress rehearsal ahead of the teams’ regional qualifier next weekend. Both teams last year came up shy of qualifying for nationals in their inaugural year as a varsity sport.

The teams traveled to Michigan and Illinois for competitions earlier this season. Outside of competitions, the teams also attended home men’s and women’s basketball games at CCAC Allegheny.

“The gratification of a good performance in front of your closest family and friends means so much more than in front of strangers, so they’ve been working this whole year basically for this showcase, not even so much to compete,” head coach Bettina Herold said. “This is what means the most to them, so it means the most to me.”

“Seeing it grow from a club sport to an athletic organization has been amazing,” Mole said. “You see the growth, and you see the dedication…we’re recognized as athletes, and having that recognition really means a lot to all of the girls. We really work hard so we can prove that we deserve to be called a sport here.”

Mole expressed her favorite memories included bonding with the team, tie-dying shirts to represent her family and the pep rally.

The seniors were accompanied by friends and family as Herold announced their future plans and presented them with gifts.

“Our seniors definitely built our program from the ground up, so it will definitely be sad to see them leave,” Diaz-Albertini said. “But we’re going to have a great legacy once they leave.”

Dance teammate Kimberly Keagy agreed the seniors influenced the underclassmen of the team.

Herold took a moment to thank the athletes for their help and commitment.

The teams also honored 14-year-old Jamie Guttenberg, one of the victims of the Parkland High School shooting last week in Florida. Members of both teams donned an orange ribbon on their uniforms and dedicated their routines to Guttenberg, a dancer from the Dance Theatre dance studio in Parkland, Fla.

Both teams will compete at the National Association of Intercollegiate Athletics (NAIA) Northwest Regional Group Tournament this Friday in Sioux City, Iowa. If they qualify for nationals at the tournament, they will then travel to Oklahoma City, Okla. for the NAIA National Championship.

“At this point in the season, we’ve all been around each other for a long time, so you can tell we’re all pushing through because we want the same goal; we want to make it to nationals,” Mole said. “It’s bittersweet just knowing that it’s about to end, but at the same time, it feels like an accomplishment. I know I’m moving on to something else in life, and I have teammates who are just as dedicated and will carry it on.”