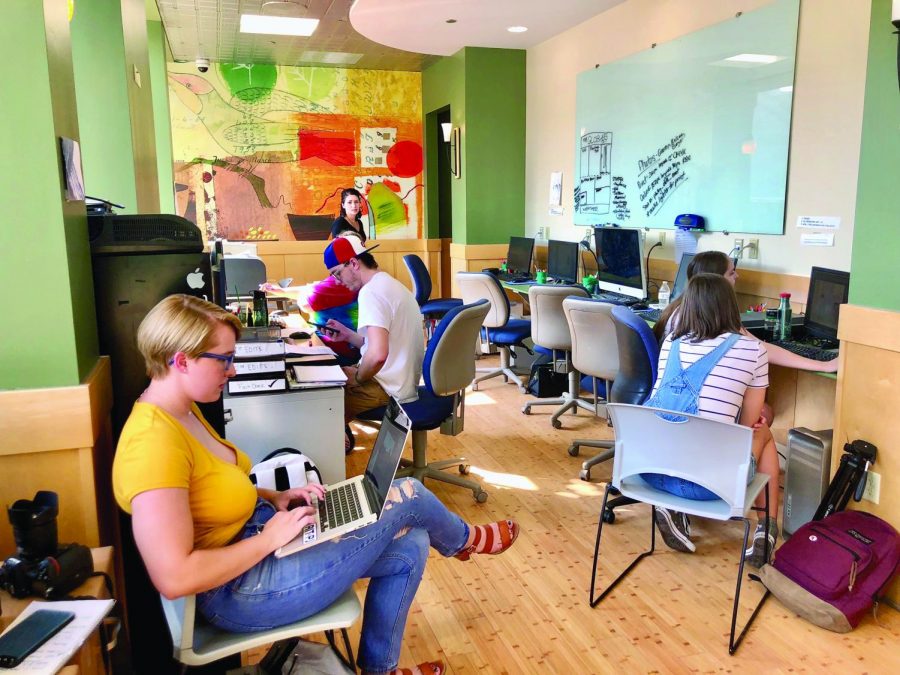 The Globe staff settles into its contemporary newsroom. The new offices, combined with the WPPJ studios, represent a new era for Point Park media.

Originally residing on the 7th and second floors of Lawrence Hall, both spaces have been relocated to the corner of Wood Street and Fort Pitt Boulevard.

Located directly across from the West Penn Building, the offices feature a large meeting and collaborative space for layout and copy editing, accompanied by a separate administrative office for The Globe’s Editor-in-Chief and Editor-Elect. There are two studios for WPPJ’s use – designed for a production room and an on-air studio, as well as a separate office for the station director.

With the addition of the newest coffee shop on campus, Point Perk, the former Starbucks location remained vacant, making the space empty for more than one whole academic year.

Dean of Students Keith Paylo said that alongside Chris Hill, Vice President of Operations, both administrators were “discussing ways to have the student media of the university, Globe and WPPJ, [gain] more exposure to the university community.”

Paylo expressed the new location would attract students to both media outlets.

“The location was ideal to give student media more visibility in order to attract more student interaction and interest in both WPPJ and The Globe,” Paylo said.

Paylo foresees that the old student media spaces will be transformed into office space for faculty processes as well as administrative purposes.

The Globe’s former layout room has already undergone a transformation.

The now-former Globe offices housed dozens of editors and assisted in the production of thousands of editions of newspapers.

Spring 2015-Spring 2016 editor Kristin Snapp was the very first Editor-in-Chief to serve an entire year as opposed to a single semester. When she began writing for The Globe, production was located in a room with no windows or air conditioning.

“The old Globe offices in Lawrence Hall were hot, stuffy and cramped, but full of some of my fondest college memories…some nights we would be there until 1-2 a.m. and we would just get downright delirious,” Snapp said.

Snapp initiated the move from the windowless offices to the newer spaces, complete with windows and therefore, window units.

“I remember going back and forth with the staff, ‘Okay, you guys — this is a smaller location, but we can have crisp, cold air…what’s it gonna be?’ We decided on the air conditioning,” Snapp said. “When we eventually made the move, Dean Paylo stopped in to see our new digs before the semester started. The first thing he pointed out was our old drip coffee pot and immediately fired off an email to have a Keurig ordered for us.”

While Snapp expressed that her memories in the newer office are bottomless, her most memorable experience took place after her
graduation.

On the weekend of her three-year anniversary with her boyfriend, Jon Andreassi – who happens to be another past Globe Editor-in-Chief – she received a text from the then-current Editor Alex Popichak.

Popichak invited her to a Saturday night panel in the “original” newsroom. Although she was skeptical, she decided to attend – only to realize “this was no panel at all.”

“Jon had my best friends decorate the newsroom…with lace, roses and candles to propose to me,” Snapp said. “I never thought that room could be decorated in any sort of romantic manner, but with the help of some very dear friends, he nailed it.”

While she has reason to be nostalgic, Snapp sees the new move as delayed.

“I think it’s long overdue,” Snapp said. “I remember my first time going to The Globe when I was a freshman and being totally lost. The seventh floor of Lawrence is a little bit of a maze right when you get off the elevator, and I think that probably cost the Globe some potential writers.”

Croup was on staff at the Globe for all eight semesters he attended Point Park, and became editor for the 2016 calendar year, and refers to the seventh floor of Lawrence Hall as a “second home on campus during my four years at Point Park, complete with a dysfunctional family, fights over the last slice of pizza and lessons learned that shaped me as a person.”

Of all the memories that stick out most, Croup views the Globe’s 2016 election night coverage as “one of the wildest nights in those offices.”

After completing five and a half hours of broadcasting, the staff gathered in the newsroom to put together the election issue, while still unsure of the winner. The coverage went into the early hours of the morning.

“I’ll never forget the moment in the newsroom when we sat in silence and watched Donald Trump give his victory speech,” Croup said. “There are certain moments in life when time moves slower and you realize the significance of an event in the moment. That was one of those times.”

“In talking with past editors and staffers, it’s evident what this place means to everyone – it’s their haven, their chaos and their beloved clubhouse,” Popichak said. “We accomplished a lot in those spaces…”

Popichak believes any endeavor that increases the transparency of Point Park journalism is a step in the right direction.

“By having a more accessible and naturally-lit space, The Globe is making strides toward boosting morale, increasing the visibility of our main news outlet and collaborating more openly between sections and between student media,” Popichak said.

Being the current station manager at WPPJ, Popichak gets a chance to transition into the new shared student media space – something he looks at with anticipation.

“I couldn’t be more excited to collaborate between the two organizations,” Popichak said. “I also truly believe my time at The Globe has made me not only a better journalist, but a better manager and better person.”