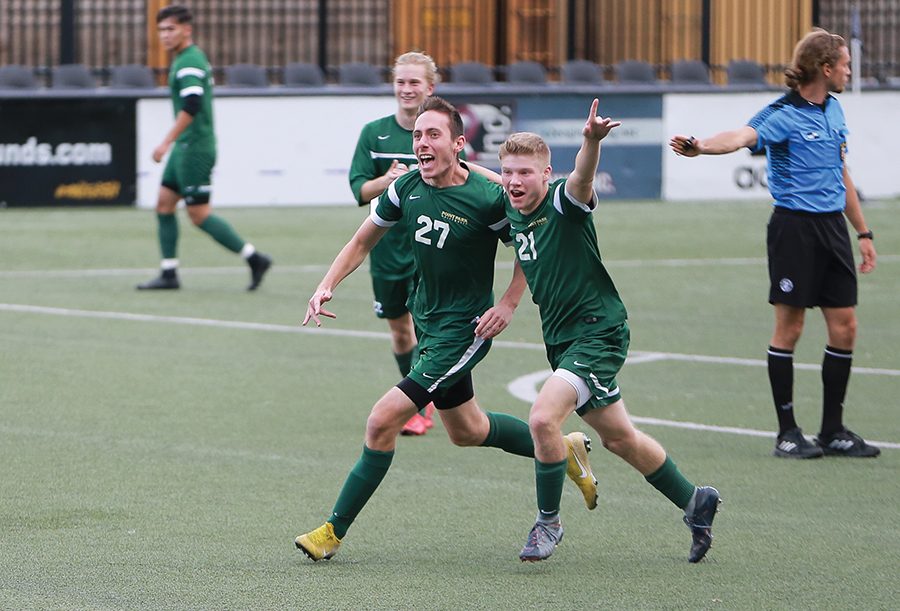 The men’s soccer team is currently seeded fourth in the River States Conference (RSC), sandwiched between Asbury University in third and Midway University in fifth. The Pioneers topped both teams last week as they fight for their spot in playoffs.

Point Park opened Highmark Stadium’s gates to Midway last Thursday, and neither team appeared on the scoreboard in the first half.

Sophomore midfielder Geert Bijl opened scoring in the 48th minute, not even three minutes after the start of the second half.

Point Park kept its modest lead until the 76th minute when sophomore defender Jonathan Roos found the net with the help of sophomore midfielder Kay In’t Ven and sophomore forward Mitchell Roell. Roos then assisted freshman forward Abel van Beest just over a minute later to notch another goal for the green and gold.

The Eagles found the net in the 88th minute, but the comeback was short-lived as the Pioneers closed out the win 3-1. 13 of the Pioneers’ 18 shots came in the second half, while the Eagles only had 13 shots for the entire game. Senior goalkeeper Ryan Daniels tallied 11 saves.

Thursday ended in a win, but the real victory came for the Pioneers after a last-minute overtime goal over the Asbury Eagles on Saturday.

During regulation, Point Park had 18 shots, 11 of which were on goal compared to Asbury’s 13 shots, 5 on goal. 90 scoreless minutes passed before the teams returned to the field for the first extra period.

Junior midfielder Tadeo D’Apollo passed the ball to Roell who centered the ball for freshman midfielder Christopher Ciucanu. Ciucanu stepped up to score the game-winning goal just over four minutes after the start of overtime play.

Point Park will play one more RSC match this Thursday at Indiana University East and close out the regular season on home turf against non-conference Washington Adventist on Halloween.