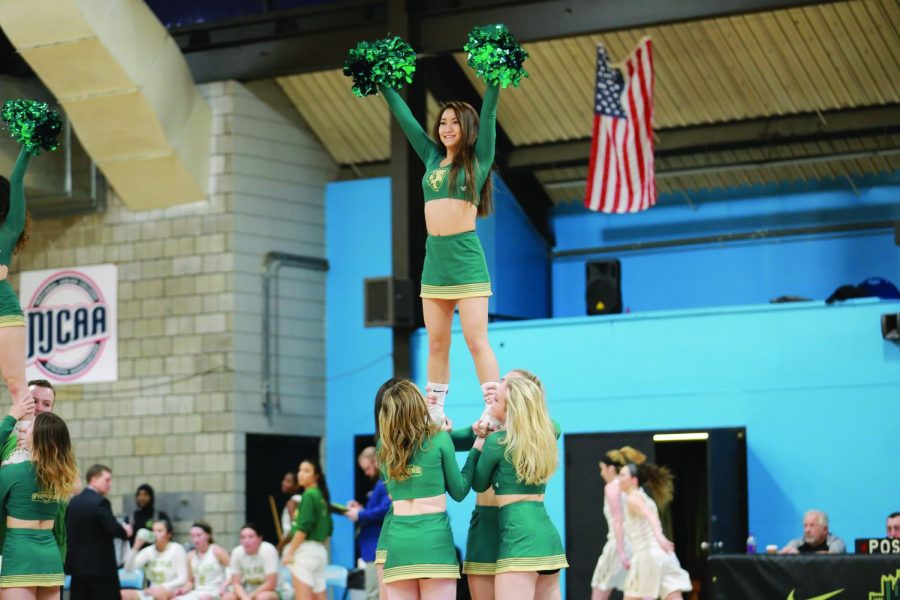 Members of the Competitive Cheer team perform during a home basketball game earlier this season at the CCAC Allegheny Campus Gym.

The Pioneers danced to a second-place finish at the National Association of Intercollegiate Athletics (NAIA) Northeast Regional Qualifier on Feb. 23.

Point Park finished runner-up to St. Ambrose (Iowa) out of eight teams at the regional competition. The Pioneers scored 87.41 in the preliminary round and improved to 88.91 in the final showing, averaging a score of 88.54 to secure their second-place finish.

The weekend ahead of Spring Break proved even more exciting for the team as it was announced Point Park would be returning to the national contest for the second year in a row.

The NAIA announced Point Park received an at-large bid to the NAIA National Championship this upcoming weekend. This means that Point Park’s overall score was among the top eight teams with the highest scores from the regional competition without an automatic bid.

The top four regional champions received automatic bids to the national contest, and Point Park missed the Northeast crown by roughly three points. St. Ambrose earned the automatic bid with a score of 91.71 and will compete against the Pioneers again this weekend.

To add to the good news, on Feb. 26, the NAIA announced seven women from Point Park’s competitive dance team earned All-American honors. The Pioneers were the fourth most successful team with All-American accolades following St. Ambrose, Oklahoma City and Morningside with eight members each.

Freshman Nicole Kapalko earned a spot on the NAIA All-American team, the lone member of the Pioneers to receive the honor and one of 18 athletes to make the national team.

The individual competitors auditioned for the All-American team at the regional qualifier and the best performers with the most advanced skills and precise technique were considered for the team.

Judges scored the dancers on leaps, triple pirouettes, turn combinations, an audition combination and dance choreography. Each category was scored from one to five.

The competitive cheer team, ranked 18th in NAIA ahead of regionals, also competed at the regional qualifier and placed sixth out of 11 teams in attendance. The Pioneers earned their second-highest score of the season with 79.13 in the finals, but the strong showing could not match up with the equally strong showings from the competition.

The competitive dance team will embark on its final contest of the season this weekend at the NAIA National Championship in Davenport, Iowa on March 8-9. The team achieved its feat of returning to the national contest and now looks ahead to improve its No. 4 national ranking from last season.