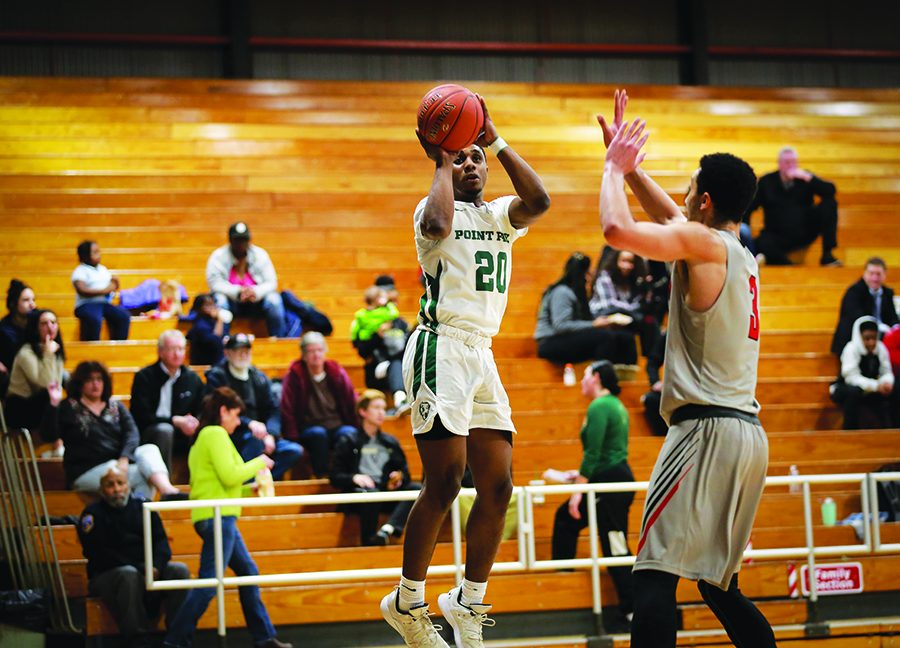 Senior guard Daniel King attempts a jump-shot during the regular season. The men’s basketball team fell to IU Kokomo the Tuesday before spring break began. The team ended the season with an overall record of 9-18.

Undefeated all season at home, IU Kokomo entered the game ranked 25th in the National Association of Intercollegiate Athletics (NAIA) with an overall record of 24-6 and a conference record of 13-5.  On the season, Point Park entered the game 1-0 against the Cougars after defeating them at home 67-66 on Dec. 1.

The Pioneers took a quick lead with sophomore guard Mark Shehady dropping two field goals in a row to get the Pioneers ahead by 4-0 2 minutes into the game.

Point Park added to this after field goals from the hands of Senior guard Asim Pleas and sophomore forward Kyle Carrington tying the game at 14:54.

The momentum however didn’t last long as Kokomo battled back quickly taking a 12-0 run to the 11:29 mark making the score to 20-8.

Carrington managed to end the run after drawing a shooting foul and draining both baskets from the line.

Point Park slowly chipped away at the lead with a 3-pointer from Pleas and a couple two-point baskets form Carrington.

Shehady earned more first half points draining a step-back 2-pointer, followed by another field goal making it a 10 point game of 20-10 at 7:43.

Before the half would end, Carrington was issued a technical foul alongside Antoin Clifton of IU Kokomo. The foul was issued at 7:11 and the Pioneers were only trailing 10 at this point. Carrington would not return after the foul.

IU Kokomo made their advantage of height known throughout the night. Notably in the final minute of the first half as Senior guard Cortez Allen was blocked on a layup under the rim twice and the play was taken down for a quick dunk from IU Kokomo’s Clifton.

IU Kokomo quickly took the lead at the beginning of the second half completing a three-point play to start things off.

McClain continued his hot streak draining his fifth three of the night taking the score to 60-35 at 16:03 causing Point Park to take a timeout.

Kokomo continued their dominance taking the lead to 70-41 at 12:48 and continued to make runs on the Pioneers throughout the half. On the half, Point Park was outscored 51-37.

For Point Park, Plead lead the team in points scored totaling 18 at the end of the night going 7-18 from the field and 2-7 from three-point range. Shehady was a close second to Pleas with 14 points after shooting 6-10 for two points and 2-2 from beyond the arc.

Excluding the playoff loss, the Pioneers ended the season a 9-18 overall record and a 5-12 conference record. An improvement to last season’s record of 4-22 and 1-16 in conference play. It was head coach Joe Lewandowski’s first season who joined the program on Oct 1.