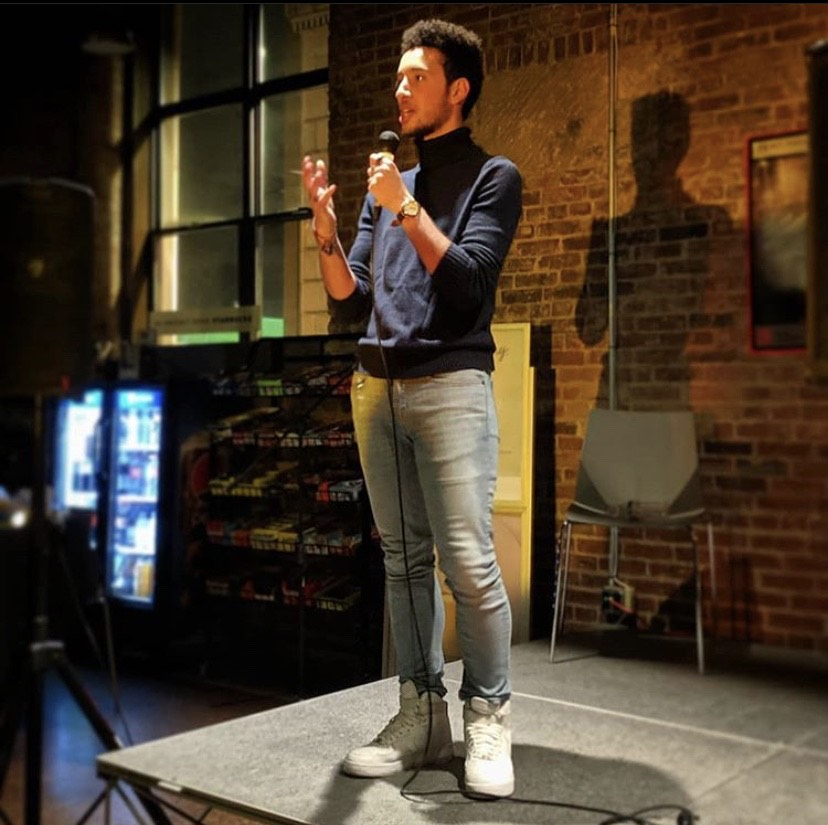 Reed always loved movies and writing, which is why he chose screenwriting as his major. He looks up to writers like Aaron Sorkin and Mel Brooks, who “use comedy to heighten drama in their stories.”

“I’d say a few movies like ‘The Big Chill,’ ‘Do the Right Thing’ and ‘Casablanca’ all impacted me so deeply that I hoped to one day create something that would touch someone the way those movies did me,” Reed said.

In addition to film, he is a fan of comedy, which ties into his studies. According to Reed, a huge part of it all—film and comedy—is writing and becoming an effective storyteller. Some comedians he looks up to include Jim Gaffigan, Ricky Gervais and John Mulaney.

“Their styles of comedy have definitely influenced my own,” Reed said.

This showed in the comedy show, “Comedy Night with Zach and Darnell,” where Reed’s ability to tell a story stood out. Every joke was met with bursts of laughter from the audience.

Reed has been interested in comedy since he was young, when he would watch comedians alongside his parents…sort of.

“I can remember watching stand-up since I was about six, which in retrospect is a little young,” he said. “But my parents always loved it, and I would just happen to sneak downstairs when they were watching Chris Rock, Sarah Silverman or Dave Chappelle.”

He performed standup for the first time in 2018 in a talent show.

“I thought maybe instead of singing or dancing, I could try something I was good at, which was writing,” Reed said. “Then I wondered how I could make writing interesting to watch. I realized that stand-up is basically just reading aloud your thoughts and ideas to a crowd that wants to hear them.”

Having always loved watching and performing stand-up, Reed felt inspired to perform some of his own new material at an open mic night after seeing his friend Johnny Cardo perform at the university. He and Darnell Montgomery both performed there, and both received great reactions from the audience.

“We both performed, and it went very well,” Reed said. “Then Bryana Appley approached us about headlining a comedy night in the same space, and we couldn’t say no.”

From there, Reed and Montgomery started to work on planning the show, which, according to Reed, included a lot of sitting down and writing. He also kept a journal of things to make jokes about at a later time, whether it was funny to him at the time or not.

“I’m not super sure the logistical side of how everything worked out, but I know Bryana started by having a little impromptu photoshoot with Darnell and myself. And then suddenly there were posters and flyers and leaflets of us everywhere,” Reed said. “It all sort of happened at once, but it was very exciting.”

The comedy show is an accomplishment of Reed’s that he is proud of, alongside creating a play and musical that were performed at Duquesne. He’s also won the August Wilson Century Cycle play competition and received offers to perform some more stand-up.

The show was very successful, and he plans to do more.

“I’ve been in the talks with the owner of the Pittsburgh Improv, which is super exciting,” Reed said. “Bryana and I have also been talking about an open mic where Darnell and I could emcee, and other comics could come up and try some material.”

WHAT MAKES YOU A PIONEER:

“Well I think being a pioneer is more than just being a student at Point Park. No matter how cheesy it sounds, it means having a pioneer spirit. You are willing to work hard for what you want to achieve and make improvements to your own life and the lives around you. I think it also means not being afraid of having a dream and of chasing that dream, even if it seems out of reach.”