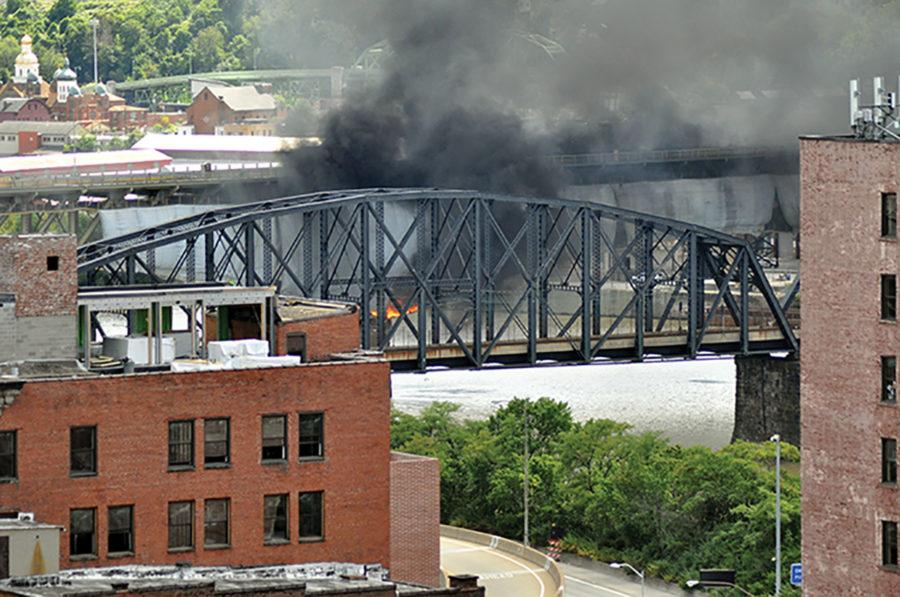 Sparks from renoviation work on the Liberty Bridge ignited a tarp covering a section of the bridge and started a fire that it to close. The bridge was fully closed on a work day for the first time in its 88-year history.

All traffic routes across the Liberty Bridge are closed due to structural damage incurred during a fire that broke out Friday afternoon.

PennDOT officials said the fire, which reached temperatures of more than 1,200 degrees, damaged a 30-foot-long steel beam under the bridge. Wild sparks from construction crews on the bridge ignited plastic piping, which spread to a tarp attached to the bridge, according to PennDOT officials.

The Liberty Bridge is currently under a two-year, $80 million renovation construction project.

All traffic lanes across the bridge will close for at least a week. Police officials are stationed at all entrances for the bridge to direct motorists and assist traffic detours.

Public Schools and 12 other school districts operate don a 2-hour delay Tuesday due to the expected traffic delays.

The Liberty Bridge averages 55,000 vehicles a day across all lanes, leading the Pittsburgh Port Authority to add multiple alternate routes for commuters.

Port Authority has added limited bus and light rail service to its schedules to accommodate the inflow of additional riders. Commuters should expect delays to their normal routes, and the Port Authority advises riders to allow extra time for travel.

Twelve bus routes will be added on lines impacted most by the traffic delays. In addition, Port Authority will operate two extra two-car trains throughout the week.

In a press release distributed Monday, Port Authority reported that PennDOT has offered to pay for the cost of additional service throughout the week.

Commuters can visit the Port Authority website for full details regarding route delays and additions.