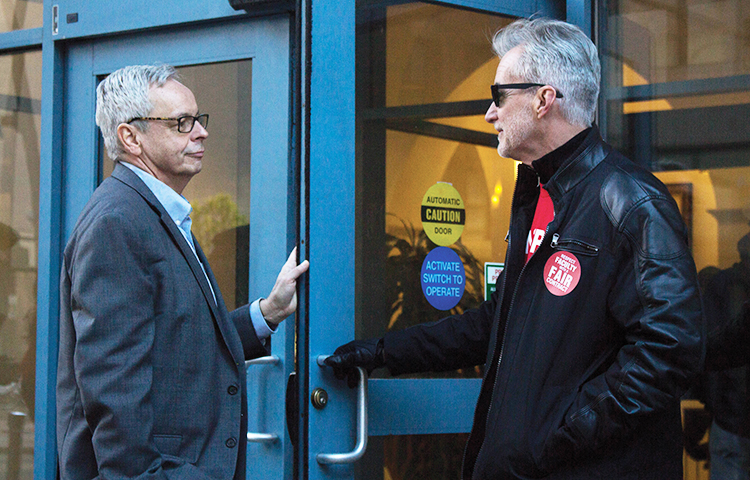 Faculty who showed up to demonstrate Saturday as students and their families arrived to Admitted Students Day said they did so to catch the attention of the administration before the semester ends.

“There’s no hostility,” Professor John Shepard said. “We want to impress upon the administration that they should take us seriously and that we’re committed.”

The first negotiating session between the union representing the full-time faculty at Point Park and the university was on March 17 last year, and negotiations began in earnest in May.

President Hennigan recently told the Globe that first contracts typically take between 18-24 months to negotiate, and talks are progressing on time.

Bill Purcell is one professor negotiating on behalf of the full-time faculty with representatives from the Newspaper Guild of Pittsburgh/Communications Workers of America, the union representing the faculty.

At Saturday’s demonstration, Purcell said first contracts are time consuming, but what has been accomplished so far could have been done faster.

The sides have covered grievance procedures, academic rank, tenure and the academic calendar, among other contract provisions.

“We are now beginning to get into serious discussion about compensation and workload,” Purcell said. “We’re anticipating some difficulties.”

It was the first live demonstration by a unified group of full-time faculty members since discussions began. Faculty have also displayed signs on their doors and worn stickers throughout the year.

There were previous talks among some faculty members of staging a similar demonstration to Saturday’s during the fall move-in period that did not pan out.

Purcell said there would be more mobilization efforts “as needed” in the coming months that depend on the number of faculty members in the area during the summer months.

“The hope is to have a contract by the end of the summer,” Purcell said. “If we don’t, there’s going to be a lot of mobilization.”

Full-time faculty members at Point Park voted in June 2004 to unionize, an effort the university challenged for more than 11 years. Point Park dropped its legal appeals in July 2015 and announced it would begin the collective bargaining process.

The most important topic at the bargaining table for most faculty members is their salary.

That’s the case for photography instructor Ben Schonberger and assistant professor of photography April Friges, who both turned out to greet students with their co-workers at Admitted Students Day.

“It’s a difficult living situation to work here,” Schonberger said. “I can’t afford to live in the community I work in. I can’t do that with my salary.”

Friges, with her red shirt that read “Contract now!” on the front and “Point Park Faculty” on the back, held the door for students and families entering Lawrence Hall Saturday with Rick Hawkins, an artist in residence who teaches screenwriting.

“We are here today to welcome new students and support them 100 percent, not to talk to them at all about the union,” Purcell said. “We are here to demonstrate our strength and solidarity to the administration.”

Purcell said no options are off the table moving forward, including a strike, which he called the “nuclear option.”

“We want to give them a chance to come up with a livable wage,” Purcell said. “We’d like to solve this without a strike. We have a number of things short of a strike that we can continue to do through the summer and into the early part of the fall.”

Faculty at Pennsylvania’s 14 state universities went on strike in October after two years of failing to reach a contract agreement. The strike lasted for three days before a tentative three-year contract was signed.

The university released a statement in August addressing the negotiations.

“At Point Park University, we focus on student learning and student welfare. As we work through the early stages of negotiation on a contract, University leadership will respect that process by confining talks to the bargaining table.”