Tanzilli assumes role as dean of Rowland School of Business 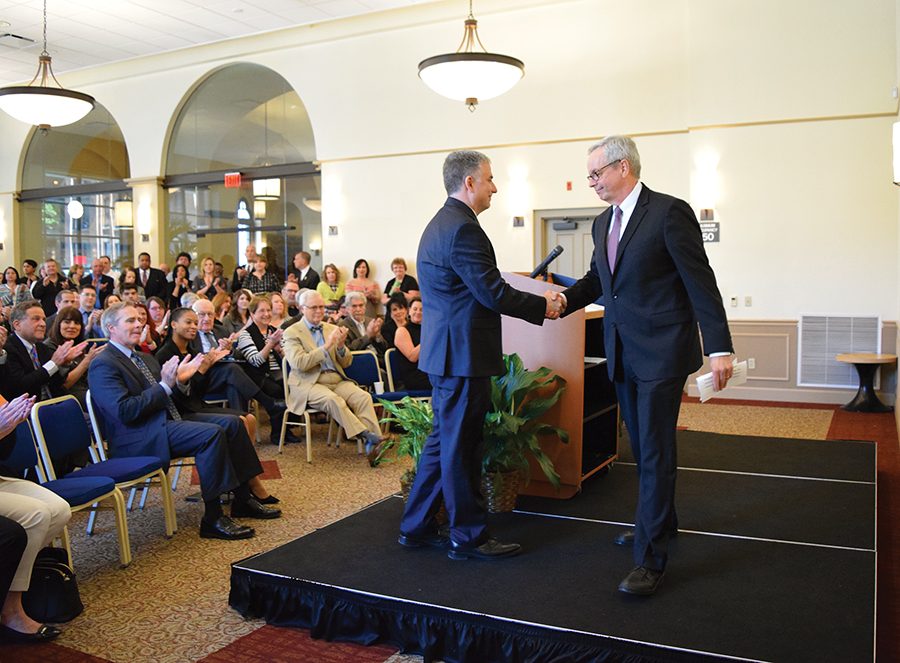 Point Park’s School of Business now has a name and a Dean.

The Rowland School of Business is the first school to be named at Point Park.

“It’s going to be great that we have a name to the school,” Tanzilli said. “The White family, they’ve not just been great contributing members of the Point Park community but also the Pittsburgh Community, so to be able to acknowledge them is terrific.”

The Whites gave the university a bequest of greater than $15 million starting in 2014, the single largest gift in university history. While not originally from Pittsburgh, the Whites adopted Downtown as their home and served as trustees of the university. The school will now be known as the Rowland School of Business.

“Their generous gift, the $5 million endowment to the Rowland School of Business—will help support our continuing efforts to provide innovative, experiential learning opportunities for our business students,” Paul Hennigan, university president, said in a press release. “Indeed, we anticipate that the Rowland School of Business will be a national leader in business education.”

In his role as dean of the Rowland School of Business, Tanzilli will have broad oversight of all academic programs and will head efforts to solidify the school’s connections with the broader business community. He said Tuesday that his goal is to build a “true learning laboratory” within the school.

A management professional, Tanzilli created the Sports, Arts and Entertainment Management major at Point Park 13 years ago out of the need to legitimize the profession.

“I’m trying to bring to the school of business is a lot of that SAEM model, which is based on practical, hands-on experience,” Tanzilli said Monday. “Engaging our students with guest lecturers and guest speakers. I want an internship to be something that all school of business students understand the significance of.”

That hands-on approach, Tanzilli believes, is imperative in building a successful business curriculum.

“We’re the first business school in the region to offer a co-operative education program for all school of business majors,” Tanzilli said. “That’s how important I think experience is in making sure our students are employable. Another thing we’ve done is we’ve re-done our entire curriculum in the School of Business.”

Tanzilli said that while the curriculum change does affect current students, the school has worked to assure that all students will graduate on time.

He said he’s excited to offer a new curriculum to students based primarily on giving experience and matching the needs of businesses in the region.