Users of the video sharing site take advantage of its features 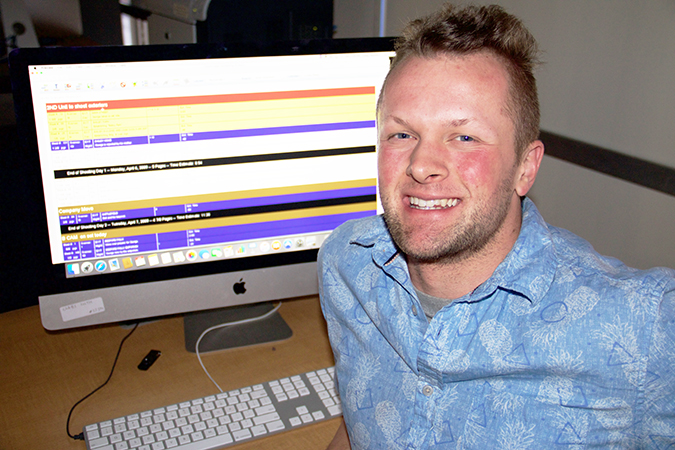 Ian Lewis, senior cinema production major, started his career in high school, with an amateur camera, a couple of puppets and a YouTube account. Now, he works on short films with his classmates as he pushes towards earning a degree in cinema production.

Just like Lewis, YouTube has also been growing. In 2005, YouTube was a small video-sharing website with its headquarters located above a pizzeria and Japanese restaurant in San Mateo, Ca. Today, it is a powerhouse of content, with over 400 hours of video uploaded to its server each minute and one billion hours watched each day.

As the website has grown and changed, so has its usage. It’s not uncommon in 2017 to have someone list their full-time job as a “YouTuber,” or someone who uploads content they created on a schedule and gains revenue based on their subscriber count and advertisements; but how does that resonate with young cinema students looking for a job?

“I would prefer to work for myself, to try and make my living more independently, and be more freelance-based,” said Daymon Long, a junior cinema production major with a concentration in producing. “In terms of video content creators, YouTube is really the place you have to go to do that.”

Students in the cinema department are no strangers to YouTube. Many have channels and some have racked up quite a few views.

Lewis has a subscriber count of 14,000, and clocks his most popular video, the first episode of a series revolving around two characters, Walter and Zilla, has four million views.

“I don’t know why I thought it was funny five years ago,” Lewis said in reference to the video. “It was just a different mindset.”

Lewis sees the video, uploaded in October 2011, as evidence of growth in how he created content compared to now, after having four years of classes involving screenwriting and directing.

“I’m trying to go for smarter humor or just humor tied to the characters, but those old videos are really cringey to me,” Lewis said. “It’s probably because I can see how much I’ve learned, being here.”

Many of the students also use Vimeo, another video sharing website, for their more professional content, including short films and reels, but agree that between the two websites, YouTube is the place to go to get more views.

“[YouTube] is a good place to get your work out there, but if you’re looking for work, I would not send a
YouTube link to any prospective business associates,” junior cinema production major Connor Kaye said.

Kaye, Lewis and Long all expressed interest in trying to upload more consistent content for a variety of reasons: refined skills, renewed passion, a hunger to be seen and, more importantly, more time.

“Seeing how [YouTube] has affected certain people on YouTube’s lives, and how they’ve been able to make a living creating content that they enjoy and that other people enjoy definitely pushes me to think about, ‘What can I do differently? What can I create?’ that would be successful on this platform,” Long said. “This summer, especially, I would like to pursue that more because it will probably be the most amount of time I’ll have on my hands ever again.”

On Thursday, YouTube decided to close its partner program to only allow channels with 10,000 lifetime views to turn monetization on. The restriction to the partnership, which has been open to the public in 2012, comes in light of channels frequently using it to re-upload copyrighted content.

For Lewis, who is set to graduate at the end of the month, YouTube as a long-term job and source of income isn’t a something he’s completely against, but it’s “definitely more of a plan G.” While he feels there’s more potential for his show, more help would definitely be required.

“It can be bigger than it is, but not so crazy that a large company could come in and ruin it,” Lewis said.

Many YouTube “stars” who have had success in the past have been offered shows and movies on network television based on the content on their channel. In 2009, the first YouTuber to reach over one million subscribers was Lucas Cruikshank, whose popular “Fred” videos became a staple of the online community and launched him into being the most subscribed channel at the time. Promptly following this success, Nickelodeon offered Cruikshank a movie deal and found that success on the internet does not necessarily equal success on television. The film received a zero percent rating on Rotten Tomatoes, with an average of 2.5/5 stars.

Every student wants their work to be seen and liked by people, and while YouTube success is highly appealing and potentially rewarding, for some young, aspiring cinema majors, with it comes uncertainty.

“Can I use YouTube to make a living, or at least feed myself for a little while?” Lewis said. “Maybe. It depends on what the job situation is looking like within the next 20 days.”