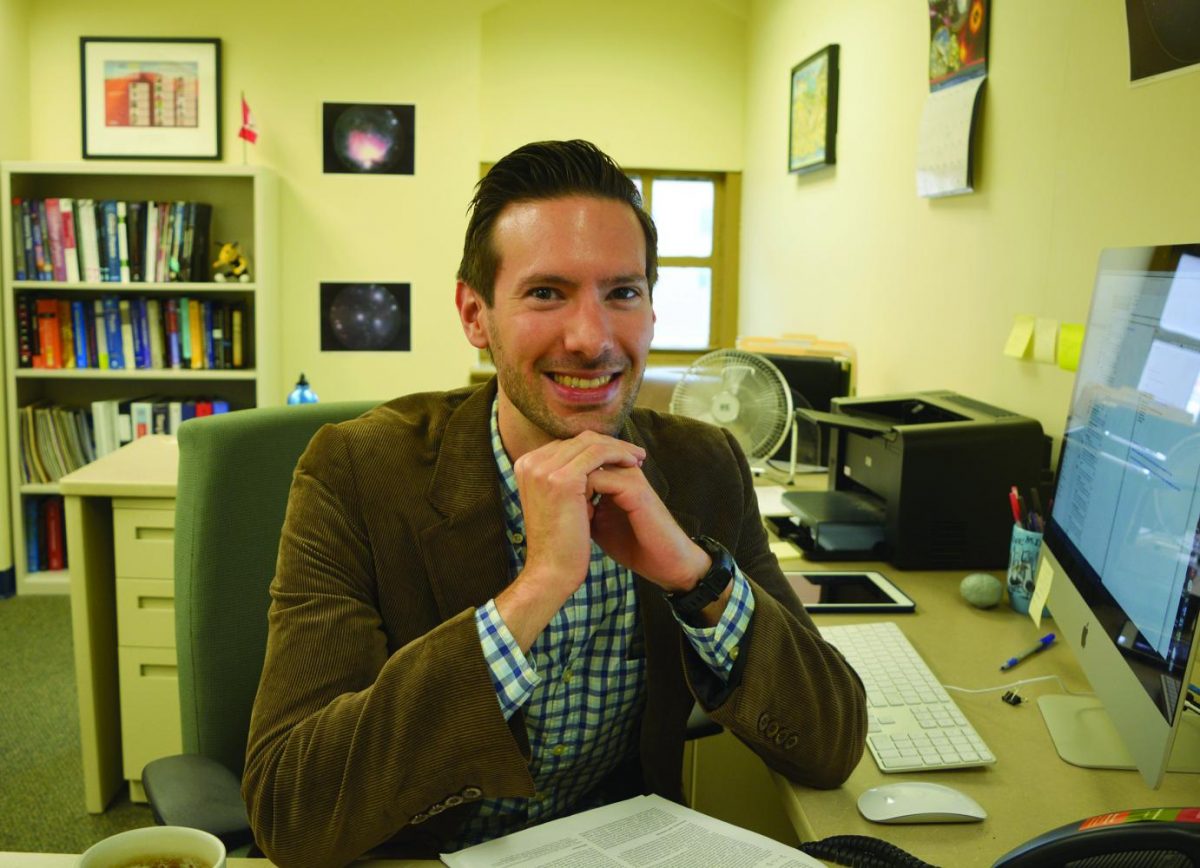 Brendan Mullan sits in his office in the Honors department in Lawrence Hall.

The role of Assistant Director for the Honors program was successfully brought back over the summer by Helen Fallon. This position had been terminated in the past due to budget cuts, leaving all the administrative work on Fallon, the director of the program.

“I’ve always needed the position back,” Fallon said. “We have 230 students in the program, so we have a lot of students to manage. We have to make sure all systems are operating and it has been tough since the position was terminated.”

Brendan Mullan, an astrophysicist and professor on campus who teaches science and math courses, assumed the role, assuring that Fallon no longer had to manage the program by herself.

“He’s taken over a large part of the responsibilities with Honors and now we can stay more on top of things and that benefits everyone,” said Fallon.

Throughout his career, Mullan has worked on science education and communication.

“The work I’ve done with National Geographic involved traveling and working on effective science communications strategies to show kids how to get involved,” Mullan said. “I came to Point Park because I wanted to come back to academia.”

Mullan was drawn to the Honors community after working as the Planetary Director at the Carnegie Science Center.

“I was wondering what my options would be and this job was the next subway stop down from the science center, so it was fate, I suppose,” Mullan said.

Mullan began his career at Point Park in 2015.

“This school has a unique, vibrant campus in the heart of downtown,” Mullan said. “There was something about the energy that it had that drew me in.”

His first role was the faculty advisor for the Alpha Chi Honors Society which led him to Helen Fallon.

“I’ve had a lot to be thankful for in terms of working for Helen because she’s produced a well-oiled organization and with administrative support,” Mullan said. “I am very optimistic about the future of the program.”

“He has a strong interest in helping students,” Fallon said. “He really has an affinity for students who want to achieve more.”

Brannon Dixon, a senior forensic science major, was a student of Mullan’s last spring and fall.

“He is an eccentric individual who is incredibly enthusiastic and passionate about teaching,” Dixon said. “It’s always nice to see a teacher that cares so much about helping students understand the subject matter.”

Since Mullan has filled the role, graduate assistants for the program like Tyler Dague have seen a change in the operation of the program.

“Ever since he’s joined, he’s done a lot to alleviate some of the administrative pressure that fell on the director, and has allowed us as a department to focus on something more long-term to benefit students in the future,” Dague said.

Mullan has been working on developing a plan for the program’s long term trajectory.

“One of Brendan’s big projects has been a strategic vision of where we want to be in five years as a program,” Fallon said. “This plan includes a possibility of turning Point Park into an honors college, which would require resources and to be recognized.”

“Short-term, we’re attaching one credit to capstone which everyone takes in honors and that is designed to help turn capstone into an interdisciplinary experience,” Mullan said. “Long-term we want to build a substantial system of seminars of students working together on dense interdisciplinary problems to reflect how the real world works as in the case of starting up businesses.”

Mullan highlights the significance of using creativity and knowledge to mold students into successful adults by outlining a plan for cross-disciplinary studies.

“Science certainly requires knowledge, but in order to use that knowledge, you have to use your imagination and exercise your creative skills to imagine creative solutions to problems,” Mullan said. “Knowledge is the kindling but creativity is the spark.”

Together, Fallon and Mullan are working towards a bright future for the Honors program.

“If Helen is the nurturing mama bear, I’m the cold, distant uncle,” Mullan joked. “I’m plotting out the long-term vision and trajectory for the program and Helen keeps the trains running on time.”