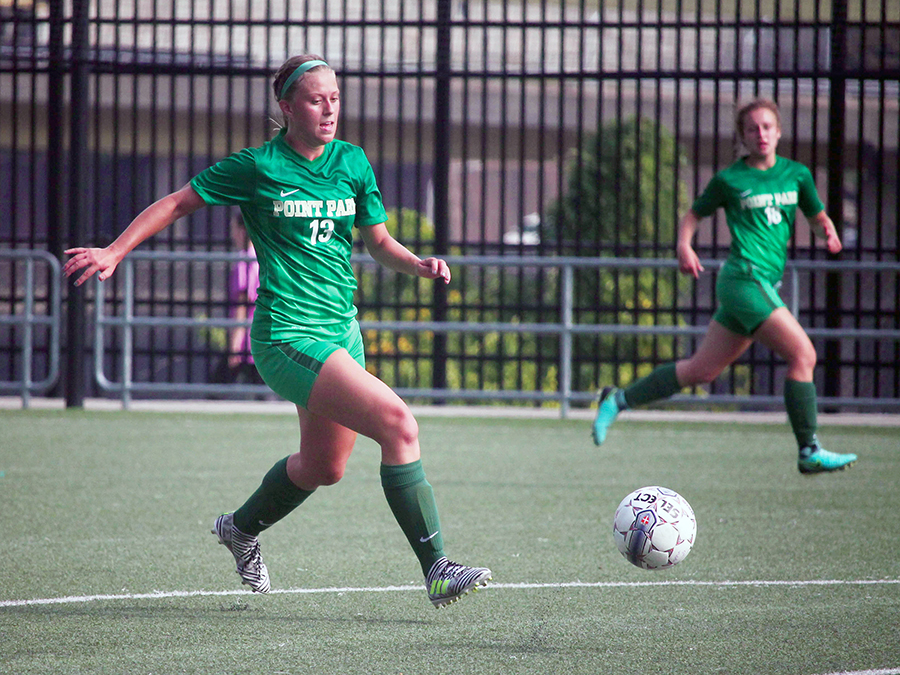 Freshman midfielder, Bailey Boyd, advances the ball up the field during a game against the University of Pikeville on Sept. 16. The Pioneers won 5-0.

The women’s soccer team went 2-1 in its last week of games before beginning conference play.

Both of the Pioneers’ wins came in the form of 4-0 shutouts, first at Washington Adventist, then at Villa Maria.

Senior midfielder Noel Hartle had a lot to contribute to both wins, scoring three goals over the span of the week.

“It was an awesome feeling,” Hartle said. “I really needed to score, so the fact that I got that first one under my belt helped, then lead to the next goal later in the game, and then to the goal the game after that. The same thing goes with the team – once you score once, the rest come.”

Both veterans and new faces alike added to the Pioneers’ early success.

Freshman midfielder Bailey Boyd closed scoring against Washington Adventist in the 67th minute, as well as opened scoring up for the team against Villa Maria in the 25th minute off an assist from Katy Melhuish.

“I was very excited,” Boyd said. “It was more like I didn’t take it in until after the game was over. I couldn’t believe it.”

Sophomore goalkeeper Ashtyn Webb was back in net at Washington Adventist, recording her second shutout of the regular season and her career with five saves.

“[Webb] has been a huge asset,” Hartle said. “I would definitely say this year more than any other, we pass back to our keeper because we trust her so much. Her character, how she talks on the field, her mindset, how she knows the game of soccer – she’s been very vital to our success.”

The Pioneers’ only loss came on Saturday at Geneva College 1-0.

“[Geneva’s] keeper made a few great saves to keep us off the board,” head coach Maggie Kuhn said. “Then they got a goal because they outworked us. It is a little bit deflating, but we were also coming off a high travel week. We were in D.C., then Buffalo on Saturday, just to come back and play Geneva, so I’m sure that everyone was exhausted.”

Their play at Geneva allowed for lessons to be learned before heading into conference play.

“We have been doing a decent job of creating chances in front of our opponent’s net,” Kuhn said. “Now we have to do a better job of executing in front of the goal and as a whole defensively.

The next game for Point Park is another road game, but this time, it’s River States Conference (RSC) play. The team will head to Asbury University on Thursday, Sept. 28 for their first conference game of the season.

“[Asbury] always plays us rather tough,” Kuhn said. “It is going to be a huge game for us, whether it be at home or on the road, and we just have to dig deep and find a way to win.”

In preparation for conference play, the team has been training harder and pushing themselves to improve as a whole.

“We’ve definitely been focusing more on patterns, shooting and finishing, as well as our physical shape,” Hartle said. “I would say practice has been stepped up two or three notches for sure.”

After the Asbury contest, Point Park remains on the road for another conference match-up against Cincinnati Christian University two days later before returning home to face Midway University the following weekend.