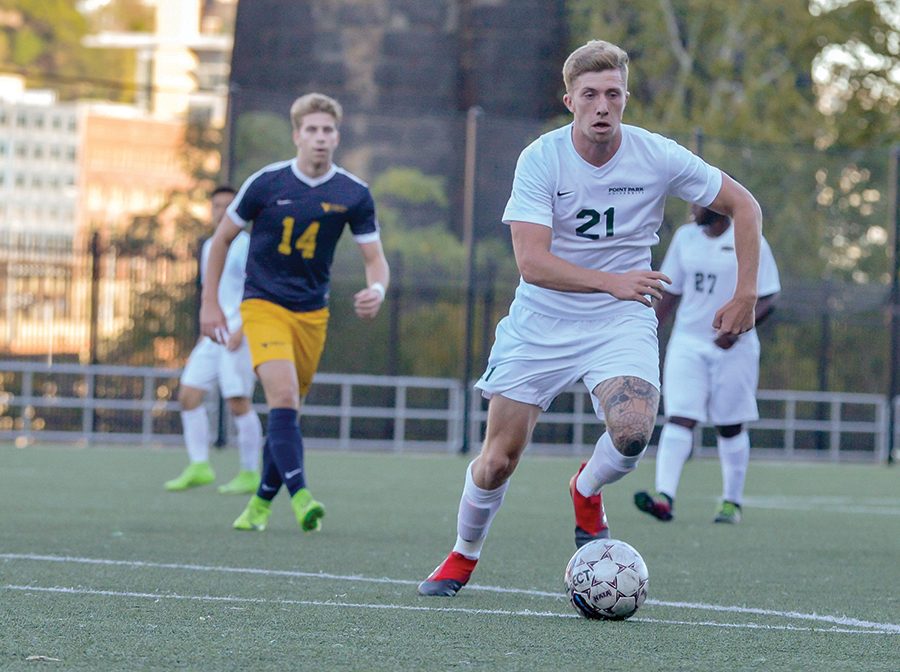 Senior defender Josh Williams races to keep the ball out of Point Park’s zone during Friday’s contest against West Virginia Tech. The Pioneers held a five-game winning streak before dropping the game 2-3 to the Golden Bears.

The men’s soccer team dropped two tough 3-2 finals against two of the top teams in the River States Conference (RSC) last weekend, ending its five-game winning streak and dropping the club to fourth in the conference standings.

The anticipated home weekend began against West Virginia Tech on Friday night at Highmark Stadium and concluded an overtime thriller against the No. 3 team in the National Association of Intercollegiate Athletics (NAIA), the Rio Grande RedStorm.

After scoring the game’s first two goals early Friday against West Virginia Tech, the Pioneers allowed three unanswered tallies against the Golden Bears to drop the 3-2 decision. The Pioneers’ winning streak was snapped as they entered the weekend winners of 10 of their last 11 games.

Alan Ramos scored both goals for Point Park, bringing his season total to 12. Ramos scored his first of the day 2:30 into the game off a well-timed pass from Roberto Whitley through the defense.

Ramos capitalized on a penalty kick nine minutes into the game to give Point Park an early 2-0 advantage.

The Golden Bears tallied their first goal of the game in the 29th minute to cut their deficit in half heading into halftime.

West Virginia Tech’s Manuel Garcia and Cameron Glennon scored within seven minutes of each other early in the second half to finish the day’s scoring.

The Golden Bears held a clear shot advantage, out-shooting the Pioneers 22-9 and 14-4 in shots on goal.

The bigger test of the weekend came Sunday against the nation’s No. 3 team and defending national tournament runner-up.

Point Park was confident heading into the weekend’s conclusion.

“After the game against WVU (Tech), we knew we could do damage to Rio or anyone else in the country,” Ramos said.

Roberto Whitley took a penalty kick five minutes into the game, but missed the net on the team’s first real chance of the game.

Rio Grande’s Harry Reilly got one past goalkeeper Juan Somoza to give the RedStorm a 1-0 lead in the 26th minute. Rio Grande took the short lead into halftime.

Fifteen minutes into the second half, Ramos scored the equalizer on a pass from Wessel Rietveld.

Five minutes later, Jorge Guinovart scored the go-ahead goal from 25 yards out to put Rio Grande on top. It was the first goal of the season for last year’s RSC Male Athlete of the Year, who was in his fourth game of the season.

With less than 10 minutes to go, a handball was called on the Rio Grande defense, giving Whitley another penalty kick and a chance to tie the game.

The Pioneers tied the game and forced overtime with the odds stacked against them. Rio Grande hasn’t allowed three goals since the RedStorm were upset 3-2 in the 2014 NAIA National Tournament Second Round.

Their streak continued Sunday. The RedStorm’s Omar Walcott fed a shot through the legs of Somoza in the seventh minute of overtime to lift Rio Grande over Point Park.

The Pioneers had a chance early in the overtime period when Ramos sent a header wide of the net.

“We should have won,” head coach Jeroen Walstra said. “It was on Ramos’s head right there.”

Point Park had three shots in overtime and 13 on the game, opposed to Rio Grande’s 23 total shots.

“We just really wanted it,” captain Ricardo Dip said. “I think we wanted it more than them. It’s so unlucky, though.”

The Pioneers fell to 5-3 in RSC play and enter the final conference home game against Carlow Saturday in fourth place. The top six of the 10 teams make the conference tournament, with the third and fourth seeds hosting the quarterfinal match-up.

“We improve as each game goes by,” Ramos said. “I’m really proud of my teammates. We’re going to keep going strong against any team. We can beat any team and we know that.”