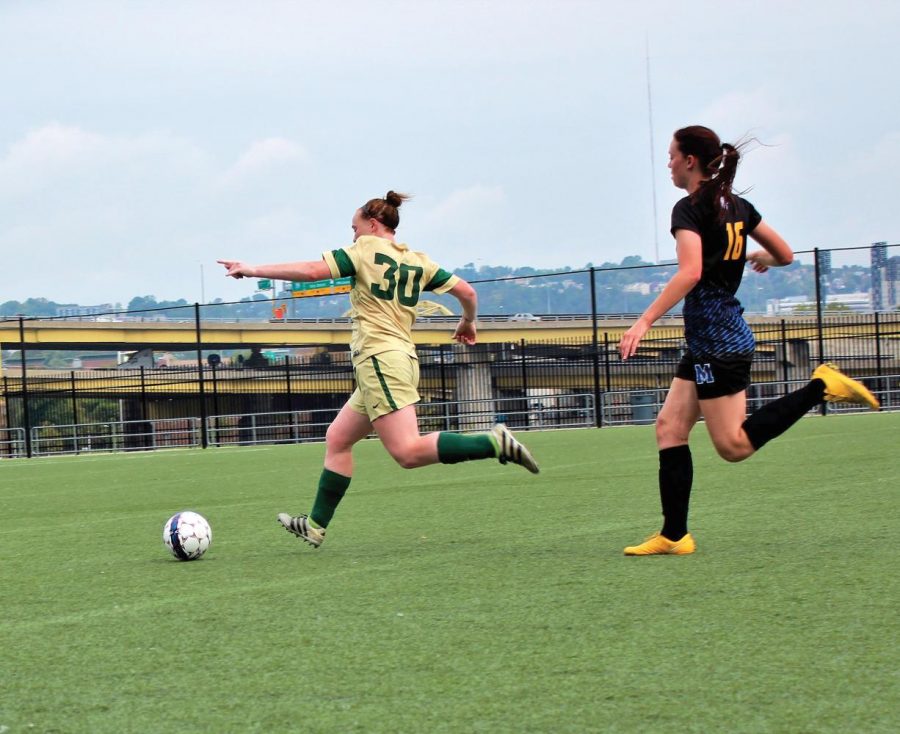 Doreen Clark, sophomore midfielder, leads the ball towards the goal in Friday’s match against Midway University. The Pioneers won 1-0.

The first came on Friday against Midway with a 1-0 victory.

Even with the one-goal margin, the Pioneers outshot the Eagles 21-2, with nearly a third of those coming from senior midfielder Izzy Hunter.

By the end of the first half, neither team had tallied a point, sending both teams to the locker room empty-handed.

It was not until the 65th minute that the Pioneers recorded the only goal of the game. Junior midfielder Lauren Bower got one past the Eagles’ goalkeeper off a pass from Gabby Widman.

The Pioneers were successful at keeping the ball on Midway’s side of the field, and sophomore starting goalkeeper Ashtyn Webb only had to make one save to give her another shutout.

The second victory of the weekend came Sunday afternoon against Brescia 7-0.

The Pioneers were again successful at keeping the net on the opponent’s side, outshooting the Bearcats 35-0.

Point Park made their statement in the first half, sending the Bearcats to the locker room down 0-4.

“I actually wasn’t too happy with how we played in the first half, despite what the score was,” head coach Maggie Kuhn said after the game. “We talked [at halftime] about possessing a little bit better in the final third, as well as creating some better opportunities.”

Leading the scoring for the Pioneers were Hunter and Widman, with two goals and an assist each. Seniors Bella Wilson and Audra Lewis and freshman Morgan French also all added a goal a piece.

“It was pretty disappointing on Friday; I couldn’t hit net to save my life,” Hunter said. “This game paid off a lot better. Seven-nil, I can’t complain.”

Despite the early success the team has had in conference play so far, Kuhn believes there is always something to work on.

This weekend marked only the second and third home games the women’s team has seen all season, highlighting a travel-heavy first half schedule.

Point Park’s only home game before last weekend came on Sept. 16 against Pikeville College. All three home games this far have resulted in shutouts in the Pioneer’s favor.

“I think we play a lot better when we’re at home, personally,” Hunter said. “We have our home crowd, and we practice on this field. We have the city in the background, and to me, this is the best stadium that I’ve played at. I think it just pumps us up and gets us ready for the game.”

The women are back on the road next weekend for more conference play with an evening game at Indiana University East on Thursday and an afternoon game at Ohio Christian University on Saturday.