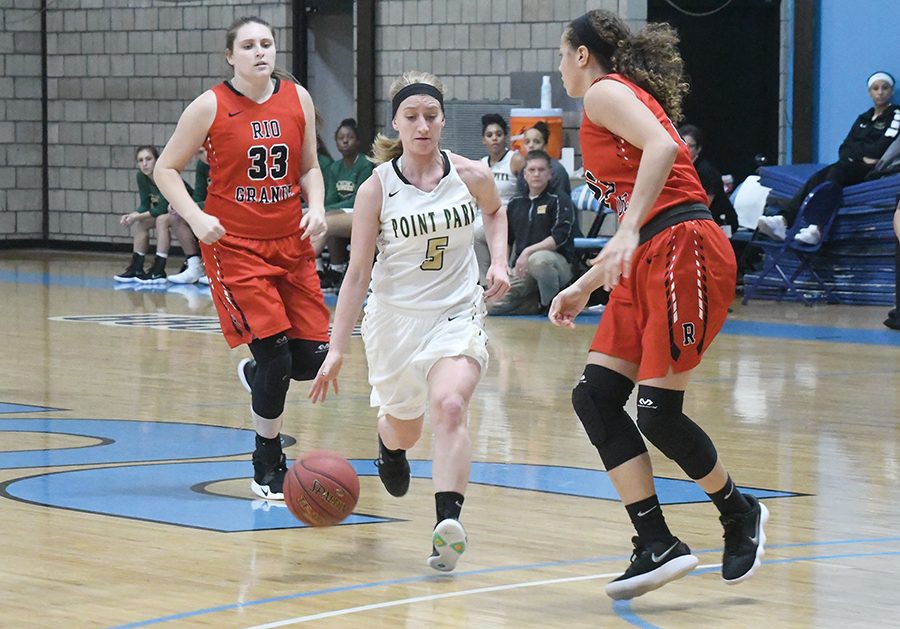 The first RSC game was against Rio Grande last Wednesday. This was the first conference game that Point Park played in their new home, the Community College of Allegheny County (CCAC) – Allegheny campus gym.

The game ultimately came down to a jump shot by the RedStorm’s Jimi Howell in the final seconds, handing them the 77-75 victory.

Point Park was down 44-32 at the half, but gained momentum early on in the third quarter.

“Right now, we just need to connect and start off stronger,” freshman guard Michelle Burns said. “I think once we start connecting as a team and get going together, we will start winning some games.”

Burns contributed a big 3-pointer with 1 minutes, 52 seconds remaining to put Point Park back up 71-70.

Burns continued to make big shots with 28 seconds remaining, when she made both ends of a 1-and-1 free throw to tie the game at 75.

Howell made her game-winning shot with only eight seconds left.

Point Park was able to put up some big numbers in the back and forth game. Weir had a season-high double-double with 21 points and 17 rebounds.

“I was really getting down on myself,” Weir said. “I was thinking that maybe I just didn’t have it anymore. I just need to focus on what I do best as a player and play my role.”

Maryssa Agurs contributed 18 points, 15 of which came in the second half. Burns had 20 points on the night, 13 coming from free throws.

Another close game came on Saturday against the West Virginia Tech Golden Bears.

The Pioneers found themselves down again midway through the third quarter 54-45, but battled back in the fourth to keep it a one-possession game for a majority of the final minutes.

The Point Park player of the game, Baylie Mook, made a trey with 2 minutes, 56 seconds left in the game to gain the lead back at 78-76. Her shot was the final made field goal of the game by the Pioneers.

The Golden Bears ended the game with their final ten points coming from the free throw line and ultimately handing them the win, 85-79.

“I think we’re making way too many mental errors,” head coach Tony Grenek said. “We are missing rebounds off of the other team’s foul shots, just everything. It’s frustrating. We’re making too many turnovers, too many mistakes.”

The Point Park bench made its share of contributions with 41 total points, led by the 14 points apiece from Mook and Nikki Corcoran. Agurs again came up big in the second half, with ten of her 12 points coming in the third quarter.

Leading the scoring for the Pioneers was Weir, who tallied 16 points on the night. Tyra James also contributed 15 points of her own, 12 of which came in the form of treys.

After hosting Carlow Tuesday night, the Pioneers head to Indiana University-Kokomo on Saturday for the first road conference game of the season and do not return home until Dec. 18 against the University of the Cumberlands.