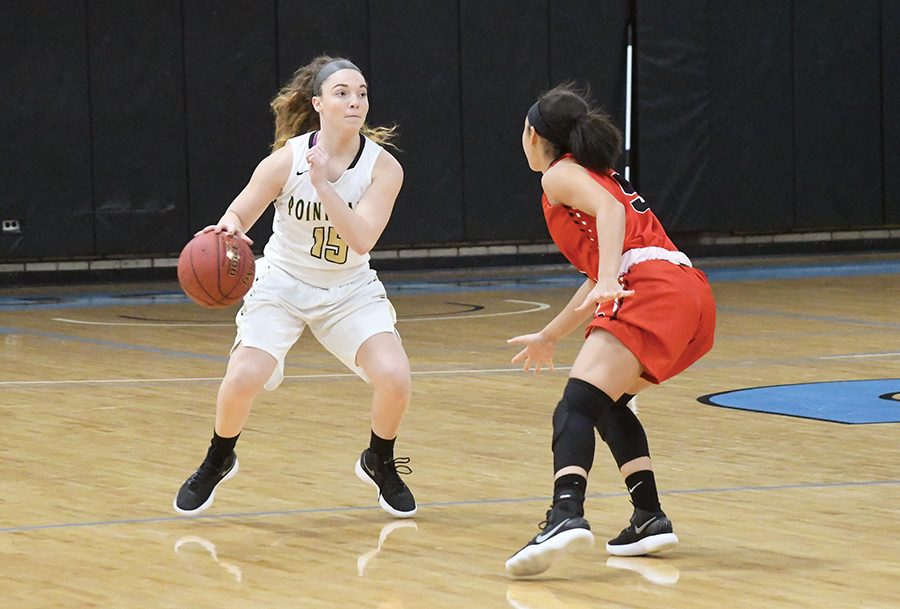 Freshman guard Michelle Burns takes on a Rio Grande defender on Nov. 29 at CCAC Allegheny. She entered the week leading the Pioneers in scoring with 12 points per game.

The Pioneers opened play in 2018 at home with an RSC match against Cincinnati Christian University (CCU) on Jan. 2.

Senior guard Maryssa Agurs led the Pioneers with 14 points coming off the bench. Agurs missed the three games prior, all non-conference losses, due to a hip injury.

“The rehab has helped me a ton in order to finish the season strong,” Agurs said. “I’m doing a lot to make sure my body stays healthy so we can go far into playoffs.”

Point Park maintained a 48-46 lead after three quarters of play, but the Eagles responded with three treys to open the final quarter.

The Pioneers’ defense, led by senior Shaniya Rivers’ season-high eight rebounds, held the Eagles to just one point in the final few minutes.

Head coach Tony Grenek utilized all 13 dressing players, and ten of them had points in the 64-58 victory.

“The style of play we have incorporated this season requires everyone on the team to be on board,” Agurs said. “In order for us to win, we need everyone on our team to do so and I think everyone has stepped up to know their role and do their part.”

Two days later, the Pioneers traveled to Midway for another RSC matchup.

Point Park committed 15 turnovers in total, ten of those coming in first half. Despite those turnovers, the Pioneers still went to the locker room up 35-33.

The Eagles came out in the second half ready to make a comeback. They put together a 13-3 run, giving them the lead 46-38, their biggest of the night.

The Pioneers stepped up offensively from that point on, with three players in double figures in the game.

Senior guard Nikki Corcoran opened scoring for Point Park in the fourth quarter with a 3-pointer and finished with 11 points. Freshman guard Mitch Burns tallied 12 points of her own, recording her 10th double-digit game of the season.

Junior forward Sam Weir ignited the Pioneers in the final minutes. Her 15 points and ten rebounds pushed Point Park to a 64-60 lead with just under three minutes remaining.

“We’re just sick of playing hard and losing [the game] in the final seconds, which has happened a few times to us,” Weir said. “It’s really disappointing to put in all of that effort and play an overall good game to lose it at the end like that.”

Senior forward Baylee Buleca led the team in rebounds with 14, ten of which came in the second half push.

“We are just really starting to click and playing to our potential,” Weir said. “We’re also playing with a lot more energy opposed to the first half of the season.”