Irwin man takes a swim in the Parkway “bathtub” Saturday 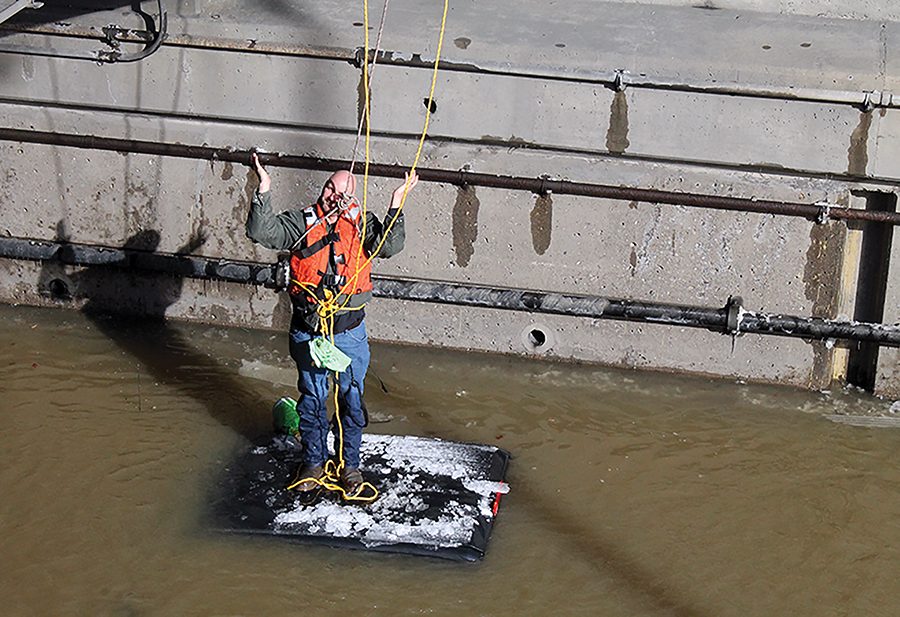 Rescue personnel throw down ropes to Corbin to keep him above water until Pittsburgh River Rescue can make it to him.

Jason Corbin left his home Saturday in his Nissan Frontier to meet his wife at the Wheeling Casino. Before he knew it, he was on the phone with his wife telling her he would be a little late.

He made the call from the roof of his truck with water from the Monongahela River quickly rising up over his boots, wearing a life jacket as firefighters approached in an inflatable rescue boat.

Corbin, of Irwin, thought he could beat the quickly-rising water in the “bathtub” section of the Parkway at Wood Street that was flooding after 11 a.m. Saturday. He drove through what he thought was two feet of water. His engine died, his truck froze and he crawled to the roof where he waited for over a half hour before the firefighters could take him to safety.

The union electrician took a gamble.

“And I lost,” he said. “I appreciate them risking their lives, and their everything to help me for my own

stupidity for doing this. I should have been a little more intelligent.”

Corbin was one of two people rescued from the flooded Parkway Saturday that was a result of a winter storm that brought over five inches of snow on top of ice to the city. The other man was stuck about 30 feet ahead of Corbin in his vehicle. Once rescued, he received medical attention in an ambulance on site. The “bathtub” was reopened to traffic Sunday night.

The storm brought the Parkway and the university to a halt.

Temperatures reached the 60s by noon Friday but quickly dropped below freezing at night. City officials recommended employers let workers go home ahead of the Friday rush hour in anticipation of the storm.

Keith Paylo, Point Park’s vice president of student affairs and dean of students, announced via email Friday afternoon that the university was dismissing all non-essential personnel at 3 p.m. Friday and suspending shuttle services.

Students woke to an email Saturday from Point Park Police announcing the university was closed and classes were canceled. Dance and theatre auditions for Saturday were also canceled, along with Point Park’s basketball games at Ohio Christian.

It was the first time classes were canceled and the school was closed due to weather since January 2014. Paylo said the forecasted combination of ice and snow led to the decision to call the early dismissal and cancel Saturday classes.

“If it was just snow, I don’t think we would have had this decision,” Paylo said Monday. “Our first and foremost concern is the safety of our students.”

Despite the closures, the Campus Activities Board (CAB) still held its Escape Room event, part of the Point Park After Dark series, in the Student Center late Saturday night.

Megan Thorpe, CAB’s vice president of marketing, said 85 people came to the event despite the weather and school closure.

“CAB was happy with the turnout,” Thorpe said in a phone interview Monday. “Point Park After Dark has really improved. Despite the weather, we are still able to draw a crowd and that’s very reassuring.”

While the snow gave way to sunshine Sunday, low temperatures remained in the single digits throughout the region. With a warm front on the way, the National Weather Service (NWS) predicts above average temperatures for the next two weeks starting this weekend.

Pittsburgh has seen more than a half a foot ahead of its average snowfall to this point in the season, according to the NWS. Pittsburgh’s 22.6 inches of snow this winter season put it in the top 20 for snowfall for eastern cities in the United States, the NWS said Sunday night.

As for Corbin, his luck didn’t improve as the weekend moved to Sunday. His main concern after he got back on dry land wasn’t his inevitable insurance hike.

“I need the Steelers to win tomorrow because of my stupidity,” Corbin said.