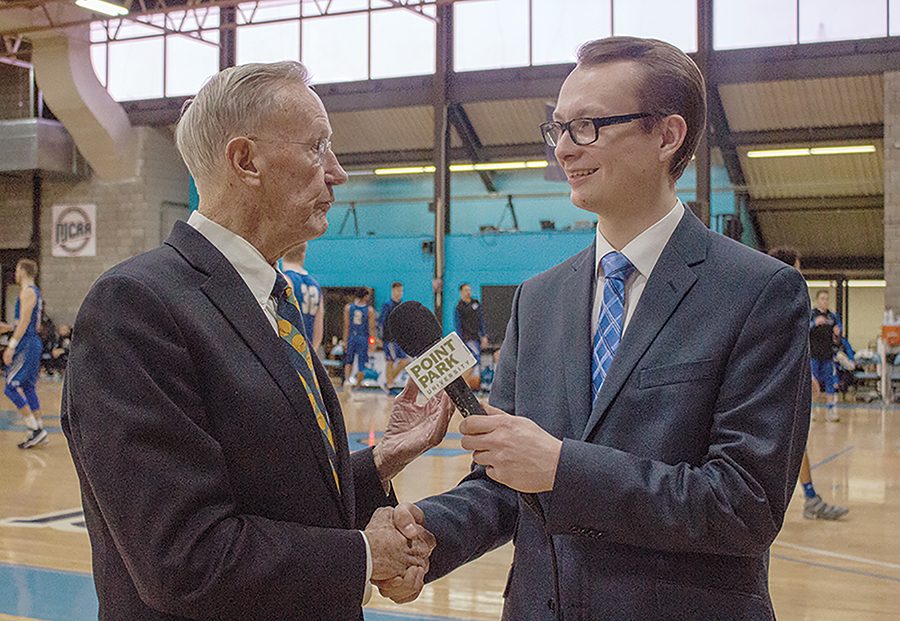 Jerry Conboy (Left) interviews with The Globe’s co-sports editor, Josh Croup (Right) at the men’s basektball program’s 50th anniversary celebration Saturday at CCAC Allegheny. Conboy coached the Pioneers for 20 years from 1969-89 and was inducted to the Pennsylvania Sports Hall of Fame last year.

The history of the men’s basketball program includes hundreds of wins and losses, championship trophies, multiple home venues and practice facilities that required hefty daily commutes and iconic figures that have made impacts far beyond the basketball court.

Five decades of those memories, stories and legends shared the same roof Saturday for the 50th anniversary celebration of the storied program.

Each era of Point Park basketball was represented and honored during halftime of the men’s game against Ohio Christian at CCAC Allegheny.

The group of hall of famers, originals and recent graduates, shared different yet similar stories throughout the afternoon. Basketball has changed a lot over the course of five decades, but the challenges players face today of attending school at an urban campus remain the same.

A common theme from past generations of Pioneers was the pride they felt about the growth of the university, vastly expanding from two buildings when many of them began their playing days.

Ed Josefoski, a true Pioneer in every sense of the word, witnessed the growth firsthand. A member of the original men’s basketball team, he led the team in the first four years of the program on the court, becoming the first player to score 1,000 points and grab 1,000 rebounds.

“I just can’t believe it,” Josefoski said of the school’s growth. “I’m so proud of what Point Park has accomplished.”

Point Park cycled through two head coaches during Josefoski’s first two years in the program and then found its anchor for the next 20 in Jerry Conboy.

The newly inducted member of the Pennsylvania Sports Hall of Fame returned to the school he helped put on the map Saturday.

“Point Park means everything to me,” Conboy said. “My 20 years were great, fantastic. I am so fortunate.”

His successor for the next 27 seasons and the all-time winningest head coach in Point Park history, Bob Rager, was not in attendance for the anniversary.

Bobby Franklin, one of Conboy’s best players and the top scorer in program history, was at the event, but he almost didn’t even make it out of Cleveland to begin his Point Park career in 1973.

Franklin was watching cartoons when he got a phone call asking him to tag along to a basketball tournament in Sharon, Pa. If he went, he was told, there was a chance another team would show up shorthanded and need an extra player.

“My first reaction was to say, ‘No. I’m not going,’” Franklin said. “I thought about it for a couple minutes and I called it back and said, ‘Well I’m not doing anything but watching cartoons, so pick me up.”

Franklin sat in the stands with his shoes on standby when a team from the Bronx showed up missing one of its players. He joined the team and showcased his skills.

He didn’t know it at the time, but also in the stands was a certain head coach from a small school in Pittsburgh that was in the early years of building a new basketball program, it was Conboy.

Giving up an afternoon of cartoons ultimately led to a career as an all-time great Pioneer. Franklin is the only player in Point Park history with more than 2,000 points (2,020) and also holds the program’s career record for steals with 314.

The halftime recognition ceremony Saturday was bookended by an alumni game in the Student Center in the early afternoon and a reception after the game at McFadden’s on the North Shore.

The day for alumni not only welcomed the families of former players and coaches, but also a former PA announcer. Josh Widdowson, a 2005 graduate, came back to the mic for Point Park’s game against Ohio Christian.

“There was a lot of great energy,” Widdowson said. “I always have fun coming back.”

The alumni game early in the day featured players from the most recent decades of Point Park basketball testing their skills against Father Time, including Pittsburgh sports columnist and radio host Paul Zeise.

“It was great to be there with the guys, but I’m hurting,” Zeise said with a laugh after halftime Saturday. “I’m 47 man, I can’t play like that.”

Zeise, known to his teammates as “The Hammer,” played from 1989-93 and was also known to quickly get into foul trouble. He once fouled out in the first four minutes of a game.

He was joined on the court by all-time great Pioneers including Randy Smith, the most recent men’s basketball player inducted to the Point Park Athletic Hall of Fame, and DeVaughn Halsel, a 2011 Hall of Fame inductee and a leader on the 1996-97 Final Four team.

Current head coach Gabe Bubon watched from the sideline during the alumni game with his team in attendance to meet some of Point Park’s all-time best. His players came out from the locker room early during halftime Saturday to watch the ceremony.

Bubon is an alum of the program and was one of the former players recognized at the half. He still holds the program single-game records for points and three-pointers.

The alumni, including Bubon, had one common message for the current players.

“Cherish the opportunity you have right now because once when it’s done, it’s done,” Bubon said. “You don’t realize that when you’re playing and when you’re in school how quickly everything goes.”

“They’re good guys,” Bubon added about the alumni who came back. “They’re part of the family.”