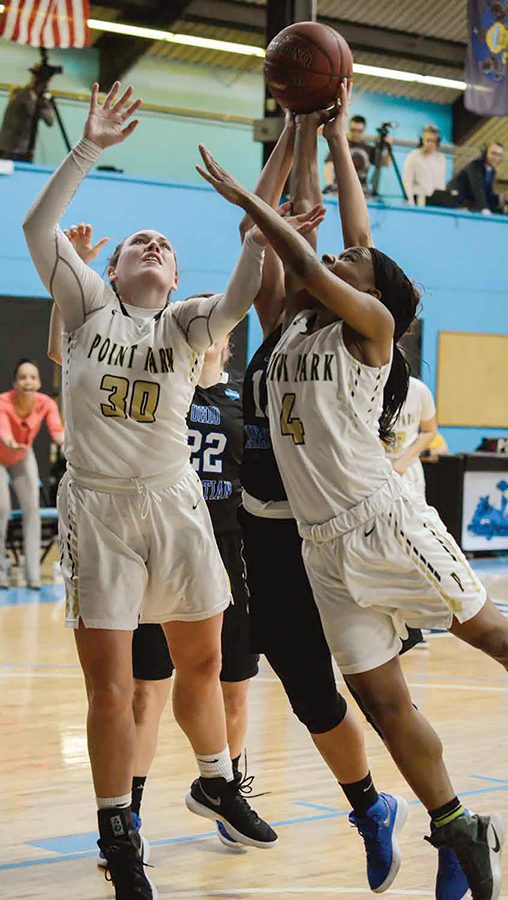 The women’s basketball team’s River States Conference (RSC) winning streak came to an end as it traveled to Indiana University (IU) East to close out its January schedule last Tuesday.

The Pioneers took to Richmond, Ind. for a rematch against the only team that has beaten them in 2018.

Point Park went back and forth with the Red Wolves in a game that featured 11 ties and 15 lead changes. IU East entered the game in second place in the RSC East and received votes in National Association of Intercollegiate Athletics (NAIA) Division II Top 25 Poll.

“They have a tremendous senior class, they have a tremendous coach, and they’ve experienced a lot of winning, so that was the difference,” head coach Tony Grenek said. “We were up in the last minute of the game and we let a two-point lead get away, but my kids played their hearts out and they worked their butts off.”

After ten minutes of play, Point Park was up 28-22. The Red Wolves answered in the second half and trailed 48-47 at the half.

Junior forward Sam Weir again led the offensive effort for the Pioneers with a season-high 27 points, 18 of which came in the first half.

Senior guard Maryssa Agurs was two points off her season-high with 20 on the night, registering the fifth 20-point effort of her career. Freshman guard Michelle Burns and sophomore guard Tyra James each contributed 12 points, with James shooting 4-for-6 from beyond the arc.

Mackenzie Campbell of IU East led all scorers with 39 points, setting a school record in the process.

Campbell tied the game at 94 with 26 seconds left after a perfect trip at the free throw line, part of her 17 points scored in the final quarter.

“We blew it at the foul line,” Weir said. “We went 16-for-25. They were fouling us, so if we were making those, we’d ice the game. We also made a couple of stupid mistakes at the end.”

Point Park’s 94 points ties its best offensive effort of the season, first put up in the fourth game of the season in a non-conference match at Penn State–Greater Allegheny.

The Pioneers returned home Saturday for the last time this season to host Ohio Christian University (OCU) and to celebrate Senior Day.

“I want them to know how great of human beings they are,” Grenek said. “They’re just a tremendous bunch. Some have played multiple sports, some have had to work their way through college. I’m very proud of them.”

“The seniors have meant so much to me and I’ve grown so close with them,” Burns said after the game. “They made me really want to come out here and do my best today.”

The seniors led the Pioneers to a 78-47 win, and totaled 38 points between the seven of them.

The Pioneers’ defense allowed OCU to make only one of its first 17 shots as they carried a 19-7 lead at the end of the first quarter. Point Park kept its 12-point advantage at the half, leading 35-21 going into the locker room after forcing 19 turnovers.

Point Park opened the third quarter with a 12-1 run and ended the frame up 60-42. The Pioneers outscored the Trailblazers 18-5 in the final quarter, giving Point Park the win.

“I think we’re just going to use this one as momentum and honestly I think we play pretty well on the road, so I think we’ll be ready,” Burns said.

Burns led the Pioneers offense with 25 points, just two points behind her season high. Only Agurs joined her in double digits with 10 points.

Point Park tied a season-high in conference games with 30 forced turnovers. Eleven out of the 14 players that saw minutes on the court had a steal.

“It’s awesome to have my whole family here, and it’s cool that my son is here too,” Weir said. “He won’t remember it, but I’ll be able to remember that he was here. It’s nice to have my senior day with some of my best friends like Shaniya and Baylee, all of them.”

The Pioneers are now in the final stretch of regular season play, with only four road games remaining. After traveling to Carlow Tuesday night, they travel to the University of Rio Grande for a rematch against the team ranked 21st in the country.

Point Park clinched a playoff berth with the win, with three teams in the playoff picture separated by one game entering the week.