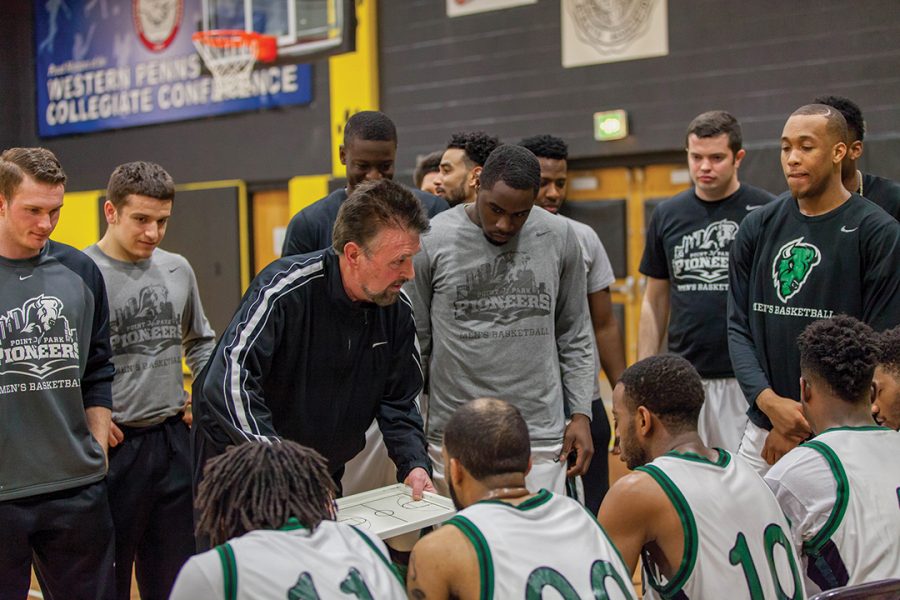 Bob Rager coaching calls a play during his final season as head coach of the men’s basketball program. Rager passed away the night of Sept. 19. He spent 27 years as the head basketball coach.

Bob Rager came to Point Park as the head coach of the men’s basketball program in 1989, but his time and legacy as a Pioneer started 19 years prior.

Rager did enough during his time as a student athlete to leave a legacy on campus forever, but he was hardly done.

In 1970, Rager attended Point Park and joined the team he would eventually head. During his four years he racked up 1,071 career points, ranking him 16th on the list of all-time scoring leaders. He was also the Pioneers’ first ever National Association of Intercollegiate Athletics (NAIA) All-American. He was even voted the Small College Player of the Year by the Pittsburgh basketball writers during his junior season.

When he returned to the court, this time as a coach, Rager would spend 27 additional years as a Pioneer.

He tallied 381 wins over those 27 years, earning the title of the all-time winningest college basketball coach at four-year schools in the Pittsburgh. The other four on the top five list includes Pitt’s Doc Carlson (367) and Jamie Dixon (328), Duquesne’s Chick Davies (314) and Rager’s predecessor at Point Park, Jerry Conboy (305).

William “Billy” Ketrow joined the athletics and sports information departments of Point Park in 1991, working alongside Coach Rager for a lot of his time as a Pioneer. Over the course of their time together, Ketrow got to know Rager and his style of coaching very well.

“His philosophy was no defense, run-and-gun basketball,” Ketrow said. “It did not matter if you averaged 30 points a game or if you played three minutes a game, you run and you gun and if you did not take the open shot, you hit the bench. That’s why [Point Park] was top five in offense for what seemed like an entire decade.”

That all-in offense led Rager’s Pioneers to the NAIA National Tournament on three occasions, a trip to the NAIA Final Four in 1996-97 and an appearance in the NAIA Sweet 16 in 2000-01. His 2006-07 team set two school records, one for wins in a season with a 29-2 record and the other for the highest national ranking the school had ever received, sitting No. 3 on the NAIA Top 25 poll that year.

With his fast-paced offensive style came the occasional tough loss. No matter how few or far between, Rager made sure he got his point across when he was unhappy with the team.

Zac Weiss was a student reporter during Rager’s tenure and worked closely with Rager’s teams during his four years at Point Park, allowing him to experience what coaching was like on the opposite side of the score sheet.

“After losses in which the team did not play to his liking, Coach Rager would tell a student reporter that the players were not available and he would be the lone voice for the team,” Weiss said. “I remember when I first started at The Globe we were to have at least three live sources, so that threw a wrench into those plans, but it was a clear message and a moment in which he was trying to teach his team.”

Rager turned those teaching moments into the most wins in not only Point Park history, but in Pittsburgh history.

“More important than all of Bob’s achievements – which are enough to cement his legacy at Point Park – is the role he played in supporting and developing the many student-athletes who crossed his path and his time at the university,” Keith Paylo, Dean of Students, said in a notice sent out to the entire Point Park community on Friday. “He went above and beyond to forge strong relationships with his players, and his mentorship allowed them to reach their potential both on the court and in the classroom.”

Rager had an impact on the campus community that ran much deeper than just his colleagues and athletes. Student media began covering games live during his tenure, and he treated each student reporter as one of his own.

“Bob was someone who was always very supportive of me and what I did, whether it was in capacity with The Globe or as a Sports Information Student Apprentice when I was on the road [with the team],” Weiss said. “He treated me as if I was one of his players. I could always come to him if I needed something and he always offered me a friendly hello with a smile.”

Ketrow kept the score book for the men’s basketball games, allowing him to also experience Rager’s relationship with media firsthand.

“When they started taking media personnel to cover games live on the road, Rager said that it was gratifying to see the play-by-play and color commentators getting better with each individual broadcast,” Ketrow said. “He would always make room to have us come. With him, it was all about making everybody better, whether it was himself, the media, and to some extent, everybody that the man touched.”

“He would recruit guys that had been in trouble with the law and wanted to get on the straight and narrow,” Ketrow said. “When their records scared away bigger and more traditional schools, Rager would take them in and make them better athletes and people. That was the type of man he was.”

Coach Rager finished up his time on the Pioneer sidelines in 2016, but no one expected him to pass away at his home just two years later.

According to his family, he spent the last few years working at his restaurant in Jefferson Hills, sitting on the white sand beaches of Siesta Key, Fl. and coaching basketball at his local YMCA with his grandson.

“I will remember Coach Rager as an individual who loved to teach and provide opportunities to individuals who may not otherwise have had the opportunities,” Weiss said. “Coach Rager is one of many reasons why I am proud to say I graduated from Point Park.”

Rager’s legacy will be one that lives on forever within the student center and all over campus at Point Park. From fellow coaches to staff, students, athletes and everyone in between, Coach Rager left a lasting impression on anyone he came into contact with.

“He was a great player and a great coach, but an even better man,” Ketrow said. “There will always be a little hole in the athletics department at Point Park University. Sleep well my friend.”