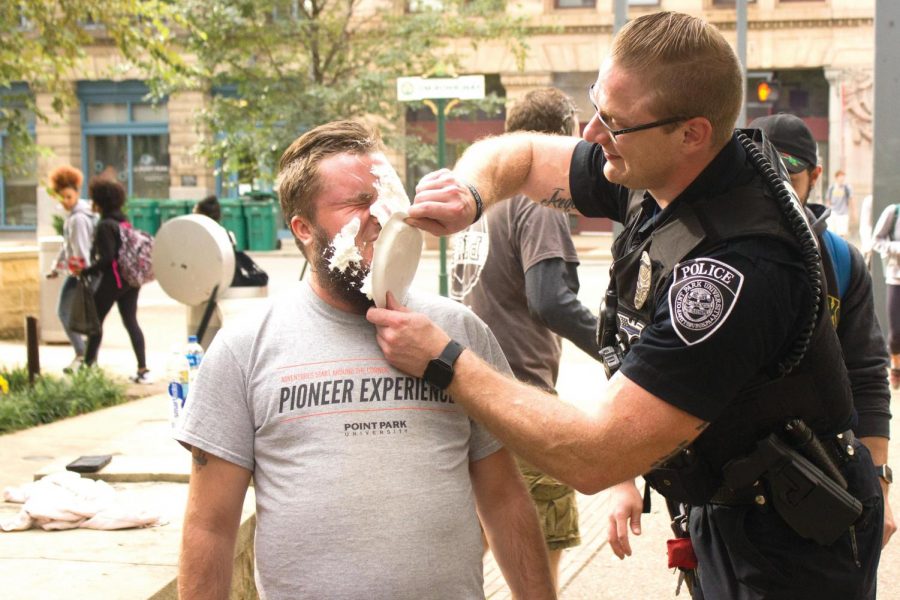 From sneak attacks to being double-pied, the public and students alike gathered in Village Park to throw dessert in rugby players’ faces.

President of the rugby team and senior economics and finance major, Steven Reed, said that he hoped plenty of people would come out to support the team – and crowds of plenty showed up to pie the ruggers last week. Reed said the players would be in Village Park rain or shine.

“We’ll be out there either way,” Reed said. “If we’re going to get pie on us, we might as well get wet too.”

Luckily, the weather held off and it didn’t rain during the event.

Pie-a-Rugger is an event held to support the Rugby team in its upcoming spring season.

“Pie-a-Rugger is a fundraiser that benefits the team and the club,” Reed said. “We go out to Village Park; we set up a tarp, a table and some chairs and we have people come to throw pies at us. It costs $1 for a whipped cream pie and $3 for a fruit pie.”

The event started off to a slow start but quickly built up intensity as more people showed up to pie a player.

Freshman cinema production major Noah Neal, was surprised at the number of people that showed up to the event.

“I thought it was fun and it was a lot more involved than I expected,” Neal said. “I thought people would show up kind of sporadically and pie someone and leave.”

“It was a fun experience,” Newell said. “I thought it was cool and a lot more people came out than what I was expecting.”

Both men are new to the team and didn’t know what to expect from the event.

“It’s great that the public donated to us, not just the college kids,” freshman mass communication major David Armitage said.

Several times throughout the event, members of the club had to go out and buy more whipped cream because they were selling out quickly.

“We ran through stuff a lot faster than I thought,” Newell said.

All of the players said that it was a great event but that showering after the event would be the best part. Players were covered in whipped cream and fruit pies by the end. It was everyone for themselves.

“Everyone got pied,” Newell said. “Nobody was left out.”

All of the proceeds from the event go to benefit the club. The club isn’t affiliated directly through the univeristy, so the costs of booking fields, referees and tournaments are on the club. Reed also said that he would like to get new apparel for the team.

Pie-a-Rugger is only one event that the Rugby team hosts. The team also hosts its own auction called Rent-a-Rugger.

Reed explains that Rent-a-Rugger is an event where the Rugby team auctions off dates with their 25 members. Players come out onto a stage to a song of their choice and a small bio that they created explaining themselves.

It is conducted as a live auction where the audience places bids on a date that a Rugby player chooses.

Freshmen members of the team are looking forward to their first Rent-a-Rugger event.

Rent-a-Rugger does not have a set date yet; however, Reed is hoping to host the event in early November.