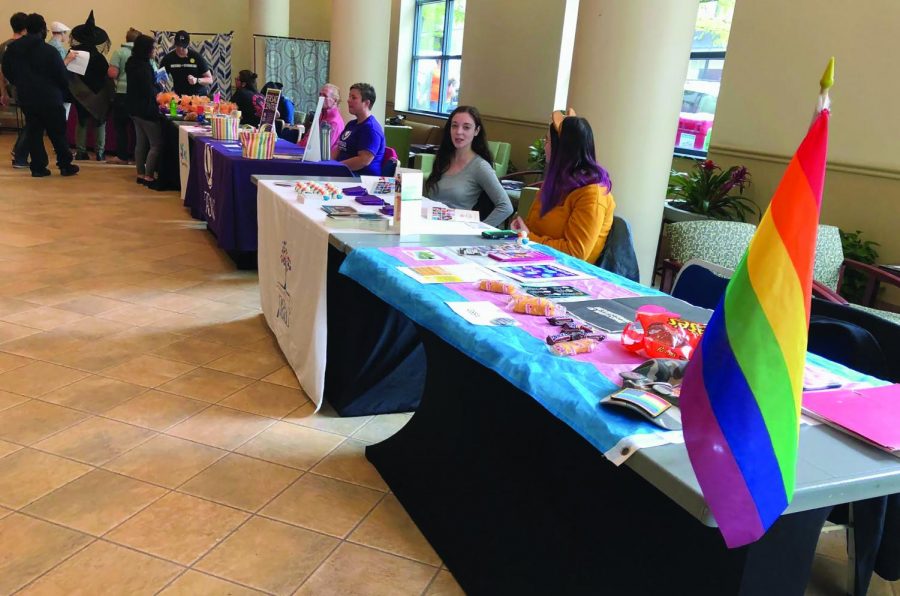 The LGBTQ+ Resource Fair was held last Wednesday in the Lawerence Hall Lobby. Organizations such as GSSA Point Park, Planned Parenthood and Pittsburgh Action Against Rape were some of the vendors present.

An LGBTQ resource fair was held in the Lawrence Hall lobby last Wednesday, with booths meant to aid LGBTQ students.

Panelists dressed in Halloween costumes sat in booths that lined the walls to offer resources, pamphlets and even STI testing to interested students.

The event was organized by senior Public Relations and Advertising major Autumn Barszczowski, who got the idea to host the fair while taking an LGBTQ mental health class at Point Park.

“I wanted something where students could see that there are outside organizations as well as organizations on campus that are available to LGBTQ-plus students,” Barszczowski said.

Barszczowski was interested in using the mental health course to fulfill her honors requirement, and decided to orchestrate the fair to complete the
honorization.

While she originally wanted to schedule a panel discussion, the more planning progressed, the more Barszczowski realized she wanted something similar to the student organization showcase done at the beginning of the year.

Dr. Sarah Schulz, professor of the LGBTQ mental health class and Barszczowski’s faculty advisor for the event, aided Barszczowski with finding contacts and advised her through the
process.

“Autumn came up with this idea to bring all of these community organizations in to share resources and just basically show up in a way to say that Point Park supports our LGBT students,” Shultz said. “That alone helps enhance mental health.”

The LGBTQ mental health class is new and stemmed from a previous class Schulz taught entitled “The Psychology of Diversity.” After noticing an interest in LGBTQ and gender issues from students, Schulz developed a class to allow students to delve deeper into issues impacting the LGBTQ community.

The class discusses historical perspectives of how social classes evolved, how changes in the medical system have impacted the community and psychosocial
issues.

One of the tables present at the event was representing Point Park’s own Gender and Sexuality Spectrum Alliance. Representing the GSSA was president Elliot Wallace, a senior Criminal Justice major. He explained the GSSA is there to provide LGBT students with resources or point them to places that can provide them with services they may need.

“We are the bridge between the school and outside organizations,” Wallace said. “We recognize that LGBT students need resources outside of what the school can provide and so we’re happy to be the bridge into organizations like Planned Parenthood, PERSAD or whatever they need.”

“It’s a pretty interesting time for LGBT students, and so anything that shows any sort of support for LGBT students is important, and it’s just nice to see so many organizations willing to meet students on their turf to show that they’re available,” Wallace said.

Barszczowski said a resource fair for LGBT students would be a first for Point Park, though she feels the atmosphere has always been generally accepting.

“There’s this idea at Point Park that we’re okay for LGBTQ-plus students because we’re an arts school, and that’s usually been the extent, and we’ve done better in the years that I’ve been here. But I’ve never seen anything like this,”  Barszczowski said, adding that she hoped the Honors Student Organization will do more events like the resource fair in the future.

“I wish we would have had this sooner – or going into the future, have more things like this. It’s kind of easy for LGBT students to feel like their concerns aren’t being met, and it’s is a very validating sort of environment,” Wallace said.

Schulz wanted students to walk away with certain assertions about the LGBTQ community surrounding Point Park and the support system within it.

“What we would want the Point Park wider community to know is that there’s a lot of support for LGBT people both on campus and in the wider city,” Shulz said. “It’s a challenging time right now for a lot of people and that can impact people’s mental health, so if people are feeling unsafe, […] there are supports right here on campus and in the community of Pittsburgh.”