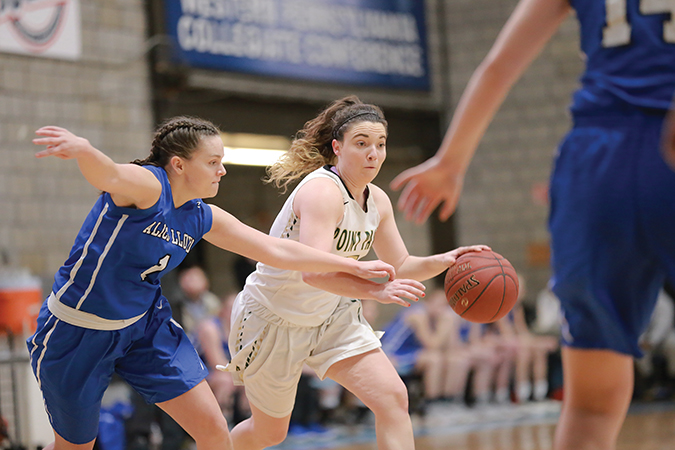 It was a weekend full of career highs and school records for the women’s basketball team.

It all started on Thursday when the Pioneers hosted Asbury University for the first River States Conference (RSC) of the weekend.

Most notably amongst the Pioneers’ successes was sophomore guard Michelle Burns’ career-high 33 points on the night, which was over one-third of the Pioneers’ total points.

“In warm-ups, I was feeling pretty good,” Burns said after the game. “I made my first shot and it was just a good game for me.”

27 of her 33 points came in the form of 3-pointers. Those nine treys were the most in one game in school history, breaking the record of eight previously held by former assistant coach April Austin.

Senior forward Sam Weir missed her second game in a row due to an ankle injury.

Overall, Point Park had one of the best offensive games of the season, shooting 55 percent overall, 50 percent from beyond the arc, and out-rebounding the Eagles 52 to 26.

After all of the records set, Point Park took the victory 91-62.

“This win was huge,” head coach Tony Grenek said. “We always say that wins at this point in the season are the most important and this was a huge step in the right direction for us heading into the rest of the season.”

The same names showed up all over that stat sheet two days later for a cross-division match-up against Alice Lloyd College.

Alice Lloyd knocked Point Park out of the RSC Tournament last year after an overtime victory in the quarterfinals.

This year, the match-up was on the Pioneers’ home turf.

Alice Lloyd came ready to play, shooting 52 percent in the first half and had the edge over Point Park in rebounds.

“We came in here knowing it was going to be a tough game,” Smith said post-game. “Every time we play them, they are very well-coached.”

The second half fell in Point Park’s favor. The Pioneers held the Eagles to 30 percent in the final 20 minutes, forcing 20 turnovers and 10 steals.

James gave Point Park its first lead of the night when she sunk two free throws early in the fourth quarter.

After a small run by Alice Lloyd, Burns tied things up at 71 before Weir tallied an old-fashioned 3-pointer for a late 74-72 lead. A steal by the Eagles with 24 seconds left would tie things up once again as regulation time expired.

“We were lacking confidence a little bit in the first half, but we knew if we stayed positive and capitalized on our strengths, we could pull out the win,” Smith said.

Weir did not start, but returned after missing two games to her injury. Both her and Smith tied their career highs in the game with 31 and 25 points, respectively.

“To be honest, I really did not think that I was going to contribute that much,” Weir said. “I was just trying to get good minutes. My ankle has really been bothering me, but I just kept going with it.”

Weir also notched another double-double with 16 rebounds to add to her 31 points.

Burns returned from her school record performance to add 16 points to the scoreboard, and James rounded out the Pioneers in double digits with 12 points.

Smith tallied half of Point Park’s 14 overtime points to solidify the win.

“We were wearing them down the whole time,” Weir said. “The game should have been ours after the fourth, but things happen and we had a lot of girls step up to give us the win.”

Point Park currently sits third in the RSC East Division and has five games left in the regular season, two of which are home games but three of which are in Pittsburgh.

They will tip off next at home hosting Rio Grande next Tuesday after a trip to Carlow, and finish off the season with games against RSC opponents West Virginia Tech, IU East, and Ohio Christian.