Women’s March down Grant Street draws hundreds; marchers chant “this is what democracy looks like” 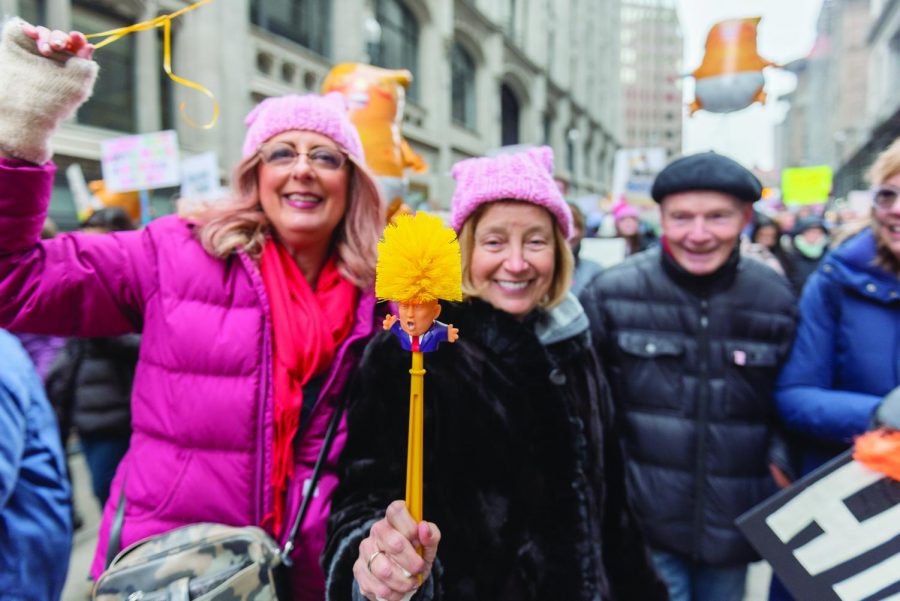 The temperatures were near freezing, but that did not stop people of all ages, races and genders from participating in the hours-long event. Although the Women’s March was not scheduled to start until between 11 a.m. and 12 p.m., hundreds of participants had already arrived well before 10:30 that morning, carrying mini baby Trump balloons and dozens of signs protesting the Trump administration and promoting gender equality, women’s reproductive rights and intersectional feminism among other subjects. Music with the themes of women and justice blasted from speakers as people gathered on Grant Street, as well as during the actual march from Grant Street to Market Square.

The march itself started around 12 p.m. Hundreds of marchers were led by an inflatable Statue of Liberty bust. Marchers in the front were those with children and those with mobility issues while the able-bodied adults were instructed to stand in the back. Leaders with megaphones directed the marchers in different chants such as “Blame the system not the victim,” “Trans Lives Matter” and “This is what democracy looks like.”

Upon walking from Grant Street to Fifth Avenue on to Market Square, marchers spilled out onto the downtown hub and were immediately greeted by an inflatable depicting President Trump as a chicken, positioned directly to the right of the stage. A number of women, religious leaders, nonprofit organizers, high school students and activists spoke on the stage, reiterating the points of non-discrimination, diversity and inclusivity. A few of the speakers were Jewish, and in light of the anti-Semitism controversy surrounding the Women’s March on Washington, emphasized that Jewish members of the Pittsburgh community were a central part of the women’s movement in the city.

Among those with signs was a hand-drawn depiction of Supreme Court Justice Ruth Bader Ginsburg reading “I wish a b***h would” surrounded by pink sparkles. The left-leaning justice has become a popular cultural icon associated with the modern feminist movement. The young female demonstrator with the sign, Geneva, decided to appreciate Ginsburg’s role in the women’s movement.

“I’m marching today for all women: any race, trans women, any religion,” Geneva said. “That’s why I’m here. This is not about white women. This is about all women and our fight for equality. [Ruth Bader Ginsburg] paved the way for us to have the movement and the revolution that we have now, and she was part of this movement before it even existed so that’s why I decided to honor her today.”

An older man who goes by Pat from the group “Resist” was donning a sign that read “2 Years – 6000 Lies – Our President.” Pat is a seasoned activist from Washington County and has attended at least 14 marches.

Organizers of the march, including the Director of the Women’s March on Washington-Pittsburgh, Tracy Baton, first had candidates running for local political office speak in front of the crowds of hundreds on the steps of the City-County Building, urging them to vote, be politically active and even run for office themselves.

The Women’s March on Washington-Pittsburgh had a number of partners and sponsors, including YWCA Greater Pittsburgh, a local non-profit in Pittsburgh whose goals are to empower women and eliminate racism. Angelica Perry, the Development Officer from YWCA, outlined the purpose of this year’s march.

“The march is entitled ‘Building Bridges Stronger than Hate,’ and so for [YWCA] we feel that the focus of this march is on connections and unity in the midst of violence that has occurred both locally and nationally and that has adversely impacted the individuals that we serve,” Perry said. “So really this year I think furthering connections and unity is sort of the next carry-over step from those initial marches that really raised a lot of awareness.”

YWCA Greater Pittsburgh also plans to keep on working towards those goals after the Women’s March, using the Pittsburgh Equity Indicators Report to guide their efforts. According to Perry, YWCA believes that they can significantly improve the issues of adversities faced by women, especially women of color, particularly regarding salary equity in Pittsburgh by 2020. The impact of Women’s March is very much felt in activism circles, but Perry believes the change they make have to materialize in the aftermath of the demonstrations.

“I think the Women’s March and sister marches around the nation continue to draw attention to the lived experiences of women in our communities,” Perry said. “They ensure that the issues that affect these women do not get brushed aside or forgotten about or overlooked. I think the real challenge with all of these marches and the challenge that we’re going to be tasked with here at YWCA Greater Pittsburgh is harnessing the momentum of these marches to sort of move into the next phase of really transformational change.”