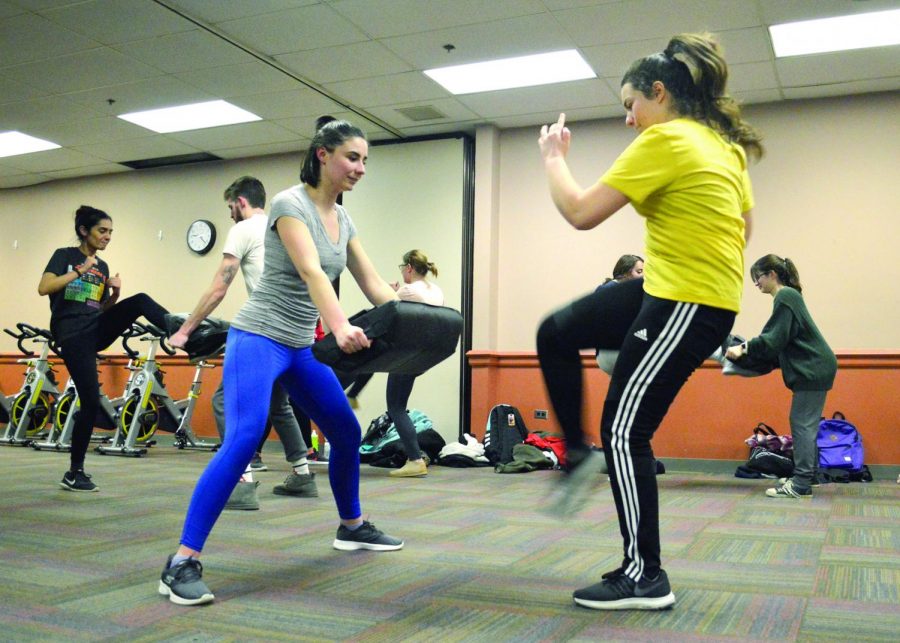 Future Educators of America practiced Krav Maga, an Israeli military form of self-defense. The class brought 22 students into the Student Center Tuesday evening to learn from Kathy Kluk, who has practiced the form for 11 years and is a certified trainer.

The second floor of the Student Center was filled with practicing teachers throwing punches and kicks Tuesday evening.

The Future Educators of America were learning the art of Krav Maga – an Israeli militant form of self-defense – from certified instructor at Crafton’s Wright’s Gym, Kathy Kluk.

“The first thing we always teach in Krav Maga is that your first form of defense is awareness,” Kluk said. “Be aware of your surroundings, whether that means walking home from campus at 2:00 in the morning, running with your headphones on or walking to your car at night talking on the phone, thinking you’re safe when you’re not.”

Kluk said empowerment is essential to the practice as well.

“What’s really exciting for me as a Krav Maga instructor through the years is to see young women come to my class not very sure of themselves or what they can do and leave feeling empowered,” Kluk said. “What we like to say is after a 60 minute class, you’re going to take away something.”

FEA President Emily Palma planned the event for members because her aunt, Kluk, requested to teach a class on campus.

“I thought, what a better way to kind of like start the semester for our club because the new members get to know other people through this,” Palma said. “She does a whole lesson on campus violence and rape and how to protect yourself so I thought it’d be a cool thing to do.”

Palma has taken nearly a dozen classes herself.

“I definitely felt stronger about myself and coming in contact with strangers,” Palma said.

Palma said that any event FEA sponsors, they like to turn into a learning experience.

“As teachers, we always want a lesson,” Palma said.

The 22 club members followed Kluk’s instruction as she showed them moves like the “hammer punch” and “groin kick” as valid forms of defense to flee an attacker.

Most kidnappers attempt to snatch victims from the street or lure them into their vehicles.

“The statistics show that if somebody can move you from point A to point B – meaning from the sidewalk into their van or vehicle – your chances of survival go down by 90 percent,” Kluk said.

“Stranger kidnappings” account for 24 percent of all recorded kidnappings, according to the Poynter Institute. Studies showed these types of crimes victimized females more often than men, occurred outdoors and associated sexual assault with females and robberies with male victims.

Krav Maga relies on natural instincts.  Kluk mentioned the importance of keeping space between oneself and strangers.

“I always say the distance it is it’s 10 feet. So if I’m walking on the sidewalk and a car pulls up to me and rolls the window down saying ‘hey, can you give me directions,’ I don’t want to approach that car window,” Kluk said. “I can quickly be grabbed by whatever I have on and pulled into that vehicle.”

Compliance is also a key factor to keep in mind to avoid conflict.

“If somebody does approach you saying ‘give me your keys, give me your wallet, give me your phone, is that really worth your life,” Kluck asked. “It’s not. All those things are replaceable.”

Students partnered up and mimicked the motions, breaking a sweat in the process. Although the idea of having to defend oneself isn’t funny, practicing the drills with friends warranted a chuckle or two.

“I didn’t expect to sweat that much,” Vittoria Will, a sophomore education major, said afterwards. “It was a really good full body workout and you’re also educating yourself on how to live in the city.”

Wills said that if classes were held regularly on campus, she would definitely be interested.

“If they were held maybe once a week, that would be awesome,” Wills said.

It takes about three months of consistent training to move along to other forms of self defense, according to Kluk.

Palma said that since interest was high, FEA is planning on scheduling a class for students across all majors to attend closer to finals week.

“It’s a good thing to know the techniques as being immersed in the downtown area,” Palma said.