New resolutions drafted due to alleged lack of transparency 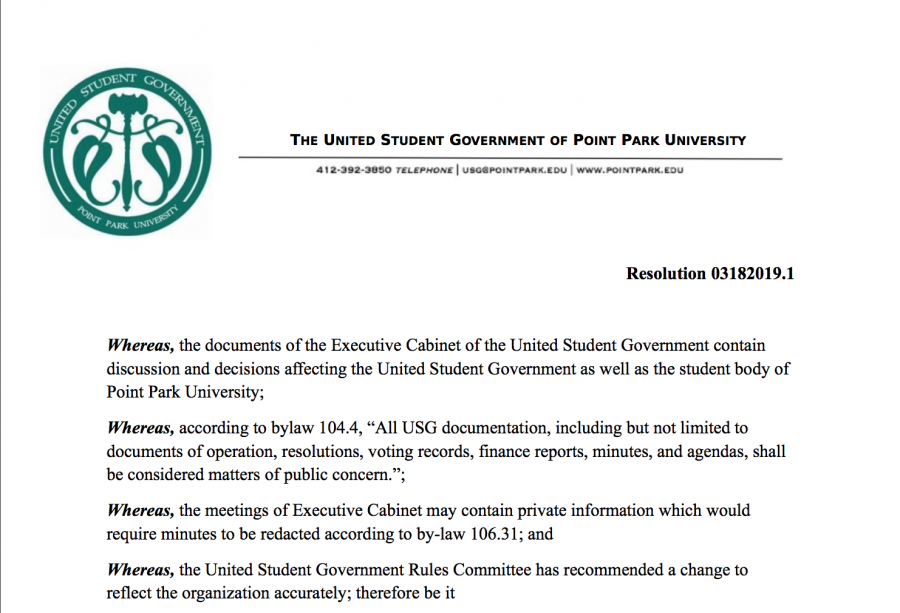 The United Student Government (USG) Rules Committee approved a resolution in concern that executive cabinet meetings were being closed more often than not, and minutes from the meetings were unnecessarily redacted and incomplete.

Resolution 03182019 and Resolution 03182019.1 were drafted primarily by Senator Mathew Johnson, Senator Alexa Lake, Senator Jake Berlin and Senator Grace Tyler Frank-Rempel, to be voted on in next Monday’s Legislative body meeting regarding accusations of a lack of transparency by the executive cabinet.

“New senators were told at the beginning of the year and given the perception that it wasn’t their right to attend executive cabinet meetings,” Johnson said. “Before the first forum, we had decided which senator was going to play music and it was just his name redacted. That’s what gave away the fact that executive cabinet was redacting information that was unnecessary.”

The current USG constitution sets out governmental responsibility under the Sunshine Act as follows:

● 106.1 This section shall be known and may be cited as the United Student Government Sunshine Act.

● 106.2 In reflection of the Pennsylvania Sunshine Act, it is the right of the public to be present at all USG meetings in order to witness the deliberation, policy formation, and decision making, and secrecy in public affairs undermines the faith of the public in government and the public’s effectiveness in fulfilling its role in a democratic society.

● 106.3 Official action, deliberation, and policy formation at an official meeting of the USG shall

be open to the public unless closed with specific cause.

● 106.31 Any USG meeting can be closed if the public disclosure of information at that meeting would violate federal or state laws or the rights of a particular person.

● 106.4 All USG documentation, including but not limited to documents of operation, resolutions, voting records, finance reports, minutes, and agendas, shall be considered matters of public concern.

Both resolutions add another layer of accountability to executive board members and the decision to close meetings, redact information, and included language that focused on public access to documents.

Statements in the resolution include:

“Any official USG document can be withheld or redacted with the written consent of a USG advisor if the public disclosure contained information that would violate federal or state laws or the rights of a particular person… Only that information which must be closed from public concern as defined in this section may be withheld… Other matters in official documents must be open to the public….All signed and written agreements from an Advisor for reasons mentioned previously shall be attached to the meeting minutes or official documents to which it pertains.”

Lake elaborated on the need for such a document to be added to the constitution.

“The problem is that ‘rights’ is very loosely defined and the current executive cabinet is taking it to mean the mention of anybody’s name,” Lake said. “We understand that personal issues do have to be withheld because that is the rights of an individual. They’re using their discretion very broadly.”

Berlin also expressed concern for what exactly has been withheld in closed executive meetings.

“They’re not personnal in the private sector that are identified by numbers for confidentiality,” Berlin said. “We were elected to serve the students, not hide from them. I want to know why senators who are not in the room are mentioned so frequently.”

The email, sent by Communications Director Shelby Fink, was a response to multiple Sunshine Act requests filed on March 7 from members of the legislative body, representatives of U-View and an email sent by The Globe requesting interviews with President Kaylee Kearns and Vice President Brittany Arp.

“We understand that some senators may be frustrated by executive cabinet, but we cannot fix an issue if the issue is not presented to us,” the email read. “I think it is important to remember why we all joined USG and to remember that we are here for the student body.”

The statement is in contrast with concerns brought to executive cabinet members, according to multiple senators who went on the record to express their grievances to The Globe on the apparent lack of transparency within executive cabinet this semester.

“The transparency is just opaque at this point,” Senator Hattie Charney said. “People have to realize that what they’re saying is going to be taken down. They need to realize that they are still a public figure and what is said will be recorded. You can’t go back later and say ‘this will hurt someone’s feelings, let’s just redact it.’ That’s not how anything works.”

Incomplete meeting minutes have also surfaced as a concern for those not previously allowed to attend executive cabinet meetings. In minutes released last weekend, meetings would run for nearly an hour and a half at times, with records kept in only 2-3 pages. For contrast, finance committees’ full minutes for a 40 minute meeting were about the same length. That would leave nearly half the meeting unaccounted for.

“That’s one thing we’re trying to learn as we’re going,” President Kaylee Kearns said. “Sophie is only a freshman and has only been in this job at the beginning of this semester. She’s learning to listen to the conversation and take minutes, as well as modeling off of what Hannah [Steiner, former USG recording secretary] did – summarize as briefly as you can and get direct quotes when necessary.”

Errors have also come to light regarding legislative body meeting minutes that were approved for archiving.

“There was a meeting where minutes were up for approval with over a dozen inaccuracies. Senator Lake brought this to the attention of legislative body and suggested that they should be fixed and brought back at a later date,” Berlin said.

“In my mind, I thought it wasn’t the quality or standards to file in an archive, so I moved to postpone the minutes,” Lake said. “The vice-president questioned my motion, but her job is to chair the meeting and remain impartial.”

The emails were brought up during Monday’s legislative body meeting, where there were disagreements among senators as to the importance of open executive meetings.

Kearns also offered a reasoning for closing meetings outside of individual privacy.

“One thing I thought about when we were sitting in this meeting was that this Sunshine Act doesn’t involve things we talk about regarding Point Park confidentiality,” Kearns said. “There’s stuff that comes down to us through the administration that we talk about that in executive cabinet and how we are going to present it to the student body that can’t be public yet. It still has to be kept confidential until the university announces it.”

Former senators – now members of the student body – have weighed in on the issue of transparency with the current executive cabinet.

“There are things in the constitution that they haven’t followed in years,” Former Senator Montana Gabriele said. “But there are some things in there that they need to stick to, like making sure everything is documented – that should always happen. There shouldn’t be secret meetings between anybody – I don’t agree with that.”

Former Senator Emily Harnett could see the importance of both sides of the argument.

“There’s always room for improving transparency, but I never felt that I was actively not being told certain things or actively being pushed away,” Harnett said. “They do have the obligation of doing the best they can to follow the constitution. That being said, I don’t think the constitution is perfect and there could be improvements. But if we are focusing so much on words we are ignoring so many issues students have on this campus.”

Lake mentioned the importance of bringing these kinds of grievances to public forum.

“To even have the aura of representation, there needs to be disagreement, especially in public,” Lake said. “In training sessions at the start of the semester, we talked about ways to work out disagreements before meetings, behind closed doors. That sounds all well and good except for the fact that we are accountable to constituents.”

Kearns did express regrets that the issue wasn’t addressed earlier.

“Mat brought forward the resolution and I feel like that needed to be more of a conversation first in understanding where the executive cabinet was coming from,” Kearns said.

But Johnson said he did bring concerns to executive cabinet before the resolutions were even drafted.

Arp did say the concerns were heard and the executive cabinet will work toward a solution.

“Moving forward after the meeting, I think we have a lot to learn and a lot to reflect on,” Arp said. “Obviously we are trying a compromise that the executive cabinet came up with for our meetings but we are open to what the senators have to say in trying to implement their ideas too, especially in regards to executive cab meetings.”

Johnson said he did believe in the institution and the organization moving forward.

“This has been the most active USG in years and so I think things are going to get fixed,” Johnson said. “It’s moving in the right direction. It has been continuously said that change takes time. Change only takes as much time as you allow it to. Change takes effort.”