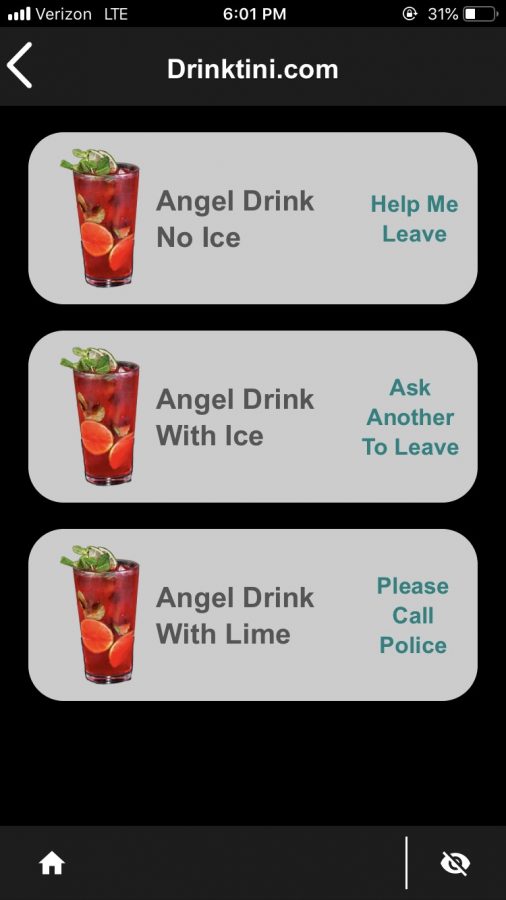 An example of one of the options uSafeUS provides for students who need to leave a potentially dangerous situation. “Angel Drink” allows someone to discreetly communicate with a bartender.

New to the fall 2019 semester, students can now download uSafeUS to their smartphones to find digital resources and tools typically found on handouts and pamphlets in the university’s Title IX office.

Director of Title IX and Diversity Vanessa Love described the inspiration to adopt the app.

“I’ve been searching for an app since I came here because I wanted to find something where students would access Title IX on their phone or something quick, because a lot of times students don’t want to come to my office, and they don’t read the policy online,” Love said. “So, I was thinking, how can they get the information without coming to me?”

uSafeUS offers information as well as interactive features for students to utilize.

“When I found this app…I knew that that was something that was needed here, because a lot of the students came to me and said that they would be in uncomfortable situations, like conversations, but they wanted to be polite,” Love said. “I knew that that was a perfect way to create a distraction when you don’t have someone there to do it for you.”

“You never know when you might need it in a situation where you’re not comfortable to tell the person, ‘hey, I have to go,’” senior Marissa Johnson said. Johnson has not used uSafeUS, but said she would be interested.

On the left side of the home page, students have four interactive options to avoid or to get out of uncomfortable or potentially dangerous situations.

“Time to Leave” triggers a fake call or text message from a contact of the user’s choice.

“So far, that’s the most used portion,” Love said.

“Expect Me” allows users to choose up to three people to track your GPS location while walking to a new location.

“A lot of students have said that they don’t feel safe going [out] at night in downtown,” Love said. “That’s one of the measures to make them feel a little bit more safer so that they can give someone the ability to watch them go from one location to another location.”

“Sound the Alarm” causes the phone’s flashlight to strobe, and a loud alarm will turn on.

The “Angel Drink” feature lists real drink recipes such as a lime drop martini or blue crush mojito, but hidden in the recipes is three versions of the Angel Drink recipe. In lieu of ingredients, the Angel Drink “recipe” provides steps for a bartender to take to help the user leave, ask another individual to leave or call the police.

The icons on the right side of the home page provide general information. “Find Help” provides campus, local and national resources. Specific resources for male survivors, the LGBTQ+ community and multicultural individuals is also available.

“We know that males are less likely to report incidences of sexual assault and sexual harassment, so it’s a good place for them to get the information without coming because they don’t come to the office,” Love said. “A lot of that is because of the ideas of masculinity, so they don’t report when something happens to them. So, we have very, very little reports of males, but we know that it’s happening based on statistics.”

“Helpful Answers” allows the user to find answers about sexual assault, stalking and dating violence. “What Next?” serves as a step-by-step guide on finding medical attention, reporting to officials, moving forward, finding support and practicing self-care.

“So a lot of times, students specifically, they’re like ‘something happened, but I don’t know that it was sexual assault,’ so they can go through here and look and see what happened to them,” Love said.

No matter what feature the user is using, they can hide the app from the individual or party they are with by tapping the eye icon in the bottom right corner. The screen will switch from the uSafeUS app to The Weather Channel.

Registered students can also receive notifications from the university’s Title IX office through the app.

Love used a grant from Futures Without Violence through the Office of Women’s Health to fund the purchase of the app subscription for the student body. Students are able to use uSafeUS for the next three years free of charge.

“What I hear from students, especially freshmen, is that, ‘I don’t want to have that conversation,’ so this kind of gets you out of having a conversation,” Love said. “And a lot of times, especially when we’re talking about sexual assault or lack of consent, they fight, flight or freeze. They freeze, they don’t have the conversation. So, if we can give you something that can kind of stop you from freezing, and kind of prevent that from happening, then we should do that.”

Roughly 90 students are using the app, according to Love, after it was discussed in the freshman and transfer orientation sessions. Love is planning promotional tactics to reach more of the student body.

“I think it sounds useful, and I’ll definitely look into downloading it,” Johnson said after a briefing on the app. “I think especially for campus safety and just have the resources, it’s a good thing for freshmen but also upperclassmen.”

Love hopes more students will download uSafeUS throughout the semester.

“It would never be mandatory, but ideally, we would like everyone to have the information…so when they need the information they can go there,” Love said. “I think it’s just a good way for students who will not come to the office who aren’t ready for that step to just get the information. And also, of course, the prevention side of things that prevents certain uncomfortable situations.”

While Love believes the prevention measures and interactive features are useful, she wants to ensure students know all the information is now at their fingertips.

“If my daughter were in college, I would want her to have it on her phone,” Love added.

In addition to uSafeUS, students are able to utilize the PointParkPD Tips app which was implemented in May of 2017.

Developed by tip411, the PointParkPD Tips app allows students to submit anonymous tips about crimes, drug use, bullying, hazing or other suspicious activity, according to a university press release. Point Park Police instantly receive the tips via text and email.