Women’s soccer falls to 1-6 ahead of RSC play 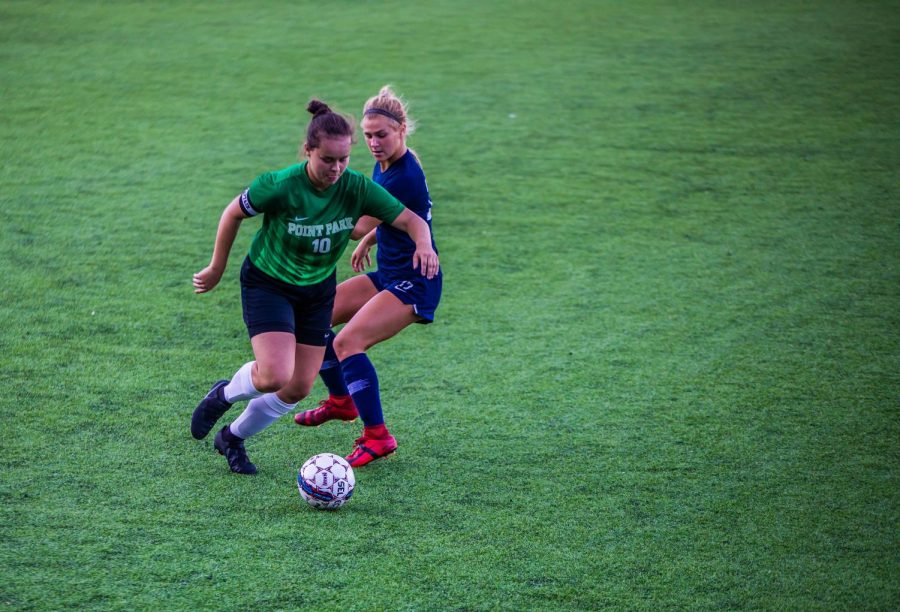 Senior captain Gabby Widman chases the ball around a defender against Shawnee State University at Highmark Stadium. The Pioneers lost the close matchup 2-1.

The women’s soccer team was unable to continue its winning streak, losing to both Shawnee State and Madonna University this past week.

Coming off of their first win of the season, the Pioneers came back home to Highmark Stadium to take on the Shawnee State Bears. The Bears were 2-3 going into their Tuesday night matchup with the Pioneers.

It did not take long for the action to get underway. Sophomore Tia Horew beat out a Shawnee defender in a race for the ball, firing a shot wide right in the 36th minute.

Just three minutes later, sophomore Emily Gillot battled with a defender for a bouncing ball at the top of the box, leading to Gillot attempting a shot on net. However, Gillot ran into the Bears’ goalkeeper, Hannah Bolender.

In the 32nd minute, sophomore forward Taylor Goldstrohm took her first of four shots, which led the team. Goldstrohm’s scoring chance was matched successfully by Shawnee State senior Jill Kelly, who scored two minutes later, beating Webb with a shot to the right of the box.

Almost 20 minutes later, the Bears attempted to increase their lead to two but Nikki Polens said otherwise. Webb tried to stop the ball however, and the ball bounced over the goalkeeper. A Bear’s forward went for the ball but Polens came into the box and battled for the ball, eventually kicking it out of harm’s way towards the stands.

Polens had seen her opportunity and decided to take it to try and keep Shawnee’s lead at one.

“When Shawnee State made it through and I had the chance to catch up to her, the only thing on my mind was not letting her score,” Polens said. “Winning the ball and feeling it connect with my foot was a great feeling, and being able to wrap my hips so I didn’t score on our own goal was another great feeling when you are running as fast as you can.”

This is Polens’ first season as a left back. The senior understands the role she plays in helping her goalkeeper, Webb.

“I think being in a new position as left back, it gives me a new perspective of the field,” Polens said. “As the back line, we are the last line that our keeper has, and I’m learning how important my role on the field is.”

Shawnee State kept pressing, taking a breakaway chance a minute late, only to be stopped by Webb. The remaining minutes dwindled down, and the Pioneers headed into the half down 1-0.

The Pioneers came out of the locker room seeming re-energized. In the 40th minute, Goldstrohm fended off two defenders but Bolender came out to scoop the ball up.

Horew was caught up on a breakaway two minutes later. Four minutes after that, Horew ran for another breakaway but was tripped in the process. The forward was awarded a penalty shot in which she capitalized on, tying the game at one.

After Goldstrohm fired a shot wide right in the 29th minute and Horew forced a turnover for an unsuccessful shot-on-goal two minutes later, the momentum seemed to be in the Pioneers’ favor. A Point Park goal seemed to be on its way. However, with 17 minutes left in the game, Shawnee State’s Eilidh Mchattie buried the eventual game-winner to the far right of the net after Webb tried to challenge the shooter.

The Pioneers kept trying to tie the game within the final minutes. Goldstrohm’s cross in the 15th minute was intercepted. Goldstrohm then had her closest chance of the game with under two minutes left. Her shot went just wide and the Pioneers’ offense never saw the offensive side of the pitch again.

Point Park fell to Shawnee State by a final of 2-1. Coach Bethanie Moreschi and her team had to switch their focus to Michigan once again, preparing for their date with Madonna University.

The Madonna Cougars, who were 4-1-1 heading into the matchup, set the tone early, outshooting the Pioneers 15-4 in the first half.

With under three minutes to go in the first half, Cougars’ freshman forward Mary Philimona scored on her second rebound to put Madonna in the lead going into the half.

The second half was dominated by the Cougars’ offense who fired 20 more shots towards the Pioneers’ net. Within the first nine minutes of the half, Grace Thomas and Megan Verant each scored their first of the game, giving Madonna a 3-0 advantage.

Four minutes later, Grace Thomas scored her second of the game. Moreschi had enough; Webb was pulled out of the game and replaced with Goldstrohm.

Madonna did the same damage, even with Goldstrohm in net. The Cougars kept scoring throughout the second half. Jenni Simmons scored once while Sierra Nissan scored back-to-back goals. Verant ended the scoring by tallying her second goal of the night.

Injuries played a big part in the Pioneers’ loss.

One of those injuries was defender Emily Gillot, who had previously helped lead the offense in the Shawnee State game.

Gillot’s injury goes back a few games, all the way to Washington Adventist.

“I tried to push through it and play against Shawnee State but my ankle was just too weak still,” Gillot said. “I took this week off to get ready for conference play starting this Thursday. We’re getting back a few injured players so hoping this will be the start of turning our season around.”

Madonna University was also getting votes for the National Association of Intercollegiate Athletics (NAIA) Top-25 poll, as voted on by the coaches.

Point Park returns to action against Indian University Kokomo. This will begin conference play for the Pioneers, who will play their next two home games at the Montour Junction Sports Complex.

The Pioneers next three opponents (IU Kokomo, IU East and Midway) are ranked in the top three of the River States Conference (RSC).

Point Park needs wins against these teams in order to gain ground in the RSC standings. The Pioneers currently rank No. 10 in the RSC.