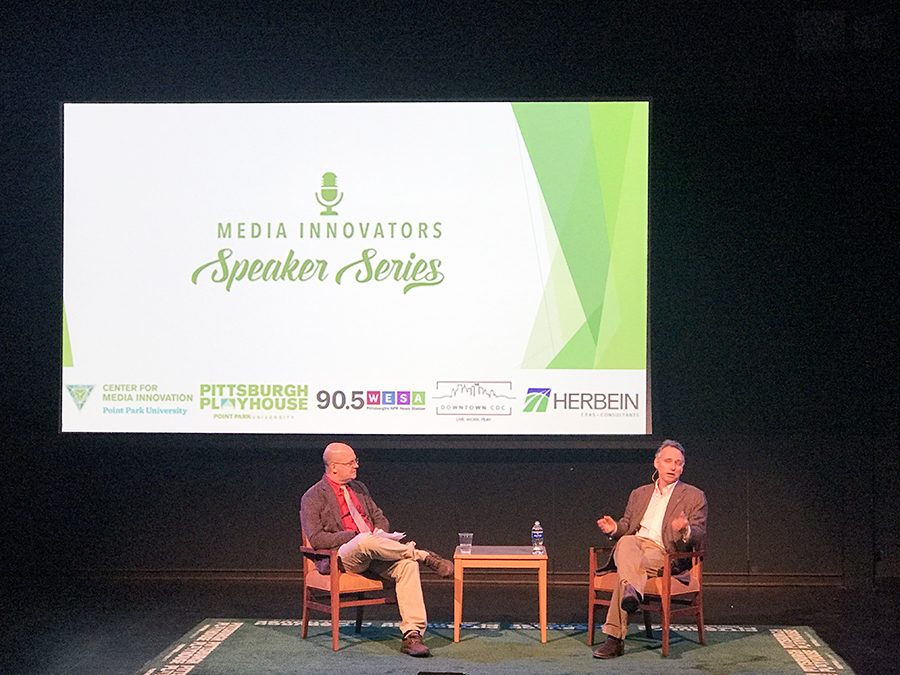 Quil Lawrence speaks on the Playhouse stage as a part of the ongoing Media Innovator Speaker Series.

Quil Lawrence is a National Public Radio (NPR) correspondent who covers veteran affairs around the world. On Oct. 17, as part of the Media Innovators Speaker Series, Lawrence visited the Pittsburgh Playhouse to talk to students and educators about his experience as a journalist.

Lawrence said he spent many years acting as a foreign correspondent in countries like Iraq and Afghanistan, but he felt like he wanted to do more.

“It just really started to occur to me that I had something in common with [the veterans], and I also wanted to understand what it’s going to be like for them to come home,” Lawrence said. “That was when I started bothering NPR to bring me home because there are all these reasons that we need to see what happens, and we need to make sure that America sort of makes good on its contract with people.”

Lawrence spoke about his experiences with different policies in place, and their unintended consequences when it came to veteran affairs.

“With the VA Mission, they decided they are going to slowly expand this to all veterans, but there are still a lot of problems,” Lawrence said. “One of the biggest problems that NPR has highlighted is that people will get kicked off the program with no explanation.”

According to Lawrence, the program was created by the government to help caregivers of veterans who are seriously injured. He went on to talk about Matt Andrews, a triple amputee who had recently been kicked out of the program.

“He’s been through every manner of human experience,” Lawrence said. “He’s been homeless while a triple amputee, he’s dealt with drug addiction and he was just kicked off the caregiver program because the VA said he hasn’t been making progress.”

Lawrence played a clip from one of his interviews in which Andrews talked about his struggles and his wife, Elizabeth, and mentions the hardships they had been through.

“I’m still going to care for him, even if they pay me or not,” Elizabeth said.

Another topic Lawrence talked about was the Green Alert Program. This program was implemented in Wisconsin, in an attempt to decrease veteran suicide rates, but Lawrence said it was met with controversy due to its invasive nature.

“They instituted a Green Alert, and, like an Amber Alert, it reaches people in the area through phones, radios and TV screens,” Lawrence said. “The program is meant to help find a veteran who cannot help themselves.”

Lawrence said the idea was good in theory, but after meeting a veteran who had been put on the alert, he began to understand the controversy.

“Your name and health conditions would be made public, and you know it could feel very violating,” Lawrence said. “You might not want everyone who doesn’t know me to know that I have problems.”

Lawrence finished the talk by telling the crowd lighthearted stories about the people he gets to meet every day. He mentioned that he feels blessed to have a job where he gets to interact with unique individuals on a daily basis.

“I get to have a lot of fun meeting really inspiring people,” Lawrence said. “Most of these guys are totally squared away and doing really well and have, you know, transitioned in whatever way they needed to.”

Maddy Sedberry, a sophomore SAEM major, attended the event to earn shadowing hours, but she said she ended up really enjoying the experience.

Zach Washington, a freshman SAEM major, said that Lawrence helped him become more aware of the struggles of veterans, something he hopes to share with others.

“This kind of helped inform me on a lot of things and now I’m more consciously aware of these issues and I always enjoy having an opportunity to learn,” Washington said.

Sedberry also mentioned she hopes to bring awareness of veteran affairs to her fellow peers.

“I think I’m gonna take the information and just you know talk about it with my peers and be like ‘Hey, I just saw this great speaker, and this is what we talked about,’” Sedberry said.