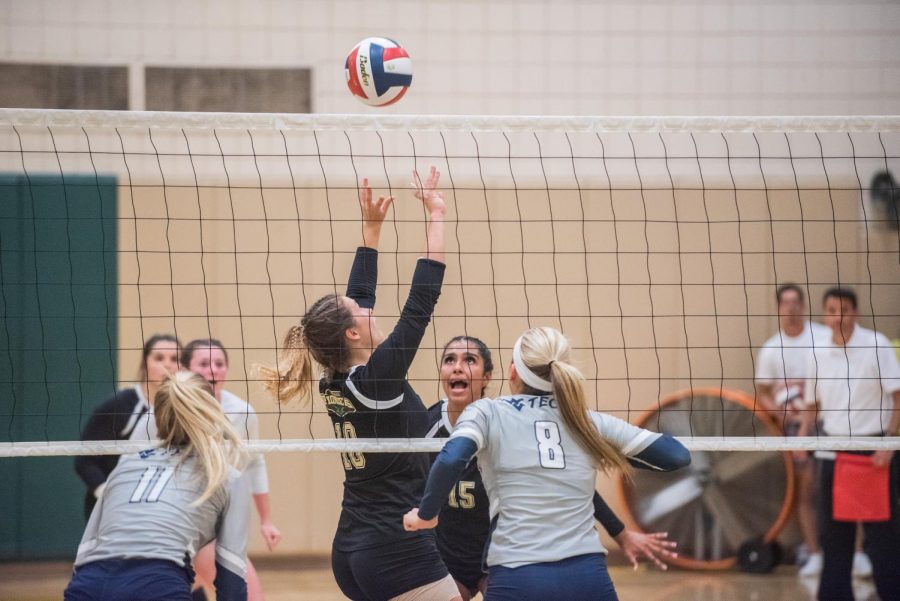 Senior setter Julia Menosky (left) sets up a kill for junior Jazlyn Rozier in a match against WVU Tech earlier this season. 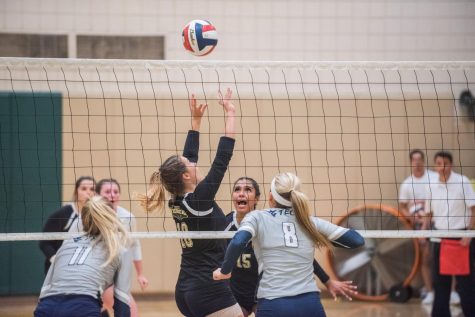 Photo by Nick KoehlerSenior setter Julia Menosky (left) sets up a kill for junior Jazlyn Rozier in a match against WVU Tech earlier this season.

Menosky reached the 1,000-career dig milestone, making her the eighth Pioneer and the only setter since the year 2000 to achieve the feat.

“I honestly had no idea I was even remotely close until Ashley, our libero, said I only had three more until I reached it,” Menosky said. “I had the record for most digs in high school until my brother beat my record but I never would have thought I would get it in college, especially since I’ve played a couple positions.”

Menosky reached this goal in Point Park’s Friday night road match-up against University of Rio Grande, the third contest between the teams this season resulting in a green and gold victory.

The setter snagged three digs to climb to exactly 1,000 digs in her near four-year career at the university. Menosky also dished out 25 assists.

“I’ve always loved defense, and I’m really happy that all the work I’ve put in the past four years is paying off, and I can leave my legacy here,” Menosky said.

This would be the only match of the week the Pioneers would win.

The Pioneers hosted the Mountain Cats last Tuesday in their first home game in nearly a month.

Last season, the NCAA Division II team swept Point Park, and the Pioneers put up a five-set fight against the Mountain Cats in the 2017 season resulting in a loss as well.

After rallying the first three sets, Point Park was up 10-0 in the fourth when Pitt-Johnstown kicked into high gear and never looked back.

“Looking back against UPJ, we should’ve capitalized on their mistakes and stayed more consistent with serve receive,” English said.

Although the Mountain Cats posted the highest numbers on the scoreboard, the Pioneers tallied solid numbers across the stat sheet.

English and Ferragonio led the offense with 13 kills each and ended with double-doubles with 16 and 17 digs, respectively.

Also finishing with double-doubles were the setters, Brittney Bianco and Menosky, with 20 assists and 14 digs and 22 assists and 11 digs, respectively.

Castelli led defense in the back row with 24 digs. Rozier played big at the net to post five blocks, and sophomore Madison Sima and freshman Taylor Small put up three each to help defense at the net.

On Saturday, the Pioneers suffered their second loss of the week against West Virginia Tech.

The teams played two times previously this season, once at the Emileigh Cooper Memorial Classic and again in late September at home. The first match-up was a five-set win for the Pioneers, and the second Point Park victory wrapped up in four sets.

The Pioneers and Golden Bears dropped this match down to three sets, but the win went to WVU Tech.

“We went in and just let some things get past us,” Small said. “This game was no different [than the last two]. We just need to regain a strong mentality and work through the little things.”

“We needed to pick up our defense and put the ball away when it mattered most,” English said.

No Pioneer reached double digits on the attack, but Sima tied Small for the lead with nine kills apiece, and Sima added three blocks.

Castelli highlighted the back row with 10 digs and recorded three assists. Menosky and Bianco nearly split the match even with 16 and 17 assists, respectively.

The Pioneers, 17-8 overall and 7-4 River States Conference, have two more weekends of conference play at home before RSC playoffs begin. This weekend, Point Park will host Midway University and Asbury University, the first match-ups of the teams this season.

In the 2018 season, the Pioneers beat the former team in four and the latter in a sweep.

The last weekend consists of a rematch between Point Park and Indiana University East and Ohio Christian University, the first being the most important to the Pioneers as the two teams sit atop the RSC East.

“Since we are neck and neck with IU East, we’ve been taking it one game at a time,” Menosky said. “There are a couple big games for us coming up, especially the game against IU East, that we have to get prepared for and be focused on before we think about playoffs.”