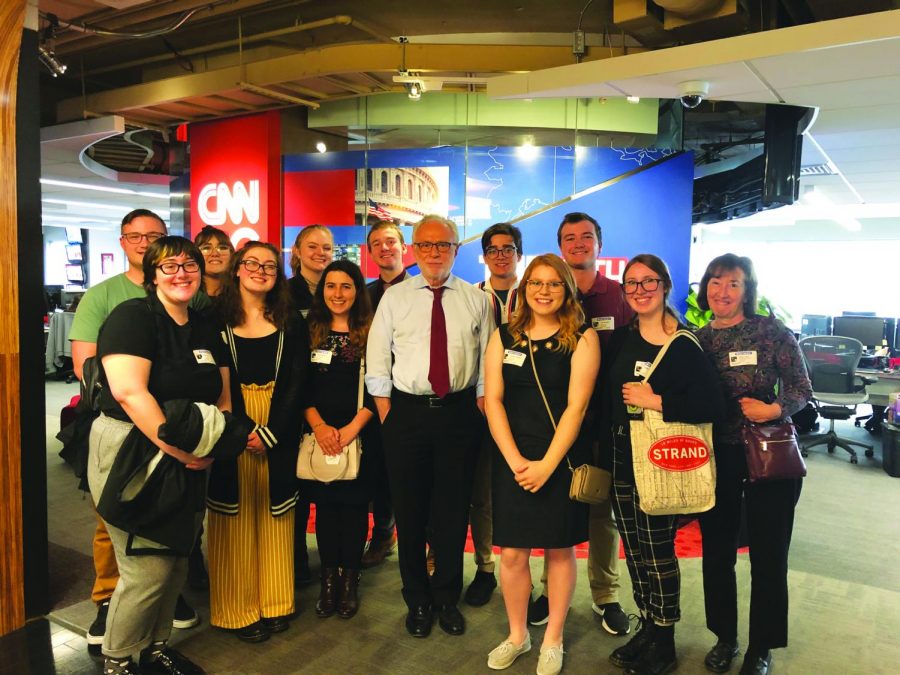 Wolf Blitzer of CNN’s “The Situation Room” poses with School of Communications students on the annual Washington D.C. Fall trip.

We got on the bus to Washington D.C. at 7 a.m.  The two of us, both freshman students in the School of Communication, looked like we were about to pass out from exhaustion.  We boarded the coach bus, which would prove to not have comfortable sleeping arrangements, and were off.

We arrived in front of the Newseum at noon. After a quick lunch, we entered into something, which at the time we did not realize, would be a surprisingly emotional experience.  Walking through the various exhibits, we saw things we didn’t expect to ever see, like pieces of the Berlin Wall, the Unabomber’s cabin and the Times Square Bomber’s car.

One of the exhibits included a wall of all of the documented deaths of journalists that were accompanied by a picture. The wall was filled to the top of the high ceiling. We found ourselves sitting here the longest. These men and women paid the ultimate sacrifice for their passion. Some were executed, killed in crossfire during gang shootouts or in a war zone. They all took their respective jobs knowing the risks involved, and they did all they could have done in attempts to deliver truthful and pertinent news to the masses.

This exhibit in particular, reminded us of why we want to be journalists and work in this field. It certainly isn’t for the money, nor is it for any sort of fame. It is for these brave men and women, and the truth they wanted to spread. We have never had a museum exhibit affect us like this one did. They are some of the bravest people we will ever have the honor of sharing a title with.

This visit solidified what we want to do for the rest of our lives. We want to carry on their legacy to the best of our ability. If we had any doubts about what we strive to do in the future, they are gone now.

Later in the evening, we went to a mixer with Point Park alumni who worked in the area.  After talking to people for a few hours over drinks and finger food, we were free to explore D.C. for the rest of the night.  We visited several locations, such as the Washington Monument, the Treasury Department, and Donald Trump’s house.

The next day, we were able to attend two places that, had we not gone with the school, would not have been able to attend.  The first place we attended was the National Press Club, a place where journalists in D.C. can visit to write, drink at the bar or see a guest speaker. In the week leading up to our visit they had several presidential candidates speak, including Andrew Yang and Marianne Williamson.

We received a tour, provided by Bill McCarren, the Press Club’s Executive Director, and Daniel Moore, the current leader of the Pittsburgh Post-Gazette Washington Bureau.  McCarren said that the reason he loves the press club so much is that “you can go see Cory Booker… it’s not that easy, but here’s a place you know they’ll be.” Moore agreed with him, telling us that he loved “running into sources here.”

Next up on our list was, arguably, the coolest place we went, the Cable News Network (CNN) building.  Danny Allman, a Point Park Graduate who now works for CNN, gave us a tour around the four-floor office space from top to bottom. We were able to go into the Situation Room, which would’ve been the coolest part of the trip, if not for what happened while taking our group photo.

We were allowed one group photo in CNN, and we were instructed not to take any other photos. While taking our group photo, Danny had an idea. A minute later, and Wolf Blitzer was talking to us. He got a photo with our group, cracked a joke about how Mexico paid for the wall that had the Situation Room’s logo, and gave us some brief life advice.

That night, we rode electric Razor scooters around D.C. The problem with the scooters in D.C. was that there were so many different scooter companies in the D.C. area that you had to download a different app to use each company’s scooter. They simply weren’t practical.

The next morning, we checked out of the hotel and headed for the Supreme Court.  We were able to go into the courtroom where the cases are heard, the library where law clerks and Justices have access to centuries worth of law textbooks, and the gym that Ruth Bader Ginsburg lifts in. We were even able to shoot a few hoops on the basketball court, the highest court in the land.

Before heading back to Pittsburgh, we had one last stop to make: The Capital Area Food Bank. We sorted food that had been donated, and were given a tour of the facility by an absolutely delightful gentleman.  After that we hopped back on the bus and headed home.

Overall, the trip was an overwhelmingly positive experience.  Both of us would like to thank everyone involved, in particular Helen Fallon, who started the trip many years back and keeps making it possible for the School of Communication to go on trips.

DISCLOSURE: The writers of this piece used a specific type of journalism known as Gonzo journalism.