Grad student finishes tenure with The Globe, looks ahead to future in the sports industry 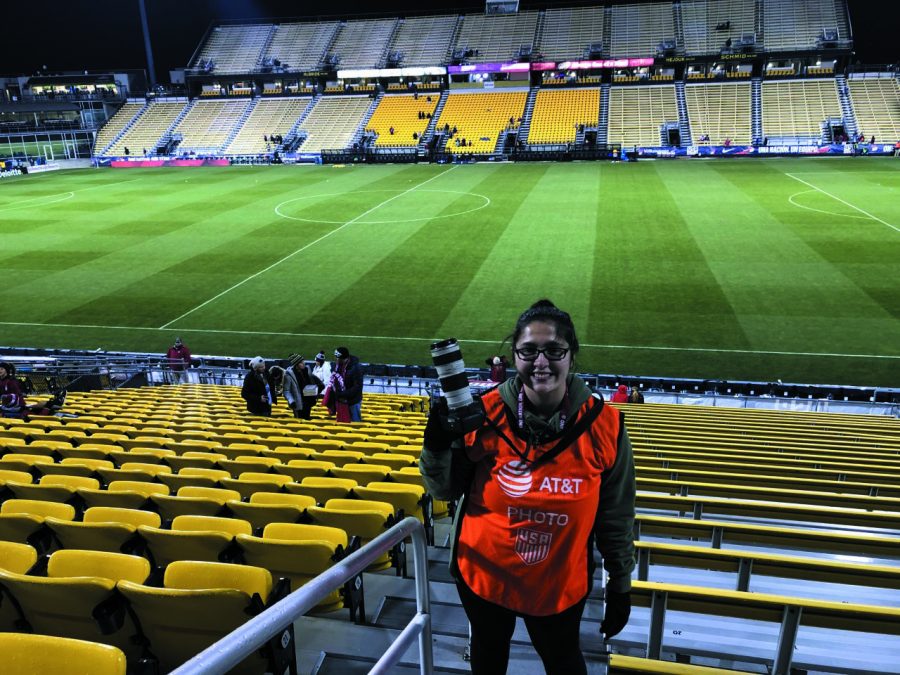 Graduate student Rachael McKriger has been a member of The Globe since rst coming to Point Park. McKriger is pictured above taking photos for the U.S. Women’s National soccer team in Columbus, Ohio.

After over a year at The Globe, graduate student Rachael McKriger will be leaving the student paper to focus on finishing her degree.

McKriger began writing for The Globe in her first semester of graduate school, last year.

“I was tasked to cover the women’s soccer team as my beat,” McKriger said. “I wanted to keep writing for a college newspaper when I got to graduate school. Back in my undergrad studies at California Univ. of Pennsylvania, I was the editor-in-chief of the paper two out of my three years in college. So, going back to being a writer was a cool experience.”

For McKriger, getting into journalism was originally a diversion from the typical subjects in high school.

“I’m not good at math. I hate science. I loved writing and I loved history in school. Then I discovered sports journalism and it was like a whole new world was open,” McKriger said. “A lot of kids don’t know what they’re going to do with their lives in their junior and senior years of high school, but I was cemented in being a journalist.”

McKriger decided to become a graduate student in order to pursue her dream job.

“Eventually, I want to work as the communication director for a club in the NWSL or MLS,” McKriger said. “Plus, to be completely frank, I would have never gone back if I didn’t go immediately after graduating from Cal U.”

Before she joined The Globe, McKriger’s expectations were raised for Point Park’s student run newspaper.

“Everyone was so nice and welcoming when I got here and I made really fast friendships with Allison Schubert and Dara Collins, two people I worked with closely since they were sports editors,” McKriger said.

Gracey Evans, who graduated last year from undergrad, met McKriger at Point Park’s orientation, which McKriger attended as she almost initially chose Point Park to pursue her undergrad degree. Evans was the biggest influence on McKriger’s decision to join The Globe.

Balancing being a grad student, writing for The Globe, and working other jobs has been a challenge for McKriger.

“There are times where it can be completely overwhelming,” McKriger said. “Add in the fact that I’m working a full-time job at DICK’S and I coach basketball two-to-three days a week, and it’s a lot to deal with. Having a calendar is the best thing that I could ever have to keep me sane. It’s all about finding time, too, to decompress.

Her family also plays a big role in helping McKriger maintain her composure.

“I live with my parents still — and note, don’t be in such a hurry to move out, kids. Living with your folks has major perks and I’m glad mine like me enough to keep me around,” McKriger said. “So spending time with them helps relieve any stress. I’m still working on how to keep everything balanced. To be honest, I don’t think my life, with the 10 million things I’m constantly doing, will ever be balanced.”

After leaving The Globe, McKriger will be focusing on graduating, then she will have to make a decision for her career, or potential careers.

“Right now, my journey is in God’s hands,” McKriger said. “I want to work in the NWSL or MLS after graduation, but at the same time, if the better choice is for me to stay at DICK’S for the time being, I’m completely OK with that. I work with a great team. I work at a great company with a lot of respect for its workers. I’m really content where I’m at now, but obviously I want that dream job down the road.”

McKriger does have advice for anyone looking to make a life out of journalism.

“You have to join The Globe,” McKriger said. “When I was at Cal U, I had a wonderful adviser who sat me down and said, ‘Listen, if you’re in journalism, you’re going to write for the newspaper.’ He was surprised when I told him, ‘Yeah, hey, already doing that.’ But you have to if you want a career. Getting good grades is great and all, but you need clippings.”

Patience is also important, according to McKriger.

“Like I said, journalism isn’t my full-time job. It’s a lot of different part-time jobs,” McKriger said. “Your dream job isn’t falling into your lap, no matter where you go to school or what student publication you write for. You need to work. You need to put in long hours. Sometimes, you might even need to do some unpaid writing to get your name out there. Just remember that if you work hard, you will reap the reward.”