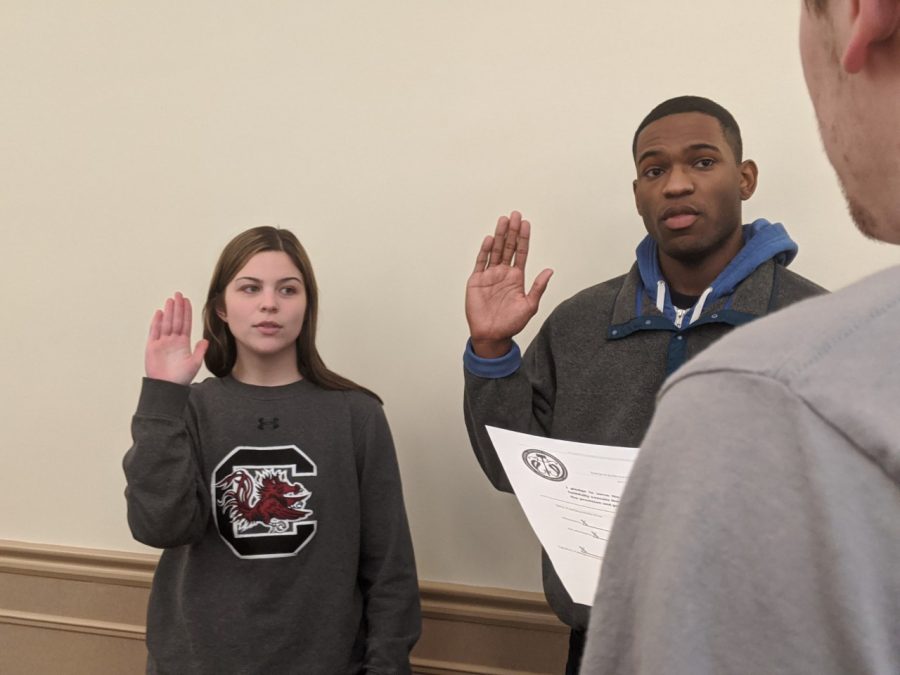 Lillian Hinckley (left) of the School of Arts and Sciences and Chris Blount (right) of COPA are sworn in as senators at Monday's SGA meeting.

The Student Government Association (SGA) of Point Park University discussed Spring I funding at their meeting on January 27th, 2020. After the funding period closed last week, SGA decided to allocate $14,051.68 to different Point Park clubs and $10,200 to the internal SGA budget.

Some concern was addressed after announcing the amount that each club would get. SAEM club was asking for a considerable amount of money for an upcoming Drake Bell concert.

“I was under the impression that there was a concern with the SAEM club allocation, specifically the fact that we are funding a Drake Bell concert, which sold tickets before that money was allocated, and now put the burden on us to foot the bill,” President Jake Berlin said on the matter.

Senator Hattie Charney explained that part of the issue with the concert was that students would not only be paying for the concert via their student activity fee should SGA fund it, but were also being expected to pay for tickets. Senator Charney noted that in previous years, SGA has agreed to help foot the bill for concerts, so long as students weren’t charged. Communications Director Detorre made sure to mention that this concert is not going to be in the Playhouse, where students are normally expected to pay for tickets, but in the Lawrence Hall Ballroom.

It was explained by Vice President Frank-Rempel that the reason students were being asked to pay is because of incidentals, such as a possible situation where Drake Bell could not show up or perform, and SGA refuses to pay for incidental fees with funding.

After this discussion, a friendly amendment was made to revoke the money that SGA was originally going to allocate for the Drake Bell concert. The motion passed.

During cabinet reports, President Berlin reported that after meeting with Student Affairs and Enrollment committee, he finally came to an agreement with the registrar so students can be notified in advance when their courses are rescheduled or cancelled, as well as whenever course offerings are locked in for upcoming semesters.

Kari Dettorre, the Communications Director, also announced that SGA now has a TikTok account, and it can be found @sgappu.

SGA also appointed two members during Monday’s meeting. Chris Blount, from COPA, and Lily Hinkley, from the School of Arts and Sciences. After the two explained why they wanted to be in SGA, the motion to swear them in passed without dissent.

During the second open floor, President Pro-Tempore Bryce Hayzlett announced that only about 50% of senators had sent him their office hours, and he requested that senators at the very least wear the SGA polos as specified in the SGA dress code. Parliamentarian Wrzosek agreed and added that SGA had been relaxed regarding office hours and attendance in committee meetings. Recording Secretary Jordyn Hronec added that the legislative body meeting was one senator away from not reaching quorum. Senator McDermott reminded the senators that this was a censureable offense, and while he’s the “last person” who would want to censure someone, he would have to start if attendance did not improve.

To end the meeting, Vice President Frank-Rempel announced that it was the anniversary of the liberation of Auschwitz and Holocaust Remembrance Day. Because of this, she requested a moment of silence in honor of the victims involved in the Holocaust. This concluded the meeting.