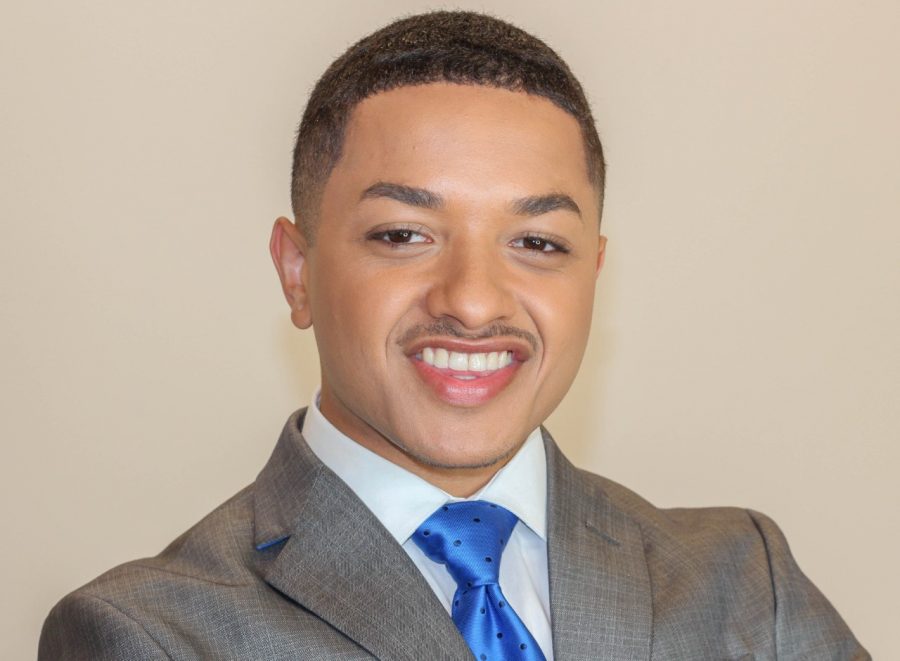 When he was in grade school, the first destination on Royce Jones’ mind was his grandmother’s house in New Kensington. There, he would sit with his grandmother and mother at the kitchen table, watching the different talk-shows and broadcasts.

He chuckled before recalling a specific memory from this childhood ritual.

In particular, Jones was fascinated by journalist Vince Sims reporting and anchoring the evening news for WXPI. Jones said that as a black man, he saw a part of himself in Sims.

“I used to just gawk at him on the screen because I thought it was really cool…it was almost like I was looking at myself in an older manifestation, talking back at me,” Jones said.

Jones has made his young aspirations to be on-camera turn into a reality. Jones currently works as a freelance reporter at KDKA on the weekends and has more than two years of experience reporting and anchoring for two local television stations. And, he does all of this while still finishing his studies as a senior broadcast major at Point Park.

However, he didn’t always imagine a career in broadcast for himself.

“So I really went back and forth for a lot of years about what did I want to do because I cannot invest my time into something that I’m not fulfilled with,” Jones said. “Because if I’m passionate about something, especially whenever it comes to work, I’m going to fully put the pedal to the metal and give it all I got.

Being “spiritually fulfilled” with his work was a priority for his career, and he got an extremely early start to the work world.

Jones began washing dishes at a family friend’s restaurant when he was 12 years old. From there, he worked at a McDonald’s when he was 15 and then jumped into various jobs with retail fashion just a year later. An avid shopper, Jones used his charismatic charm to secure managerial positions at clothing stores right up until the summer of senior year at Point Park.

While working with customers, he discovered his talent as a people-person. Due to this interest and his love of family, Jones decided to abandon a potential gig in modeling and acting in New York City after graduating high school and instead attended Westmoreland County Community College as a marketing major for a semester.

After deciding that was not the path for him, Jones came to Point Park as a transfer student in the spring semester, wanting to pursue radio. But, he was quickly swayed to switching to a career in TV after everyone involved in radio told him that he was meant for TV. Knowing it was a competitive industry, Jones dove right in, researching on how to get ahead and secure himself multiple internships and a job offer before he walked on the stage for graduation.

“When I’m doing that research, I was reading their bios, I’m seeing where these reporters came from, what experiences they had,” Jones said. “Are there any organizations that they’re members of that I should be in? What are they doing that I need to do so that I can have their job?”

It was during his research that he stumbled across the Emma Bowen Foundation, a nonprofit organization that places students of color with apprenticeships. The apprenticeships allow the students to work in communications with major local and national stations, free of charge to the students.

After a rigorous interview process, Jones had a four-year internship in place with KDKA where he would work full-time during summers. Every day, he would shoot a few stories and write them up for the reporters or the anchors. As an intern, he himself was never been shown on-camera, despite collecting the necessary information for a multitude of stories. After a little over a year interning at KDKA, Jones felt that he needed a new experience to expand on his knowledge of the industry.

“You got to crawl before you walk, you got to walk before you run, but I think that’s definitely just the nature of it. I mean, you’re going to do a lot of other people’s work,” Jones said. “It’s just what you got to do. You got to pay your dues, and at that point in time I’m like ‘I think I paid mine’. I think my dues have been paid in full.”

When he discovered there were no on-air opportunities at KDKA at the time, Jones decided to cast his net elsewhere. He was surprised after emailing the news director at WTRF, a news station in West Virginia, that they wanted to hire him on as a reporter and anchor. With that development, Jones became an alumni of the Emma Bowden Foundation and left KDKA, although even back then he insisted he’d be coming back.

“It was just what I needed,” Jones said, reflecting on when he was first hired by WTRF. “It’s one thing to come be an intern and help out, but to put me on-air is like I’m just a kid at that point. That’s a huge risk. But I was, I’m not even gonna lie, I was really sharp. I knew what I was doing.”

The schedule was unrelenting. Jones would attend class Mondays through Thursdays and would drive to West Virginia on Fridays, Saturdays and Sundays, working in the afternoons and evenings. While anchoring was an experience he enjoyed, Jones said that he would always prefer reporting. The stories he was able to report on there covered a whole range of topics.

“I’ve had two presidential visits [stories], [and] I flew in a Black Hawk military helicopter when the army national guard got their new ones I flew in them,” Jones said. “I love covering a good protest. Just like the energy of the crowd, and there’s so much action going on, and it’s totally made for my brain because your head is constantly in a swiveling motion. There’s just a large sense of awareness that you have to have whenever you’re covering things like that.”

Some stories, he has learned, are less intense on the action and have required more sensitivity. One instance of this was when he interviewed students from Stoneman Douglas High School in Parkland, Florida at a convention.

“It was one of the most emotional stories I think I’ve ever had to cover, but it was also one of the greatest ones because it really made you have to stop,” Jones said. “Granted this was like years after the shooting happened but talking to them and hearing their stories, it was like wow. You feel so disconnected from these events that happen because they don’t happen where you are or you might not be involved, but that story really grounded me in a way.”

Truly, Jones was not expecting to leave WTRF when he did. At the same time, Jones had not wanted to completely cut ties with KDKA. He had been working at WTRF for almost a year and a half when he emailed the current news director at KDKA, saying that he would be interested in coming back whenever they had a position open. What was originally a meeting turned into a successful job interview, and he was offered a freelance gig at the station.

“When I tell you I screamed, I jumped up so high. I’m 5’7, I probably could have hit my head on the ceiling, that’s how high I jumped up in the air like a little girl. I mean, I was so excited,”  Jones said.

Now finishing out his senior year at Point Park, Jones is working for KDKA, studies full-time and is doing his practicum with the Black Student Union (BSU) on campus as their communications person.

“My brain is almost handcrafted to handle a million responsibilities at one time…but it does have its downfalls because I do crash a lot,” Jones admitted with a laugh. “Honestly, I don’t think of it as a success in a way. It’s almost like just what I’m supposed to be doing.”

The path he has paved for himself in just four years still amazes him, he confessed. Whenever he walks up to the Gateway Center, he enters the doors and passes by a blue wall of portraits of the anchors and reporters who have earned their right to be prominently displayed.

“I’m walking past these images in the hallway and I’m like ‘oh my gosh, I’m here’!” Jones said. “It just reminds me wow ‘you found so hard to get here, and your picture is about to be on this wall. You’re with the big dogs now.’ That’s probably, if there is ever a time where I stop and say to myself ‘I’ve made it,’ that’s that moment.”

WHAT MAKES YOU A PIONEER: “I would say I am a pioneer because I am in constant production of myself. I’m always trying to see how I can improve, where I can improve.”