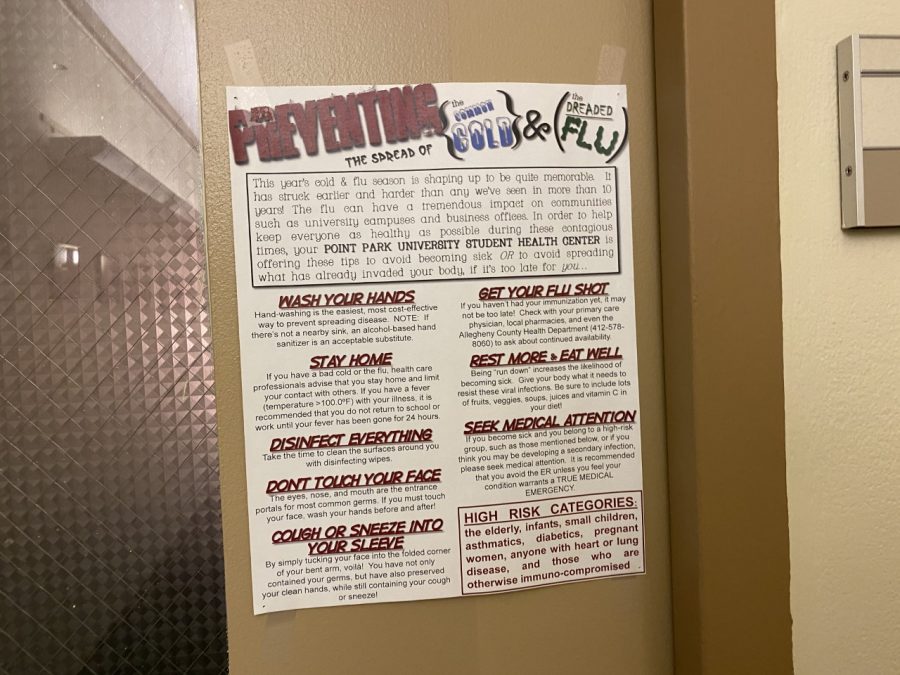 “Cold weather and your body being cold lowers your immune system, so there’s germs going around, and it’s easier to get sick in the cold,” Point Park University Nurse Lauren Hogan said. “Be mindful of infection prevention and the spread of germs.”

According to the Centers for Disease Control and Prevention (CDC), “flu season” peaks between December and February.

“If the flu starts going around somewhere like a college campus, it is a lot more likely than maybe somewhere else, that it’s going to get passed around,” Hogan said. “Because of the structuring of the classes and the closeness of the dorms and the lack of keeping things clean.”

CDC recommends flu vaccinations around the end of October, but it is beneficial to receive  the vaccinations when possible to lessen the chances of getting sick with the flu.

“It’s more beneficial for [a] higher risk population, which typically includes younger children, older adults [and] seniors,” Hogan said. “They’re more susceptible, and they tend to have complications of the flu, which is the biggest worry of getting the flu.”

Hogan said that flu vaccinations can be received from a doctor, a family doctor or other places that still offer them, such as CVS or Rite-Aid.

“But by this time, most people that want to get it have gotten it,” Hogan said. “I don’t think it should be forced on anyone.”

Hogan said that common mistakes students make include a lack caution involving of the spread of germs. She said that it is important for students to wash their hands, be mindful when sneezing and coughing and when touching their face and other people.

Hogan said that the close proximity between people in a college environment facilitates the spread of germs  and advises students to protect themselves and others from those germs, like wearing a face mask to class when actively sneezing and coughing.

Senior English literature major Lorie Simonian agrees with Hogan, stating that students need to take care of themselves and others to stay healthy.

“Be careful, get your flu shot and wash your hands,” Simonian said. “Try not to spend too much time with people that you know are sick.”

Simonian said that she attempts to stop the spread of germs with simple practices, such as coughing into her arm and washing her hands.

“I feel like it should be one of those things where it is second hand nature, where you should immediately upon instinct bring your arm up,” freshman journalism major James Barchetti said. “You don’t want to cough in someone’s face.”

“I just sanitize things on a regular rotation., always use hand sanitizer,” Hogan said. “Four or five times and then soap and water the next time.”

Moreover, Hogan said that whether students have received  the flu vaccinations or not, routine illness prevention practices are important to prevent students from getting sick.

“There are ways that if you get good at it, you’re much less likely to catch it,” Hogan said. “Don’t do things to spread it and try to avoid getting it.”