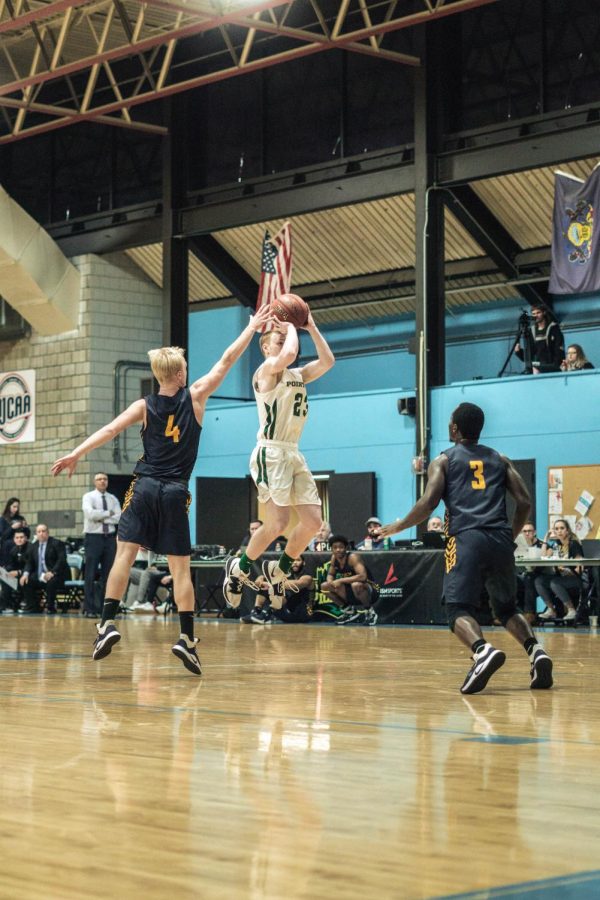 Junior guard Mark Shehady pulls up for a trey attempt while being closely guarded by WVU Tech defender Andreas Jonsson (4). Shehady had seven points in the RSC home match-up.

The men’s basketball team split their games once again this week, but were able to officially clinch a playoff spot in the River State Conference (RSC) tournament.

The men still stand in third place in the RSC East division, where they will presumably stay as they stand six games behind Indiana University East with two games left on the season.

In their first game of the week last Tuesday, Point Park was able to defeat the University of Rio Grande in Ohio, 74-70.

The Pioneers dominated the first half, leading by as much as 19 in the first twenty minutes and dropping 40 points compared to the RedStorm’s 22.

Point Park held the lead until the very end, but Rio Grande did not go down quietly, marching a major comeback and bringing it within three multiple times in the last 30 seconds of the game.

The Pioneers were able to buckle down in crunch time though, just keeping the RedStorm at arm’s length till the final buzzer sounded.

“I think the thing that kept us ahead was our game plan,” junior forward RJ Fairrow said. “We knew the key guys that we had to keep the ball away from, we did that and we were able to keep the lead at the end.”

This was another game where the Pioneers dominated the boards against their opponent, this time out-rebounding Rio Grande 42-29.

Point Park also out-shot the RedStorm 48-percent to 42-percent, although the Pioneers only shot 15-percent from beyond the arc compared to Rio Grande’s 45-percent.

Junior forward Garret McHenry led the way for the boys with 21 points and six rebounds, followed up by junior forward Kyle Carrington, who came up a rebound short of a double-double with 12 points and nine boards.

The win clinched one of the four postseason spots in the RSC East division.

“We knew going into that game that it was do or die; if we won we would make the playoffs, and if we lost it was over,” Fairrow said. “I think everyone on the team came locked in and we got the win. When we did, everyone was ecstatic.”

In the second game of the week, on Saturday, the Pioneers fell to the first-place WVU Tech Golden Bears, 79-65.

The game was a back and forth affair in the first half, with neither team being able to lead by more than five.

It was a rare game where the Pioneers were out-rebounded by their opponents, 42 to 26.

Despite being out-rebounded by the Golden Bears, the Pioneers were able to out-shoot WVU Tech 46-percent to 44-percent from the field, and heavily out-shot their opponent from deep, hitting 42-percent of their 3-pointers compared to WVU Tech’s 27-percent.

The Pioneers were led by the scoring efforts of sophomore guard Sherron Schifino, who put up a team high of 14 points. Three other Pioneers in junior forwards Adam Scott, Fairrow and McHenry all put up double-digit points as well with 12, ten and ten, respectively.

The men will be on the road this Tuesday to face off against Indiana University East in Richmond, Ind., who are the second-ranked team in the RSC East division.

The Pioneers’ final regular season game will be this Saturday at home, where they will face off against Ohio Christian University (OCU) in their Senior Day game at 3 p.m.

Point Park will need OCU to lose their first game this week, or defeat IU East and OCU at home to hold onto the third seed in the East division as playoffs loom large.