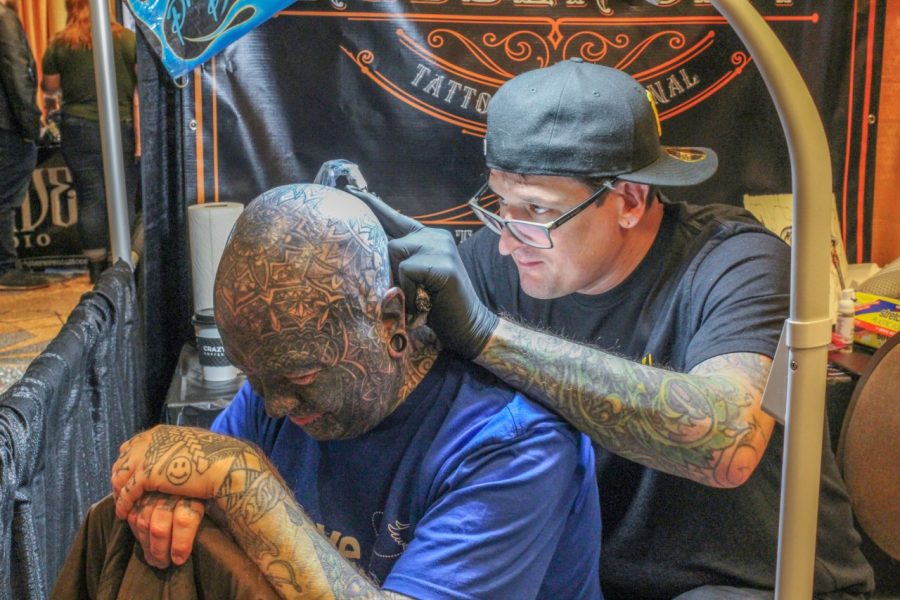 At the peak of any given day at the annual Bleed Black and Gold Pittsburgh Tattoo Expo, it’s difficult to walk through the aisles of artists and vendors without bumping body parts with the person walking across the walkway.

One can only hope they don’t bump a fresh tattoo.

The Pittsburgh Tattoo Expo returned to the Sheraton Pittsburgh Hotel for its fourth consecutive year last weekend, Mar. 6-8. The event featured 125 booths filled with the industry’s best artists and vendors.

Just a 10-15 minute walk across the Smithfield Street Bridge, Point Park students were able to take advantage of an opportunity to become immersed in the tattoo community.

Megan Clista, a junior public relations and advertising major, went to the expo on Saturday and received a forearm piece.

“I got my first tattoo in high school where it was somewhat taboo and definitely not the norm,” Clista said. “This was my first time at the expo, but I don’t think I’ve ever felt more accepted for loving tattoo culture than I did while I was there. The expo made me feel like I was part of a community.”

Attendees Maggie Woods and Hannah Guidosh mirrored Clista’s sentiments with their love for the tattoo community present at the expo.

“I only ever planned on getting one or two tattoos, and getting them hurt [badly], but while you’re getting tattooed, you’re thinking, ‘I cannot wait for the next tattoo.’ It’s a way to express yourself,” Woods said. “I actually feel so much better in my body. I have a lot of body issues and getting tattooed makes me love myself more.”

“I never really felt comfortable in my body, but the more I tattoo it, the better I feel,” Guidosh said. “I used to have an ex who would say your body is a temple, so you should treat it well, and no temple that you go to is stark white. It’s covered in art, and it’s beautiful, and people go there anyway. My body is my temple, and I’m going to cover it in art.”

Greg Piper, owner of Baller Inc. and Exposed Temptations Tattoo, realized the tattoo community made its appearance at the convention, and he now wants to target those outside of that community.

“People that are heavily into the tattoo scene, they come anyway,” Piper said. “We’re trying to include other people because I don’t think other people know what a tattoo convention is. They hear the commercial and think, ‘Oh, we’re going to go watch other people get tattooed,’ because we get so many calls from people who don’t even realize they can come here and get tattooed.”

Piper said the back-to-back Penguins games impacted attendance this year, but they maintained roughly the same numbers as last year.

Despite the lack of increase in attendance, Piper and his team are excited for significant changes to next year’s convention to boost turnout.

The Miss Pittsburgh Pin Up Contest will be moved to Friday night, and Saturday night will feature the first annual Pittsburgh Drag Competition.

“It’s going to be pretty badass,” Piper said. “We’re trying to do some different things to be more inclusive of different people.”

Piper also mentioned the increase of family friendly activities at the convention.

“All my meetings I’ve had with my staff, we’ve all concluded that we need more family-friendly things here,” Piper said. “We’re going to have face painting for kids and an airbrush artist that airbrushes kids up as well. Christian Buckingham from InkMaster is going to be here having a kids art camp next year.”

Next year, the expo will return on Valentine’s Day.