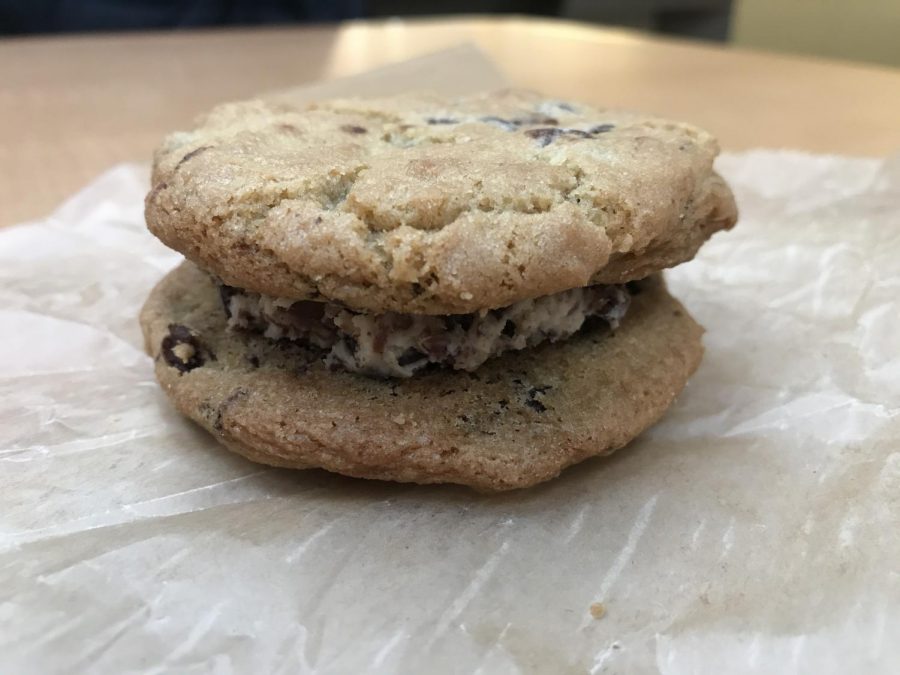 It can be easy as a student to fall into the rhythm of visiting the same fast-food restaurants in Market Square—Chipotle, Noodles and Company, Starbucks. However, if you’re looking for a change in pace, this hipster-esque cafe might just be for you.

Bluebird Kitchen is tucked in between the CVS Pharmacy and Dollar Bank on Forbes Avenue, marked by an unassuming sign of a small bluebird perched in a nest on the side of the building. The interior is of modern chic design, with hardwood floors and stylized chalkboards listing menu items. When I visited during the lunch rush, a whole crowd of people gathered in a slightly unorganized line, entertaining their eyes with the front display case of scrumptious-looking desserts.

I decided to try a bit of everything. Fair notice, if you do this, it’s going to be pricey. For drinks, I ordered a Cappuccino for $3.75 and European Style Drinking Chocolate for $5.25. There were three soups for the day, so I chose the Cauliflower Curry and Chicken and Quinoa soups. Each of those was $4.50. The cafe also provides a wide array of sandwiches, so I chose the House Roast Beef, priced at $9.50. Of course, I couldn’t pass up on trying the desserts, so I got an Orange Chamomile cupcake and a chocolate chip cookie dough cookie sandwich. Unfortunately, I’ve lost my receipt to the sands of time, so I can’t remember what exactly I paid for the two desserts but it was definitely upwards of $5.00.

Altogether, my total was upwards of $30.00, although I did order an insane amount of food that I ended up sharing with some friends.

The drinks are made by a barista, so the drinking chocolate is much better than if you pop a mug of Swiss Miss in the microwave. It can be made with either whole or skim milk, but I personally opted for whole milk, so that the drink would be as deliciously as unhealthy as possible. The chocolate drink, as a result, is so much more velvety than your average hot chocolate, making it taste as rich as a chocolate bar melting in your mouth. Again, though, it is nearly $6.00 for only 12 ounces. The cappuccino, in my opinion, was more fairly priced, and it was strong enough to get me through my hour and a half and three-hour classes of the day.

As for the soup, the Cauliflower Curry is a creamy soup and tastes unassuming at first, but it has a flavorful punch once you swallow. Whereas the Chicken and Quinoa was more broth-based like a chicken noodle soup and was pretty hearty, and it’s a good pick if you have a sore throat. Although, I should say at this time if you’re feeling ill, please stay at home until you feel better.

The House Roast Beef is made up of medium-rare beef, oven-dried tomatoes, thyme onion, arugula and horseradish aioli on ciabatta bread. However, the sandwich was not the most appealing for me personally. While the bread tasted very fresh, the tomatoes were very tart, and there was too much aioli on the sandwich for me to enjoy it.

The desserts were the highlight of the menu items I chose. The icing wasn’t too sweet, and it did not taste like the typical saturated taste of an American buttercream even with rock sugar and orange flakes on the top. It didn’t exactly stay on top of the cupcake though, so be careful when eating. The chamomile flavoring was in the icing while the orange was more pronounced in the cake. The actual cake was very moist and citrus-y. I am a traditionalist when it comes to food, so I preferred the chocolate chip cookie dough cookie sandwich, which was an edible cookie dough spread sandwiched in between two chocolate chip cookies. The cookies were crispy enough on the outside while being airy on the inside—exactly what I want out of a chocolate chip cookie. That would have been good enough on its own, but the cookie dough was like a satisfactory sweet icing. Essentially, it’s heaven for chocolate chip cookie lovers.

Overall, the selection I chose was a mix of some hits and misses. I would recommend trying their desserts and drinks…if you’re willing to fork over the money that is. I should note this visit happened two weeks ago and the Bluebird Kitchen did not respond to any calls about whether they are open for takeout or curbside delivery, so this may not be an option until the closures of businesses are lifted. If that is the case, this wouldn’t be a bad pick to put on your restaurant bucket list once the world returns to normal.