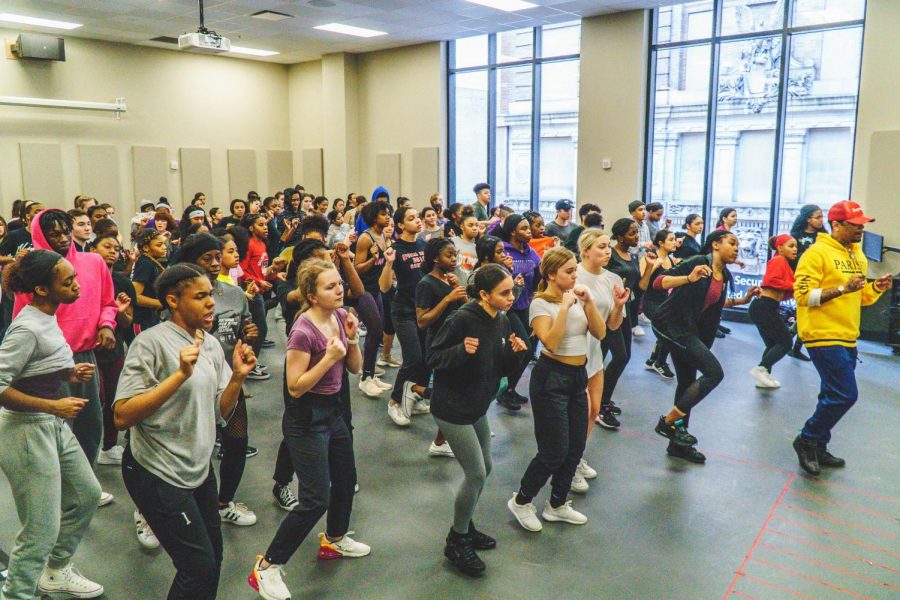 While class was not in session last week for spring break, dance students flocked to Pittsburgh to attend the National High School Dance Festival at Point Park.

Around 1,200 dance students were in Pittsburgh, specifically the George Rowland White Performance Center in Lawrence Hall, from Wednesday, Feb. 26 to Sunday, Mar. 1.

“High School dancers from around the world will come to Point Park to perform for the country’s top dance schools – including The Juilliard School, Joffrey Ballet School, the Boston Conservatory at Berklee and Butler University in the hopes of earning college scholarships,” a press release put out by the university said. “They will also take dance classes from top instructors, including Parsons Dance. It is the largest event of its kind.”

This is the third time that Point Park hosted the National High School Dance Festival, which occurs every two years. Students who attend also have the opportunity to be admitted to Point Park’s Conservatory of Performing Arts (COPA).

“They want somebody who has training in all three areas, because that’s what they’re going to be doing whenever they’re here anyway,” Nikki Casey, the assistant director of artistic recruitment in COPA, said. “They want to make sure that the students have a proficiency in every area. And they also want students to just have fun with the audition, that’s a big thing for the faculty because, if the students are completely pent up and nervous, it does not show who they are as a dancer in the audition. So, the more fun that the student has with it, the more likely they are to catch the faculty’s eye.”

“It’s great for students who are really interested in the school, because they have to come take classes in the studios, see the whole campus, experience the city, so it has a bigger impact I think versus just a regular campus visit, because you’re not getting all of that opportunity to see all the things and do all the things you’re going to do during the semester,” Casey said.

In addition to the high school dancers who attended the festival, several Point Park dancers stayed on campus over break to volunteer for the event.

“I worked with Sarah Cowing in the Conservatory, and we scheduled over 30 volunteers to help with the National High School Dance Festival,” Heidi Ward, the director of community and summer education at the university and volunteer coordinator for the National High School Dance Festival, said. “Every day ranged with different categories, whether it was a floor monitor, registration, desk attendance, so we made sure everyone was where they were supposed to be and had the instructions that they needed.”

“I think the dance festival is certainly a great opportunity for any high school student, because with the audition you’re open to not only schools but summer scholarships, which is really nice,” Aia McInnes, a sophomore dance major with a concentration in ballet and a volunteer for the dance festival, said. “And you see, being in this space all week, I mean, that’s fun. And meeting faculty.”

According to McInnes, her role as a volunteer included being a floor monitor, assisting in selling merchandise, doing Instagram takeovers, greeting attendees and answering questions. James Anthony, a senior dance major with a concentration in modern dance, also volunteered at the festival where he sold shirts, helped attendees find studios and helped attendees with their schedules.

“I definitely wish I had a program like this when I started dancing, and I started dancing really late, so I mean, I didn’t know too much about it,” Anthony said. “But I think it’s a great opportunity for you to see other schools and see the professors that are going to be there and the training and how it’s going to be, if you’re going to like it and if your body is going to fit it. And then for the school to actually see you and see if you’re going to fit the school, that’s always a great thing too.”

“The festival was a lot of fun and I know that our volunteers also had a really great time,” Ward said. “It’s a good opportunity to network and get to know their peers better, and I guess we’ll do it again in two years.”