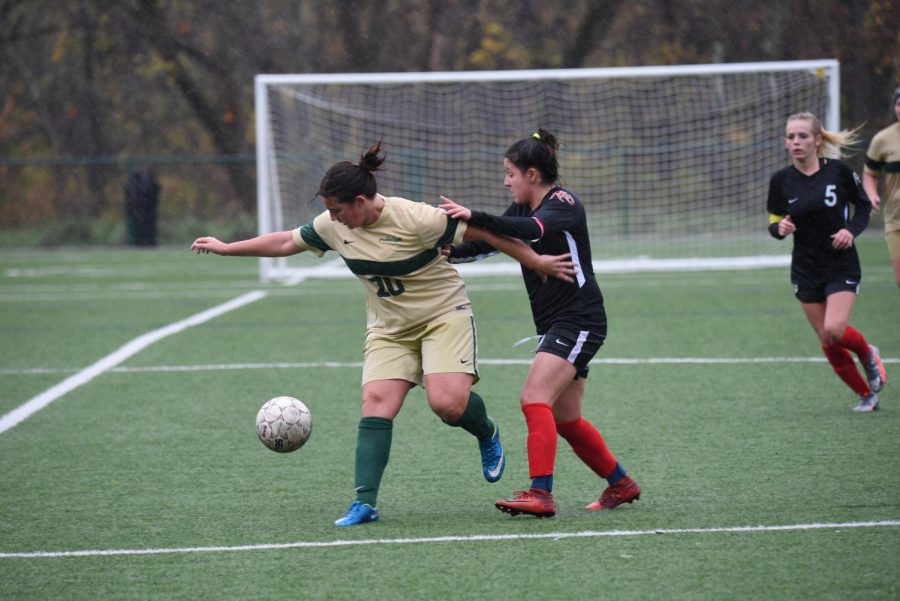 The women’s soccer team split their two games this week, defeating the University of Rio Grande Red Storm at home 2-0 and then losing to the Asbury University Eagles 2-0 at home on Senior Day while playing at Highmark stadium for the last time this season. The team now stands in second place in the River State Conference (RSC) standings, and stands only behind Indiana University-East who still have to play four more games this year.

The Pioneers were able to settle the Red Storm 2-0 at the Montour Junction Sports Complex on Thursday, Oct. 29. The game was a low offensive affair, with Rio Grande only taking eight shots (five on net) compared to the Pioneer’s seven shots (three on net). The Pioneers made their shots count though, as junior forward Taylor Goldstrohm scored the first goal of the game late in the 30-minute to put Point Park up late in the first half.

It wouldn’t be until late in the game that the Pioneers were able to put the game away in the 74th minute with a goal from freshman forward Shayna Augusma. Freshman Goalkeeper Ella Serlin was able to snag the shutout, after being named RSC Defensive player of the week only three days earlier, with this being her third shutout of the season as well.

Point Park was less fortunate in their second game of the week though, being defeated by Asbury University 2-0 at Highmark stadium on Halloween (Saturday, Oct. 31). It was senior day for the Pioneers, and even though many were not able to attend the game due to COVID-19 rules, parents were still able to stand with their daughters during the earlier presentation.

“It’s nice to be back at our home field, but it was nice to  be able to have fans at the Montour [Junction Sports Complex] field,” junior defender Emily Gillot said. “The closest anyone can get to seeing our games now is standing outside the fence, so I’d say that’s the only downside.”

It was an odd game for the Pioneers, only being able to record seven shots (two on net), under half of the Eagles’ 15 shots (six on goal), and only being able to land one shot during the first half. Asbury would score both of their goals in the second half, scoring at the 57th and 62th minute of the game.

The Pioneers still have one more regular season game to play this year, with a makeup match against Oakland City University in Oakland City, Indiana on Saturday, Nov. 14. The game comes from the Postponed match on Oct. 24. The game comes two weeks after what was supposed to be the Pioneers’ final game of the season.

“I think it will be good for us because we played a lot of games in a short period of time,” Goldstrohm said. “I know some of our bodies need some time to recover, and these two weeks will definitely help that. We have time to practice and work on a few things, so I think it’ll be okay.”

The playoffs are still currently up in the air according to the RSC, who has not given out much if any information currently about when they will be scheduled, as well as if there will be any modifications at all.