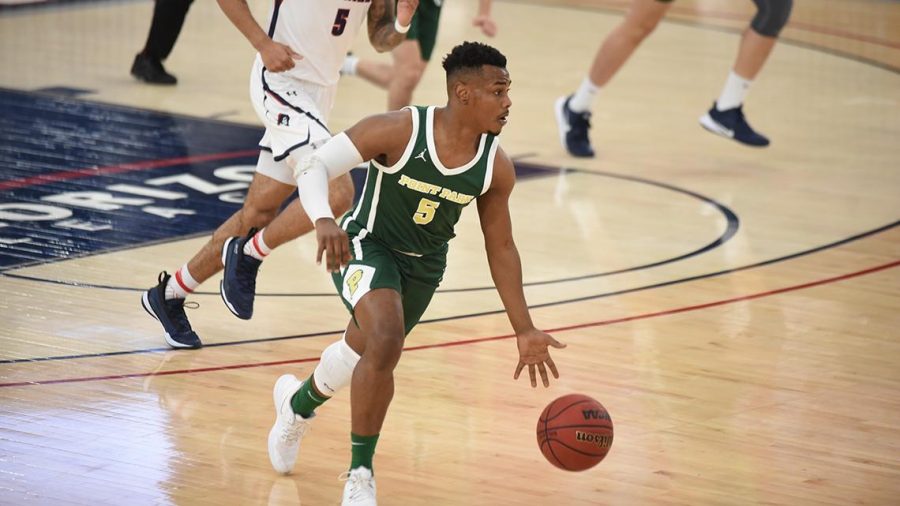 Even though the men’s basketball team lost both of their games this week, the team has nothing to be ashamed of. The Pioneers faced off against two Division-I teams on the road this week, going against the Kent State Golden Flashes on Wednesday, Dec. 2, and the Robert Morris Colonials on Saturday, Dec. 5, with the later of the two games being played on national television on ESPN 3.

The Pioneers first fell to the hands of the Golden Flashes, 90-41, at Kent State’s Memorial Athletic and Convocation Center, also known as the MACC. Point Park struggled shooting from the field, shooting 28% while only hitting on 19% of their three-pointers. Kent State would end up shooting well 46% from the field but also struggled from beyond the arc, hitting a measly 17% of their three’s. Sophomore guard Xavier Prince came off the bench to lead the Pioneers in scoring, putting up 10 points to pair with 3 rebounds and a block. Junior forward Kameron Shockley would be right behind him with 9 points, as well as 5 rebounds and led the team in steals with 2.

Point Park would also end up out rebounding RMU, bringing down 40 boards compared to the Colonials’ 38. Turnovers were the kryptonite for the Pioneers though, giving up 22 turnovers compared to RMU’s 11; half of what the Pioneers gave up. Junior guard Jesse Calloway led the way for the Pioneers in scoring with 10 points to pair with his 3 rebounds and an assist, as well hit all of his shots from the charity stripe. Shockley would be joined by freshman center Jagshaanbir Singh Jhawar in leading the way in rebounds, with both pulling down 5 a piece.

“It was a great experience, to be able to play two programs of that caliber and on that stage (on ESPN 3) in those great facilities was something that you always dream of as a player and as a team,” senior forward Garret McHenry said. “It’s what you work for.”

Several games this month and during November have been delayed and postponed due to a recent spike in COVID-19 cases across multiple universities in the River State Conference (RSC), in which the Pioneers belong too. Due to this, the team has had a lot of their games delayed and rescheduled, but it has helped give the team more time to practice and scrimmage one another for when they do play their first RSC game this season.

“It hasn’t affected us that much, as we still get to play everyday,” Shockley said. “We have a goal this year, and we are going to keep that in our sight no matter what happens this year.”

Point Park recently posted an update on their sports website, explaining that their RSC games will now be delayed until January of 2021, in hopes of COVID-19 cases decreasing until then as the semester comes to a close for most of the universities.

“Unfortunately, we have to postpone our upcoming River States Conference basketball games,” Director of Athletics John Ashaolu said. “With the rise in positive COVID cases, we as a conference need time to reassess our scheduling and protocols as it relates to the health and safety of our student-athletes. We look forward to playing these games in the near future and making a run for the conference championships.”

There have been no further updates as of publishing, though the Pioneers will continue to practice and scrimmage amongst themselves until updates are given out.