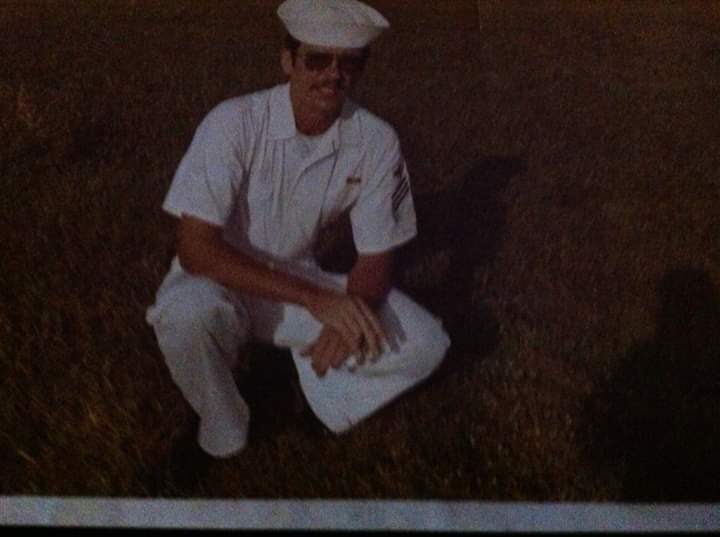 Petty Officer Donald Nemchick in uniform. Nemchick served in the U.S. Navy from 1970 to 1974.

Before the coronavirus pandemic, U.S. Navy veteran Donn Nemchick would contact his old war buddy who lives alone in Idaho only occasionally to wish him a Merry Christmas or to generally check in. Now, he’s talking to him nearly every day over the phone, sometimes multiple times a day, since the pandemic started.

Nemchick, 70, of Munhall, Pennsylvania, served in Vietnam with this man around 50 years ago. Since the coronavirus pandemic started, he and other veterans are trying to find ways to connect with friends, family and those who have served as COVID-19 and social isolation continues to pervade American society.

“One of the things I’m concerned about is loneliness with the veterans—[when] you die of loneliness, the head dies first, and then the body follows,” Nemchick said. “Your body might still be fit, but boy, your mind just plays the tricks on you. Sometimes you want to give up.”

While health experts encourage social distancing and isolation to mitigate the spread of COVID-19, older veterans say their mental well-being and ability to connect with others have been hit particularly hard by the restrictions, but some are finding ways to persevere.

Researchers have noted the special mental health impact COVID-19 has on veterans, especially for older former servicemen and servicewomen. In an article entitled “Aging Veterans’ Mental Health and Well-Being in the Context of COVID-19: The Importance of Social Ties During Physical Distancing,” researchers from Boston University and Adelphi University cited that conditions the pandemic has created—distancing from loved ones, references to COVID-19 as a global conflict, feelings of powerlessness coupled by age and constant confrontation with mortality—all may contribute to creating a combat-like environment and increasing veterans’ stress, particularly if they are experiencing unresolved PTSD from when they initially served.

“For most Vietnam veterans, we had a 13 or an 18-month tour of duty, so we had a date certain when all of this would be over for us. We don’t have that date certain for COVID, and what that does now is further aggravating or irritating an old scab, an old wound,” Nemchick said. “Is this ever going to end? Is isolation going to end? When am I going to be able to resume my normal social activities, see my family? When am I going to go to church again? All these types of things compound that situation, particularly with PTSD. It’s very common for veterans to now become more withdrawn. They don’t want to express themselves, and they don’t want to show weakness to their families or others.”

Nemchick is very much engaged with the veteran community. Currently, he works with the Riverside Center for Innovation as a Veterans Program Coordinator, helping to cut the “red tape” for veterans who want to become small business owners. He also attends activities run by the Veterans Breakfast Club (VBC), a local organization that has made it their mission since 2008 to listen to veterans’ stories and establish a social network among veterans.

While the pandemic has halted all of VBC’s in-person programming, the organization quickly shifted to holding virtual events for their clientele, which includes veterans and anyone interested in hearing their accounts. Using Zoom and sometimes Facebook and YouTube, the organization hosts storytelling and informational events on Sundays, Mondays and Wednesdays. Although there may be a technology barrier for older veterans wanting to connect, VBC is now able to reach people outside of Southwestern Pennsylvania, according to VBC staff.

“Something that the VBC has been trying to do since turning all of our programs virtual is keeping the connection going,” said VBC director of programming Shaun Hall. “We have World War I and World War II vets joining us from [different states]. So we’re extending this network beyond just Pittsburgh and being able to take more veterans together to be able to share time together.”

In a meeting hosted by the VBC, executive director Todd DePastino spoke to how acutely COVID-19 and the restrictions associated with mitigating its spread are affecting the veteran population.

“Here’s why I think this COVID-19 social isolation is a special problem with veterans: the chief benefit, virtue, value that you get out of military service is the camaraderie,” DePastino said. “That’s it. You make social connections with people that, in many cases, are far tighter and more important than your family connections. They are beyond friends. It’s a special kind of love and social bond and social network that you get from serving in the armed forces.”

According to DePastino, based on the first-hand accounts and research he has done over the years, maintaining those relationships among former servicemen and servicewomen are vital to the people who belong to those communities.

“In this environment, you lose those bonds. You can’t get the nurturing from those bonds, and you can’t get the benefit from them because you’re not around them as much as you really need to be,” DePastino said. “And I think that’s why veterans really miss it. Because that’s what veterans miss about serving in the military: the community, the bonds, the sense of purpose. And so I think it’s a special loss that veterans feel.”

At the Veterans Affairs (VA) Pittsburgh Healthcare System, providers are prioritizing the specific concerns regarding patients’ mental health during the pandemic, according to Bree Piper, a licensed clinical social worker, and Community Engagement & Partnership Coordinator from the VA Pittsburgh HCS’ behavioral health team.

“There are concerns about the effects that COVID-19 has brought on to our veterans, similar to the concerns of many patients across the country during this unprecedented time. However, VA Pittsburgh staff are well trained and versed in assessing mental health and are especially skilled in assessing the risk for suicide,” Piper said.

According to Piper, VAPHS staff have been utilizing telehealth models to care for patients and even offer face-to-face appointments when needed. Piper even added that with the facility’s use of iPads and free apps for iOS and Android devices, inpatient veterans could monitor their symptoms, identify coping strategies and locate more resources on topics such as insomnia, mindfulness, alcohol use and PTSD.

“It is also important to acknowledge the positive experiences that some veterans have reported. Some have shared that they’re feeling more connected with loved ones and more connected with themselves in tending to the simplicities of self-care all due to the pandemic forcing other areas of living to take different shapes or stop altogether,” Piper said.

Researchers did note in the “Aging Veterans’ Mental Health and Well-Being in the Context of COVID-19: The Importance of Social Ties During Physical Distancing” article that due to their wartime experiences, while veterans are more vulnerable to stress brought on by the pandemic, some may also already have useful coping mechanisms for the general population.

In terms of actual transmission of the virus, there has been no indication that veteran populations locally are being affected more than other demographics, according to Dr. Brooke Decker, Director of Infection Prevention at the VA Pittsburgh Healthcare System.

“They are the same risk factors that are being reported by the Allegheny Health Department and, you know, other news sources, it really isn’t different,” Decker said. “People who are attending gatherings, who are interacting with other people and not wearing masks. We’re understanding more about the disease as time goes on, and it really does seem that that’s how it’s transmitted. So if you stay six feet away from people, and if you wear your mask, you’re not likely to get it. Now, I don’t know that there’s anything that we know of that’s necessarily specific to veterans. In fact, I think our veteran population has been pretty good about following these requirements.”

On Monday, Dec. 14, 2020, VA Pittsburgh was announced to be one of 37 VA sites in the country to receive shipments of the FDA authorized COVID-19 vaccine created by Pfizer-BioNTech. In the announcement, VA Secretary Robert Wilkie said the “ultimate goal is to offer it to all Veterans and employees who want to be vaccinated.”

That has since been expanded upon and, on March 23, 2021, in an effort to vaccinate more veterans, VA Pittsburgh announced that it eliminated the age requirement for eligible veterans to receive the vaccine at one of their facilities or clinics.

“The reason we’re so concerned is because of the age factor,” Nemchick said during the notable spike of cases in December of 2020. “I’m blessed, I’m in good health…there are other guys with diabetes, obesity, other issues…plus our age factor. Again, I’m one of the younger veterans of this era. It’s a great concern to all of us. This spike is overwhelming.”