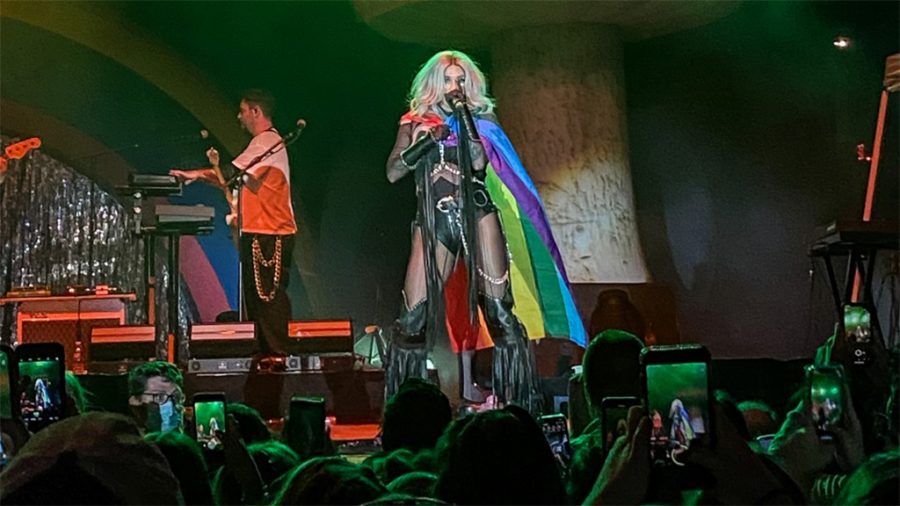 As a 10-year-old in 2011, the lyrics to Kesha’s smash hit “TiK ToK” were ingrained in my head better than multiplication tables. So much so that I actually dressed up as Kesha for Halloween, decked out in a union jack shirt, black skirt, leather gloves, blue sunglasses and hair feather, and of course colorful, outrageous Kesha makeup. Needless to say, things came full circle for me when I saw Kesha with opening act Betty Who live outdoors at Stage AE on Sept. 9.

If you don’t recognize the name Kesha, you might’ve been living under a rock for the past 12 years. She shot to stardom in 2009 with her debut single “TiK ToK” which encompassed the partying atmosphere that teenagers love into a song. From there, Kesha continued to release crazy, party songs and earned herself recognition as an off-the-rails pop artist. Many parents wanted tier children to stay away from Kesha, whether it was because of her revealing outfits or her songs and attitude about drugs, alcohol and sex. Nevertheless, Kesha defined the generations of Millennials and Generation-Z and that especially showed at her show with crowds full of young adults ready to party.

The first thing that needs to be known about a Kesha concert is that things are bound to get crazy. From the start, there are people pre-gaming right outside the gate, dressed in tight, short, rainbow clothing. In fact, if you’re either sober or dressed in social normative clothing, you’re the minority at a Kesha show.

After waiting two hours after doors opened, the show finally began. Betty Who is an Australian pop singer with the same sex-positive influence as Kesha. She came on stage in black pants and a red tank crop-top followed by her two male backup dancers. Who gave an energetic start to the show with her dance moves and interaction with the crowd. Even with having no clue who she was prior to the show, I felt my body move and head bop along as I was entranced with her performance. The only negative aspect of the opener was the sound mixing. It is harder to mix sound at an outdoor show, however, Who’s mic was down so low that she could barely be heard even mid-crowd. Her backing track was also turned down low which resulted in Who seeming miles away even though she was only about 15 people away from me.

While Who was a warm-up to Kesha, she did not at all prepare the crowd for what was about to come once Kesha hit the stage. The stage change between Who and Kesha took about 30 to 40 minutes. The reason for this time was evident as a gigantic blow-up cactus, white tiger, rainbow, and mushroom slowly blew up on stage. But nevertheless, as soon as the lights went out and Kesha took the stage, time was no longer an object, and the crowd pushed forward so that no one had any space to themself.

Kesha’s entrance to her first song “Cannibal” was one not to be forgotten. With a roar forming over the crowd, she appeared covered in leather stars connected by chains and a tight black bodysuit, leading out her two backup dancers on dog leashes wearing full face coverings that resembled red ball gags over their mouth.

While Kesha’s vocals are just as good live as on her albums, what truly makes her shows so phenomenal is her theatrics and dancing. This first song set the stage for the rest of the concert as Kesha danced provocatively around the stage with her dancers, no spot of anyone on stage was untouched. But the pièce de résistance of this song was Kesha tying up one of her dancers to a wooden board as she proceeded to bite out one of his organs and shower the crowd in glitter that poured out of the fake organ. Again, nothing can prepare you for a Kesha concert.

From there, Kesha continued to play through various other old hits like “We R Who We R,” “Timber,” “Your Love Is My Drug,” and “Take It Off,” and “TiK ToK.” I was honestly impressed that Kesha performed all these songs just like she would’ve back in 2009. It actually felt like I was at a ridiculous house party, jumping along to the beat in a packed crowd of people. She knew every word still and interacted with the crowd throughout each song as she read signs from audience members and even grabbed a rainbow pride flag from someone at the barricade to parade around in during “Take It Off.”

Even though she transported fans back in time with old hits, she made sure to include newer songs that show a different side to Kesha. Specifically her slower songs “Rainbow” and “Praying” present the vulnerable side to her. Fans swayed and screamed out every lyric to these new songs just like they did with the old ones. I even had multiple girls crying around me as the atmosphere went from party central to a heartwarming sense of community.

The concert was eventually finished off with the hit song, “Blow.” This provided the perfect opportunity for glitter, streamers, and confetti to go everywhere. It made all my dreams as a little girl come true as I felt fully immersed in the world of Kesha.

I will say, a Kesha concert isn’t for everyone. Even I, as a concert veteran, had a hard time dealing with the pushy and sloppy drunk/high crowd. Not to mention, it’s going to be a show littered with sex and drug positivity with the embrace of being whoever you want to be. So if you’re not open-minded, I don’t suggest going. However, for me as a lover of inclusion and “freaks,” I was in heaven with the risque, open-hearted show that makes sure no audience member feels alone.