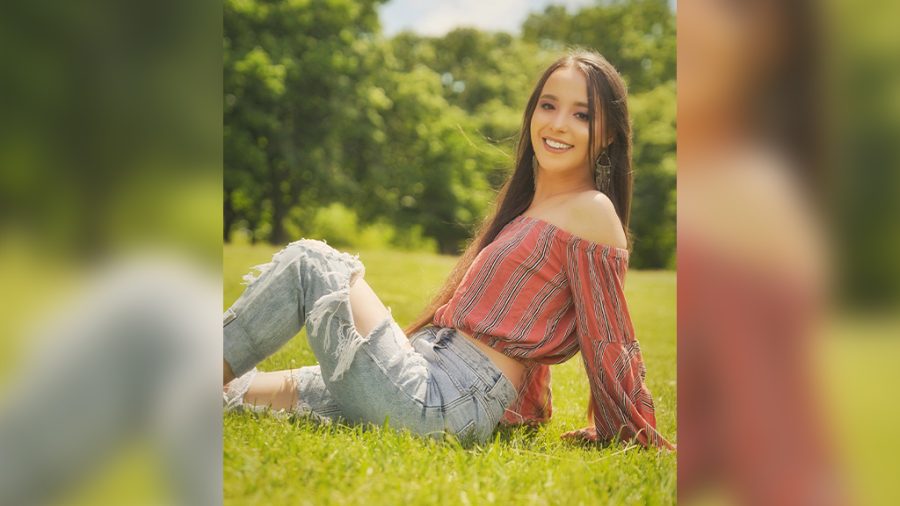 Cesca Violet is a senior sports, arts, and entertainment management (SAEM) major who, like many students, has always had a love for the entertainment industry. Though Violet’s love for entertainment extends a bit further than others. Not only does she explore the music industry in her academic life, but she has encased herself in the scene by becoming a musician herself.

For Violet, songwriting is something she explored from a young age. At the age of only four, she would attempt to write songs based on the melodies that she would hear. Little did she know, these moments would be the catalyst for starting her career as a musician.

“As time went on, I got into piano and guitar and that got me to start putting the melodies and lyrics I had along with instruments,” Violet said. “I’ve had a long evolution when it comes to music. I’ve done talent shows, and theatre, and even was in a band for a year. Now I’m finally going solo and putting out my own music for the first time, it’s exciting.”

It wasn’t until Violet came to Point Park that she was able to dive deeply into what a musician’s career actually looks like. As an SAEM major, she has had opportunities to take classes that show her all the moving parts behind an artist and their success.

“In SAEM, you have choices to take specific focus area classes,” Violet said. “You learn about every aspect of other people’s jobs in the artist’s career. It’s really helpful as a DIY artist to understand those things. I used to think people would just get lucky and blow up but from the business side I’ve learned it’s more calculated than that, you send out press releases and are constantly marketing, that’s what gets your name out there.”

Not only has her major been a huge part of her transformation as an artist, but so has her latest opportunity of being named one of Pioneer Records’ Pioneer Stars for this year. Each year, Pioneer Records chooses from a number of student musicians to take on the honor of Pioneer Star, meaning these students get to polish their music careers with Pioneer Records by recording an original single, playing an EP release show and even creating their own brand identity.

“This is my third year in a row that I’ve actually applied for Pioneer Star, but the evolution of my music over these past three years is really the reason I think it worked out this year,” Violet said. “By this last year, I was finally getting my music to a place that felt like me and not just influences from other people. So it has been awesome to be recognized for that, and I’m so grateful for this opportunity.”

Already Violet is taking small steps with Pioneer Records towards making her name known in the music scene of Pittsburgh. She recently hosted the organization’s return to open mic nights at Gasoline Street Coffee Company and is working towards creating her musician identity with graphic designer Olivia Davis and Red Caiman Studios.

“I just had my first pre-production meeting with Jesse at Red Caiman Media, and we went through songs and picked one out which was a really great experience,” Violet said. “It’s awesome to work with people who know what they’re doing because it helps consolidate your vision for the song and puts your artistic vision in good hands. I’ve even been working with Olivia at Pioneer Records on branding so there’s been a lot of stuff going on.”

Creating a brand has been one of the most important parts of her journey at Point Park, not only for her musician side but for her business side as well. It’s something that she has been working on for a long time but now she’s ready to finalize her image.

“With my major, creating a brand for myself has definitely been more than the forefront,” Violet said. “I’ve been struggling to create a brand, so it has been really cool to work with other creatives on it and get their impression of me. You want to think about how your audience sees you, and I’m getting to see that now. A lot of what I do, I do by myself so it’s been nice to be in a collaborative environment.”

Not only has the position of Pioneer Star helped her to work on herself professionally, but it has also helped her to grow internally and overcome some of her fears. The coronavirus pandemic hit hard for a lot of musicians, and after being isolated and not playing out for a long time, Violet started to develop deeper anxieties that the pandemic only continued to accentuate. Then in December, she got sick with a cold that caused some damage and scratchiness to her voice that still is affecting her today.

“I haven’t been performing out as much as I’d like to be due to some of the issues I’ve been having, so I am looking forward to getting myself back out there again,” Violet said. “Doing open mic nights has been great because they’re low-pressure situations where you get to meet tons of people. I’ve been able to test out new material and work on putting together a longer set than I’m used to.”

From here, Violet will release her single with Pioneer Records and perform at the EP release show before graduating at the end of this semester. She hopes to use these last few months at Point Park as an opportunity to push herself further and gain as much experience as she can to shape herself.

“I’ve only released one song so far called ‘Name in Lights’ so this whole experience is going to be a stepping stone for me to consistently put out music and consistently play out,” Violet said.

“I’m really looking forward to building and developing as an artist and a person in these next months.”