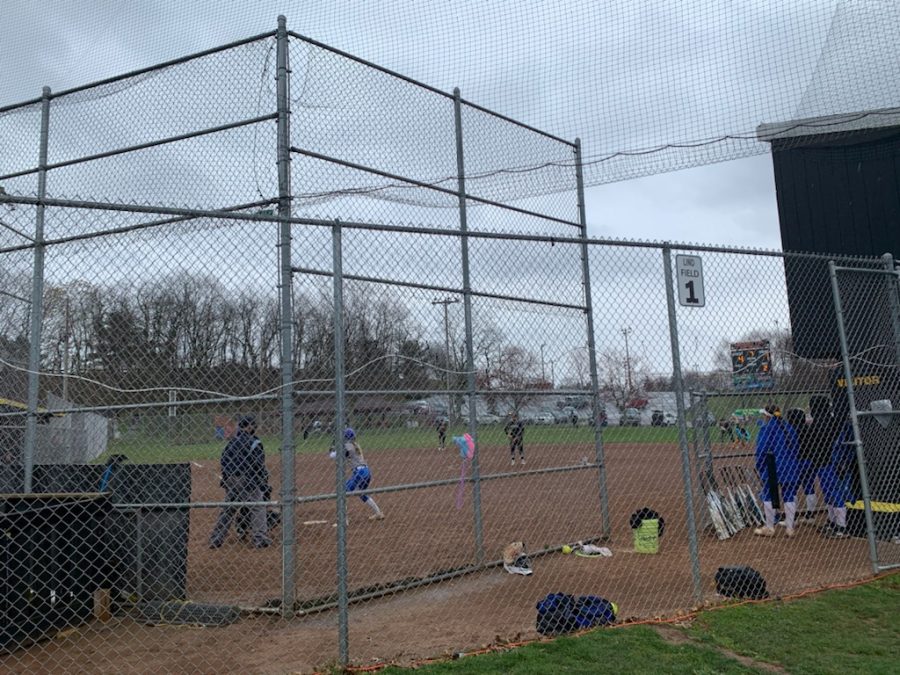 The Point Park Pioneers softball team played their first two home games of the season on a cold and rainy Friday afternoon. The players were ecstatic to play in their first home game against a River States Conference rival (RSC).

On March 25 at 1 p.m. and 3 p.m., the Pioneers took on the Midway University Eagles in a doubleheader at Fairhaven Park in Kennedy Township. Senior catcher Hailey Leitner said she loved getting to play in front of their home fans in attendance for the first time in awhile.

“I love playing at home around all of our fans and having our own stats people there and having photography there,” said Leitner. “We don’t get to have photography very often so it made it even better.”

The Pioneers entered the game with a 9-7 record, along with 2-0 RSC conference record. In their last double header, they had played the Siena Heights University Saints and split the series, losing the first game 5-4 in 8 innings and winning the second game 4-2. In their last RSC matchup, they had won both games of the doubleheader on the road against the West Virginia Tech University Golden Bears, winning the first game 7-5, and the second game 4-2 in extra innings.

Midway came into the game with a 15-4 record, along with a 5-1 conference record. The Eagles had dominated the Carlow University Celtics on the road in their last series, sweeping the doubleheader. They won the first game 5-1 and the second game 10-2.

Point Park junior Angalee Beall got the start for the Pioneers in game one. In the first inning, both Midway’s Carson Flynn and Mary Andres reached base on singles and freshman infielder Kennadi Thompson drove in the game’s first run on a single.

The inning went downhill for the Pioneers. Midway pitcher Madison Ludwig reached first on an error with two runners on which led to another run. Eagles infielder Lauren Lingafeller reached on a fielder’s choice, and Ludwig advanced to 2nd on an error. This led to a 3-run home run by senior Alyssa Yates. The Pioneers recorded three straight outs, but the 1st inning damage was done. The Eagles led by the score of 6-0 with only one of those runs being an earned run due to three Point Park errors in the 1st.

Ludwig was the starting pitcher for Midway. In the bottom of the first, senior Taylor Goldstrohm became the team’s first base runner after a walk. Nevertheless, Ludwig retired the next three batters, sending it to the top of the second. The Eagles pushed another run across after a double by Lingafelt. Nonetheless, Beall got out of a bases loaded jam, and Midway would strand three runners.

The Pioneers had baserunners in the early stages of the game, but the Eagles pounced on every opportunity to get out of the inning. In the first 3 innings, Point Park’s lead off batter reached first, but the team remained scoreless. In the top of the 4th, Ludwig hit a solo home run, helping out her own cause. This increased the Midway lead to 8-0.

In the bottom of the 4th, the Pioneers scored their first run on a fielder’s choice by freshman Melanie Taylor, which drove in sophomore Sydnie Reese.

Both teams remained scoreless in the fifth, but the Eagles tacked on three more runs off of two hits and two Pioneer errors. The Eagles held the Point Park bats in check and won by the score of 11-1.

The Pioneers had just 4 hits in the first game. The Eagles had only 12 hits despite scoring 11 runs. Leitner, who went 3 for 3 in the first game, knew that she and the team needed to make adjustments.

“Our mindset was that we need to forget about the first game. Mistakes happen,” Leitner said. “We just have to capitalize and try to work through all the mistakes that we made in the first game and try to do a lot better than what we did because these are important games. These are games we need to win, and we all realize that.”

Goldstrohm, who is the team’s lead off hitter, shared a similar perspective.

“That was definitely a tough loss for the first game, but we just needed to forget about it and focus on the next game,” said Goldstrohm. “I think that we definitely need to learn from our mistakes, and we need to stop making the errors that we’ve made in the first game. And we need to get the hits that we have to so we were just trying to change the momentum.”

Ludwig also pitched game two for the Eagles. In the bottom of the 1st, Goldstrohm grounded out to short to start the bottom of the inning. Senior center fielder Carissa Scekeres singled with one out and Taylor followed up, grounding out on a dribbler to the catcher. Leitner, who was the designated hitter, reached first on a single, but Scekeres was thrown out from right field to third base, ending the inning.

In the 2nd inning, the Pioneers found themselves in a jam with the bases loaded with one out. Simon struck out Flynn looking, but Andres drove in the first run of the game. On the play, Eagles infielder Taylor Dukate was pegged down at the plate on a throw from Taylor to junior catcher Cristina Sargent. This ended the top half of the 2nd.

Reese singled to begin the bottom of the 2nd. Junior right fielder Cameron Meier bunted Reese over to second. Later in the inning, the Pioneers tied the game 1-1 after a single by Sargent, which led to a throwing error by the Eagles. Senior Jodi Frontino grounded out to end the inning.

Simon then retired the side and recorded three straight outs in the top of the 3rd. However, Point Park matched the Eagles and did the same by going down in order.

In the top of the 4th, the Eagles broke the scoreless tie. Flynn batted in the 2nd run of the game with Lingafelt crossing home. With a runner on first and third, Flynn swiped second base, which was the team’s second stolen base of the inning. Andres then drove in both runners from 2nd and 3rd, extending the Eagles lead to 4-1.

The Pioneers shut down the Eagles bats after the 4th, but the Pioneers offense struggled in key situations. Despite stringing together three hits in the 6th, Point Park left their runners stranded. The Pioneers played better in the second game defensively, but fell short, losing 4-1.

Ludwig threw back-to-back complete games for Midway. For Point Park, Leitner had a productive day at the dish, going 2 for 2 in the 2nd game and going 5 for 5 in both games combined. She looks to continue her success for the rest of the year.

“I’m really trying to stay out of my head and stay off of the statistics and really just focus on the game and have fun,” said Leitner. “I get a fifth year to play, but I’m gonna play as if I’m not playing next year. I just need to stay focused.”

Despite the success, Leitner and Goldstohm both believe that the team left too many runners left on base. Goldstrohm, who went 1 for 3 in the second game, wished her and the team made adjustments in the 2nd game.

“We saw that pitcher the whole game and she pitched back-to-back games, so we should have gotten on her,” Goldstrohm said. “We didn’t make that adjustment, and we need to make more adjustments going on to the other games that are in our section.”

Timely hitting was an issue for Point Park. Leitner agrees with Goldstrohm and said she believes that she and the team can make this adjustment by playing a cleaner game and by making better decisions.

“I feel like the only thing that we can do to do improve our timely hitting is to not swing at bad pitches. It seems like, especially during the second game, that we’re just swinging out a lot of balls that were really low in the dirt,” said Leitner. “I feel like we were just very anxious and trying to get that hit when we just need to calm down and just really focus on the ball.”
Despite the loss, Point Park remains in second place in the RSC East division. The Pioneers look to make a stay at the top of the standings and Leitner is excited to see how the season goes.

“I’m just very excited for the season,” Leitner said. “Our team seems to be so much more confident especially up at the plate, and I think we’re gonna do great things.”

Goldstrohm also looks forward to how the team can turnaround from their losses. She and the team look to prepare and improve as the season transpires.

“We definitely need to forget about those games and learn from the mistakes that we made. And I know that we can learn and improve upon that,” said Goldstrohm. “In practice, we definitely have stuff to work on. It’s still early so we’re just gonna go in with the mindset that we’re gonna have to attack the other teams first and not let that first inning really take us down.”